Ke Robinson Exhibit at The Museum of the Everglades 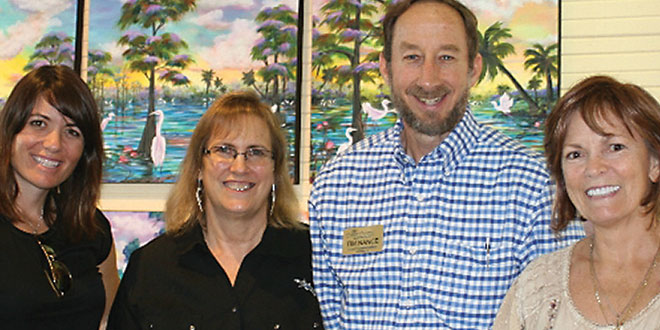 Ke Robinson is joined by her daughter, Collier County Commissioner Tim Nance and his wife Gayle at the exhibit reception at the Everglades Museum.

Bold colors marry traditional Florida flora and fauna in a whimsical blend of “tropical expressionism” at a new exhibit hosted by the Museum of the Everglades entitled “Tropical Art With An Edge” by Ke Robinson.

The Florida artist, who lives in West Palm Beach, was on hand Saturday, Dec. 6, to talk about her mixed media collection which made its debut in Everglades City. She spoke modestly of her work, explaining her inspiration behind the paintings of native Florida birds and alligators. “I paint what I please,” she stated.

Robinson is a self-taught artist who 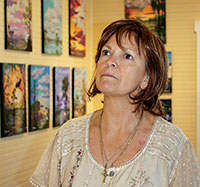 Ke Robinson exhibits her work at the Everglades Museum. PHOTOS BY PAT NEWMAN

claims to have “always sketched” and picked up some skills through workshops. Instead of working from photos, she paints in “plein air,” French term meaning painting outdoors. Her work has been described as abstract contemporary folk art painting.

The exhibit will be on display in the Pauline Reeves Gallery until Dec. 31. Located in historic Everglades City, three miles south of US 41 (Tamiami Trail) and SR 29, the museum explores more than 2,000 years of human history in the area. The museum is open Monday-Friday, 9 AM-5 PM. It is located at 105 West Broadway, Everglades City.