Kay’s on the Beach: A Stroll Down the Cat Walk 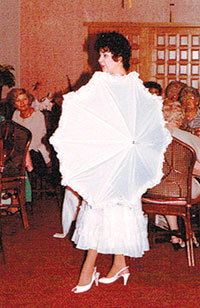 Helen Ann Perrin in 1976 at Kay’s on the Beach 1st-ever style show.

Helen Ann Perrin had been there before — a bustling dressing room frenzied with women making quick clothing changes, zipping zippers, fixing fly-aways and checking make-up. The first time was in 1976 when Perrin told her friend Key Hilt Folsom that she would love to be a part of the first-ever style show for Folsom’s Marco Island clothing boutique — Kay’s on the Beach.

Perrin remembered the day well. “My husband and I bought in Marco Island in 1976,” the Arkansas native reminisced. “I met Kay when she first opened her shop, and we became friends…The first fashion show was at O’Shea’s Restaurant on the beach…Kay had me dressed as Scarlett O’Hara with a parasol.”

Nearly four decades and a lot of bridge games and tennis matches later, Perrin was prepping for another stroll down the cat walk for the 38th Annual Kay’s on the Beach Style Show. The Valentine’s Day fashion extravaganza, held at the Marco Island Yacht Club, featured Perrin, Kay’s on the Beach co-owner and Folsom’s daughter Jeannie Hilt and nine more Kay’s regulars, all decked out in some of the boutique’s top-selling fashions.

The event began with a warm welcome from Folsom and another of her daughters, Kathy Ponto. The two women spoke of the events of the last year that brought Folsom back to her famed podium — a trip to Cambodia, the opening 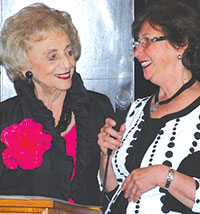 of a fifth boutique at the Promenade at Bonita Bay and a broken leg.

After the emotional introduction, the music played and the fashion flowed, with each woman strutting — and some even shimmying — through the Yacht Club dining room. Three rounds of style changes highlighted everything from casual resort wear to formal dresses fit for an evening walk on the red carpet. Owen Hennessey entertained the audience with his renditions of romantic favorites from “Phantom of the Opera” during the costume change.

Perrin donned a black dress and hat that even Audrey Hepburn would have envied. The highlight of the ensemble: Perrin’s vintage handbag that was designed to look like a bottle of champagne on ice.

When asked what brought her back to a Kay’s on the Beach style show, Perrin said, “Fashion and retail are things that I know.” After all, her mother opened her own line of women’s clothing stores in Arkansas when Perrin was a child, and Perrin has worked in some of Folsom’s boutiques through the years.