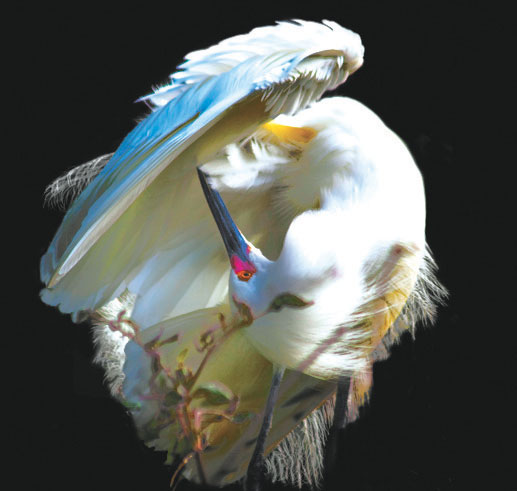 Marco Islanders who have visited Amantea Gallery in the Shops of Olde Marco may have seen some of Kathleen’s work. In an upcoming exhibit the Marco Island Library will feature Douglas’ imagery of coastal and migratory birds. “Intimate Moments” explores the intimacy, playfulness and intriguing behavior of the real deal snowbirds.

“Birds are our window into nature and play such an important role in our life-sustaining ecosystems–they are the bellwether for the environment. How they interact is fascinating and sometimes hilarious. It is captivating to watch them flirt, boast, swagger, dance, defend, nest and parent. They captured me and I them… they have put their song in my heart and I translate that to canvas,” chirps Douglas.

Kathleen’s imagery is a combination of photography and digital painting or in the words of the artist, “painting with light.” Her images, fused on canvas, take on a third dimension between the image and viewer. It’s that old subject to artist, artist to image and image to viewer—each translation is unique. Patrons often comment that it is difficult to discern whether one is looking at a painting or a photograph. Sometimes bold and dramatic, sometimes surreal, the viewer is challenged to ponder… what’s going on here?

Portraitist and Documentary Photographer, Kathleen Amantea Douglas muses that “wildlife and landscape photography is what I do for love.” Landscape is what brought her to photography many years ago when painting outdoors in a New England winter didn’t agree with her. That’s when she marched down to the local camera store and purchased her first 35mm camera and became swept up in a passion that has become her life’s work.

She started with a local camera club and then some darkroom classes in college and finally earned a master’s degree in photojournalism from Boston University. She worked for Associated Press and continued to study under master photographers in Boston, Maine and Italy studying portraiture and fine art.

She is an award winning photographer with PPA and In 2002 published a book on the Sicilian Easter Processions and the next year co-authored, Almost Perfect, a book documenting a medical mission in Vietnam working with children and adults with cleft palate. Almost Perfect won the publishing award for most life changing. Douglas works out of her studio on Boston Waterfront in summers and for the last three winters has run Amantea Gallery in the Shops of Olde Marco. She can be reached at: KathleenDouglasPhotography@GMail.com