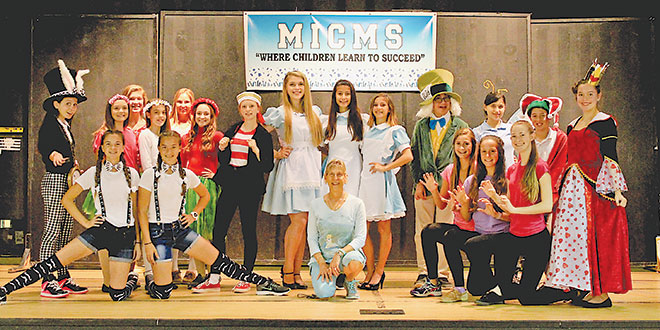 Karen Raymond with the cast of “Alice in Wonderland.” Submitted Photos

At seven, Karen Garriott was already interested in music, playing the piano.

In junior high Karen continued with piano, adding the school choir and singing at church in her hometown of Indianapolis.

She met Roger Raymond, a Ball State basketball player, who was pledging Lambda Chi Alpha with two of her friends. She had joined Chi Omega.

“He was fun to be with,” she said. “He didn’t have a radio in his car so we’d ride along singing Beetles songs.”

They married as juniors in college. The Raymonds will celebrate their 42nd anniversary on December 2.

After graduation they moved to Mooresville, Roger’s hometown. He taught at Center Grove High School. She taught at Monrovia High School. But it was music that led to formation of a band, made up of teachers and musicians still in college.

The band took its name, Morningstar, from the street where the Raymonds lived.

One of their first major gigs was playing at the Schuss Mountain Resort where a lot of Ball State singers performed. As small groups did, they played at Elks clubs and lots of proms.

“The band evolved,” Raymond said. “When Jennifer was born in 1980 that’s when the band decided to go on the road.”

“They were building the north tower,” she said. “We moved to Marco, buying a condo when they offered us the opportunity to be the house band in 1986. We played the Marriott through 1994.”

They continued playing every New Year’s Eve in the main ballroom until expansion led to the demolition of the ballroom two years ago.

By 1994 the Raymonds were year-round residents. Turning again to music, they bought a music store, Stan’s Music Stand. The new name, Morningstar Music.

Their next major gig became the Marco Island Charter Middle School when it opened in 1998.

Her title was choral

Photo by Roger LaLondeKaren Raymond was full of emotion while talking to Jane Watt and Kim Barry at the Raymond Going Away Run. Both women have athletes on the cross country and track teams that Karen served as assistant coach to her husband Roger.

music director, the only person to hold the position until she and Roger announced they were leaving in August for family reasons. Roger was the school’s first athletic director.

“We started out in portable classrooms,” she said. “The school was so small the band and choir performed together at Christmas and spring talent shows.”

STARZ became the name of the choral group that continued to grow in talent and size.

“Performances were in the United Church of Marco hall. It was difficult to coordinate. It got much better when the new school was built and we could have a stage in the Charter gymnasium,” she said.

Raymond said there were holiday shows and “Disney Junior” shows.

Before the new gym had a backdrop for productions, the contractor put a black curtain over doors and walls in the back of the stage.

For her final show this spring she brought back her first show, “Alice in Wonderland.”

“The first show was all new to everyone, we didn’t have the equipment and the lighting we have now. I wanted to do it again and do it right.”

“The last three years we had super attendance, between 400 and 500 people,” she said.

Through music and performances Raymond said she taught ”the whole child” and “the creative side.”

Lexi Harrington is a strong example. “Mrs. Raymond made a huge difference for me.”

Lexi moved to Marco Island with her family at the start of school year two years ago.

“Music helped me meet kids in my grade,” she said. “Mrs. Raymond invited me to sing the National Anthem at a middle school football game. When I did the football team turned around with that ‘who is she’ look. I started to know a lot more people.”

Lexi auditioned for “High School Musical” and Raymond chose her for the lead female role, Gabriella, that spring.

Lexi began to take singing more seriously, with her parents hiring a coach, Nancy Piles. Through Pile’s help she auditioned and made the Philharmonic Youth Choir.

“It was exciting. We combined our choir, the adult choir and the full orchestra in the annual Christmas show,” she said.

Lexi has also sung the National Anthem at two

A page from one of Karen Raymond’s shows is part of a special scrapbook made for the Raymonds.

For Raymond, Charter sports became another role for her to fill. She said, “When you are married to the athletic director you get roped in.” She served as an assistant in cross country and track. She also served as public announcer and scorekeeper for Roger’s middle school basketball games.

“I thoroughly enjoyed my coaching. The kids were wonderful. I have a great deal of admiration for how hard they work and what they give,” she said.

“In music and sports they learn alot about themselves. They learn how to work as a team. They buy into that wonderful life of sharing.”

The Raymonds have two children who did well in sports and in life.

Jennifer, now 36, starred on a Lely softball team that was runner-up in the state in 1998. She sang as a young lady with Morningstar and earned her degree in musical theater at the University of Central Florida. She has held musical roles at Sea World and Disney World. She has a recurring role as “Dory” in “Finding Nemo” at the Animal Kingdom.

Her voice can still be heard at Lely and Marco school sports events, singing her recording of the National Anthem.

Jessica, now 29, was part of the outstanding Lely cross country team that finished as state runner-up in 2002. She earned a degree in education at Florida International University. She teaches fifth grade in Osceola County. She and husband Kris have a son, Logan, 4.

Karen is going into the private sector, working for a non-profit arts enrichment program in Orlando. All the details aren’t finalized, but she will be working with middle and high school students. Roger is coaching cross country and basketball at Osceola High School near Orlando.

“We have spent 30 years in Marco and will miss all that Marco has to offer,” she said. “I’m going to miss the kids and all the wonderful parents I have met through music and sports. It was wonderful to see the Charter School grow and be a part of the experience.”