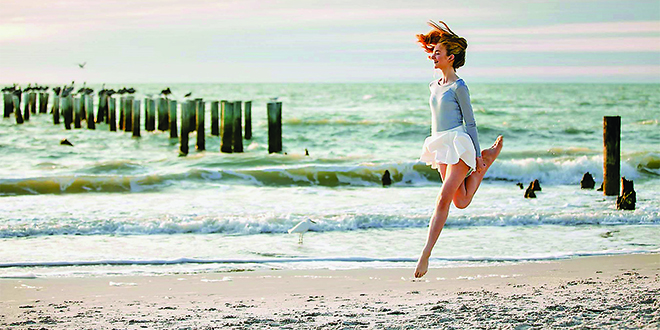 Submitted Photos | Kaitlin Creedon; “I danced in the moon and the stars and the sun.”

In our community, those lyrics could be changed to end with “said she.” Meet Kaitlin Creedon, Marco Island’s angel of Irish dance. The daughter of Kelly and Keith Creedon and the granddaughter of Marco Islanders Jack and Joanne Creedon, Kaitlin is a sophomore at Marco Island Academy who is well on her way to becoming a World Champion Irish dancer. She has a 13-year-old brother, Jack, who is not a dancer and prefers baseball and golf, but does enjoy watching his sister compete.

On April 12, Kaitlin will be competing in the 2017 World Irish Dancing Competition in Dublin, Ireland. This dream come true could be seen as the fulfillment of the well-known Irish blessing, “May the road rise to meet you.” This road has been a journey of love for Kaitlin, but it has also been a road of dedication, commitment and hard work.

Her mother’s family is 100% Irish, so Kaitlin learned about Irish culture and heritage beginning at a very young age. Kaitlin began Irish dancing at the age of 7, instantly knowing that she had found her passion. When Kaitlin joined the world class Flanagan-O’Hare School of Irish Dance in Naples just a few years ago, her true competitive spirit was born. Instructor and Irish dance champion Michael O’Hare said, “Kaitlin is one of my most dedicated students over the past 35 years. Her work ethic is above and beyond. She only became my student about 2½ years ago and has rapidly become a champion dancer. That does not happen to most 15 year olds.”

The Flanagan-O’Hare School of Irish Dance is endorsed by An Coimisiun Le Rinci Gaelacha (Irish Dancing Commission) in Ireland. Michael O’Hare and his wife Eileen Flanagan-O’Hare, also a certified Irish dance instructor, operate schools in Naples and Bloomfield Hills, Michigan. Many of their students have competed in World Championships and have performed in the Broadway shows “Lord of the Dance” and “Riverdance.” One of their students recently performed 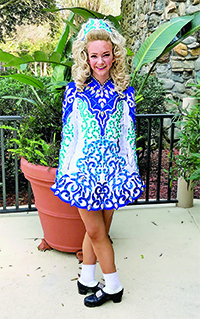 at the Presidential inauguration. Michael O’Hare remarked at the similarity between the dance styles of this particular dancer and Kaitlin Creedon, saying “I see great things coming in Kaitlin’s future.” The O’Hare’s have recently been joined by Geraldine French, who formerly owned and operated a school in Australia. She has trained three World Champion winners, including her own daughter, Nicole.

Kaitlin Creedon trains six days a week for 2-3 hours per day; Three days at the school and three days at home, with one day of rest. According to Kelly Creedon, “Kaitlin breathes, sleeps, eats and repeats Irish dance!”

The Gaelic word for Irish dance competition is Feiseanna, shortened to Feis (pronounced “fesh”). Kaitlin is an Open Champion, the highest level in Feiseanna. To reach that level, Kaitlin won two first places in back to back competitions in 2016. Then she went on to compete in four major competitions for those in the Champion level. In December 2016, she placed 17th out of 130 Champion dancers in her age group, qualifying her to compete in the World Championship in Dublin during Easter week.

The art of competitive Irish dance requires tremendous athleticism. When Irish feet are dancing, they enact two to three minute intensely aerobic bursts of steps, performing one hard shoe round, a soft shoe round and then a set dance. In competitions, the girls wear wigs, tan their legs and wear unique one-of-a-kind dresses, many of which are specially made at Taylor Dresses in Belfast, Ireland.

Kaitlin and other dancers from the Flanagan-O’Hare School will be performing in the parking lot of Jack’s Lookout, 951 Bald Eagle Drive, Marco Island (Kaitlin’s grandfather’s bar at Rose Marina) on Wednesday, March 15 at 7 PM. All are welcome! The dancers took stage at Jack’s Lookout last year and it was spectacular!

For Kaitlin’s journey to the World Championships, we wish her well, saying, “May the road rise to meet you. May the wind be always at your back. May the sun shine warm upon your face, and until we meet again, may the Lord hold you in the palm of his hand.”

The family has created a Go Fund Me page at www.gofundme.com/kaitlincreedon for those who would like to help with the expenses of the trip to Ireland for the World Championships.