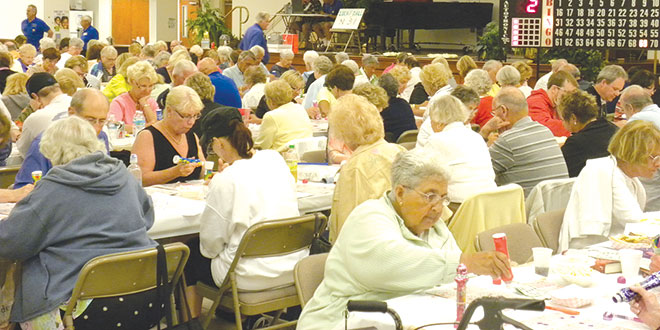 Bingo! The crowd at a recent Knights of Columbus bingo night drew a record crowd of 303. SUBMITTED PHOTOS

The 10th bingo session of the season for the Knights of Columbus at San Marco Church was one to remember, as 303 players packed the parish hall. It was the most ever for the fraternal organization’s bingo fundraising program.

The attendance surpassed a previous record set earlier this season.

The Grand Knight of the San Marco K of C said, “It’s been a perfect storm for our bingo program this year. The weather has cooperated both here and up north — good here, bad there. More people seem to have come 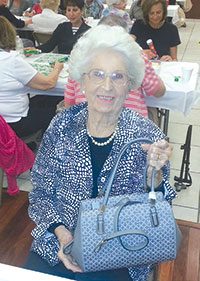 to the island this season. The economy is better. We have given away a Coach bag as a grand prize every bingo night, except one, and our experienced Knights and Columbiettes have been able to handle the crowds. Our attendance is up almost 20 percent this year.”

Alice Palys of Marco Island won the Coach bag on the record-setting evening and called the prize “beautiful.” A regular at K of C Bingo, she said she had been hoping to be one of the handbag winners. A Coach bag will be 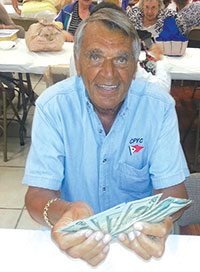 Andy Rapchuck left San Marco Church with an extra $150 in his pocket.

the special prize at all bingos this month and next. Andy Rapchuck of Winthrop Mass won $150 as a first-time visitor to the Thursday night games.

The profits from K of C fundraising are donated to the disabled and needy of the area, including Habitat for Humanity, the soup kitchen in Immokalee, bike safety on Marco, the Catholic Faith Appeal and many other worthy causes. Knights’ donations also include college scholarships for local students.

Knights of Columbus and Columbiettes, the women’s arm of the organization, are all volunteers working as cashiers, floor attendants and bingo callers.