JW Marriott to be World-Class

Simply put, it’s the largest project of this magnitude ever undertaken in South Florida, and it’s going on right here on Marco Island.

The conversion of the Marco Island Marriott Beach and Golf Resort to a JW Marriott Branded Resort will have a long lasting and positive effect, as it brings the prestige of being the only waterfront JW Marriott and the world’s attention to its longtime home here on Marco Island. 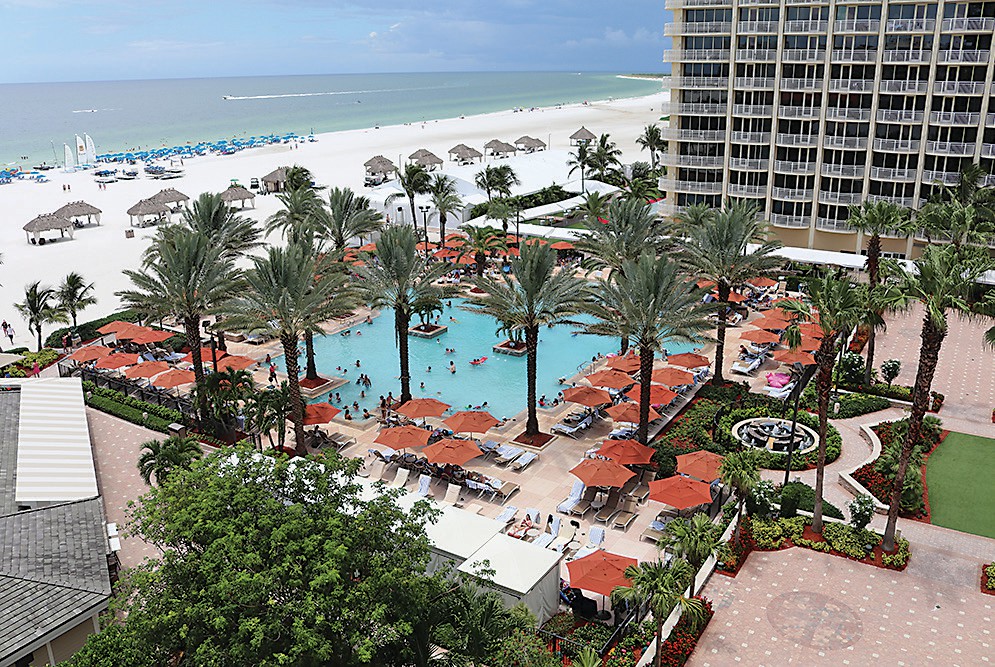 One of the two ground level pool areas that was expanded and updated. Photo by Steve Stefanides

in May of 2015. The schedule for completion of the newly designed and constructed conference facilities is targeted for early fourth quarter of this year. The adults-only room tower and its related amenities are scheduled for completion in early first quarter of 2018.

The project began 27 months ago as the entire lobby, reception area, support facilities and guest rooms in what they refer to as the North Towers underwent a major redo, as did the pool areas and 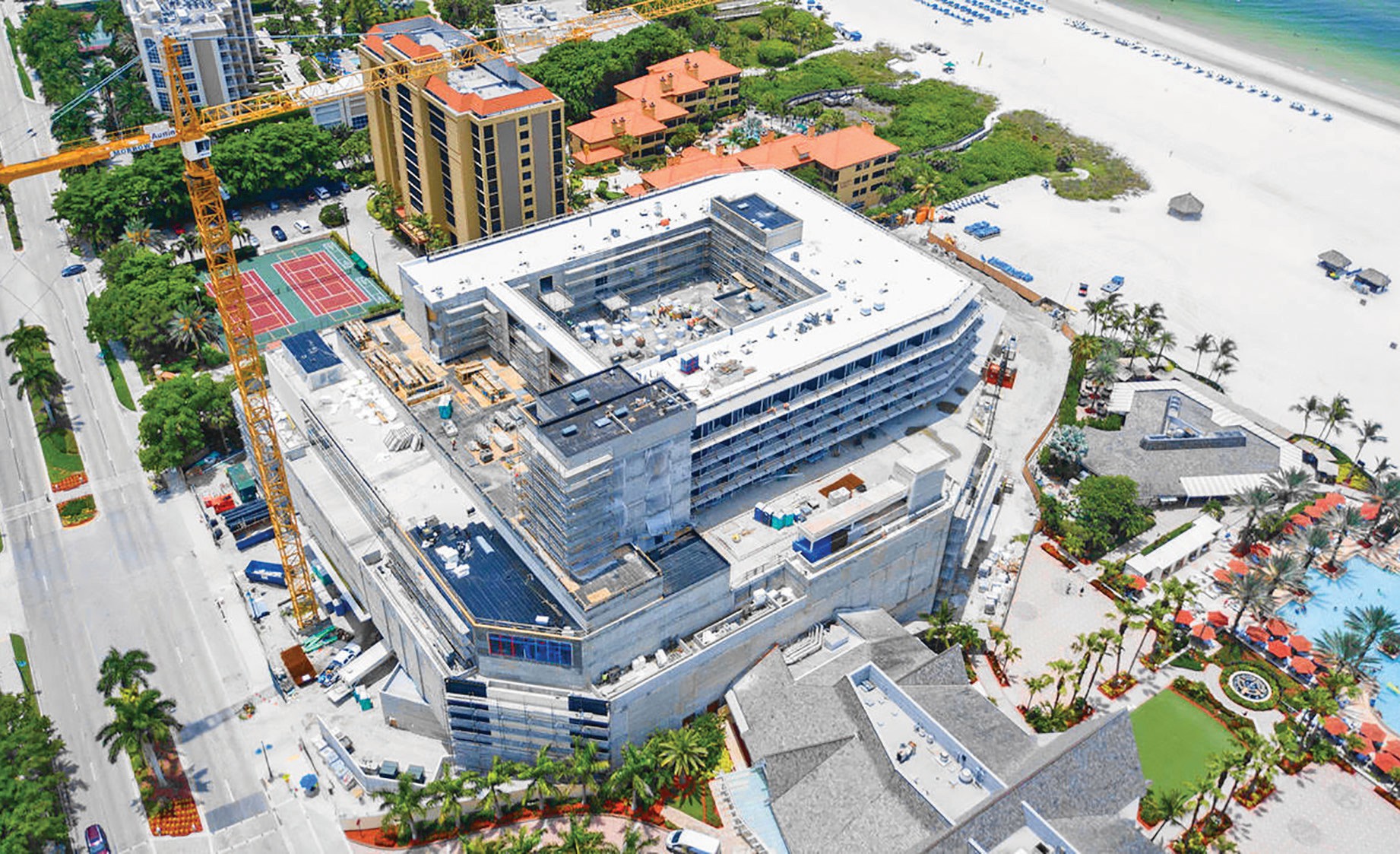 In addition to those renovations, new office space was carved out of areas not previously utilized below the main reception area, in addition to new employee support facilities and an entire change out of the laundry facilities, which will handle the expanded capacity of the world-class resort. Those laundry facilities are something that will allow the facility to recycle and cut down on their water consumption by state-of-the-art technology, as well as the addition of new environmental 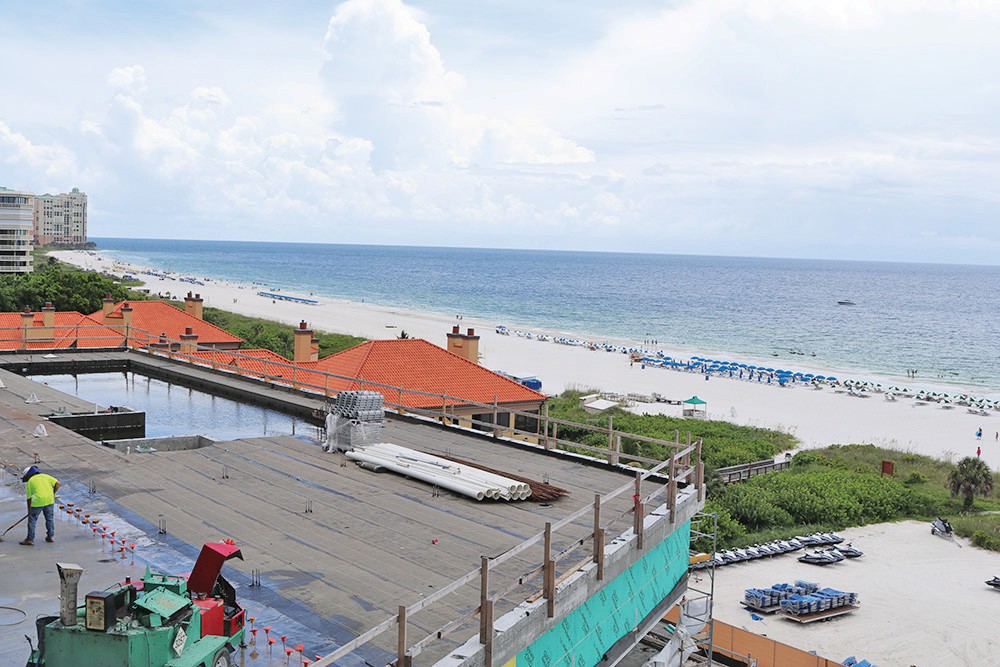 Prepping the surface for the pool/spa area for the new rooms and deck.

and cooling plants that service the entire complex.

In addition, the facilities maintain, treat, recycle and utilize much of the other water consumption and storm water within the property, making it an extremely “green” operation, according to Rich Lutz, director of engineering for the property.

In keeping with the JW Marriott’s efforts to make guests feel welcomed upon arrival, they are met when they enter the sprawling and well-lit lobby by associates that handle their every need. “We 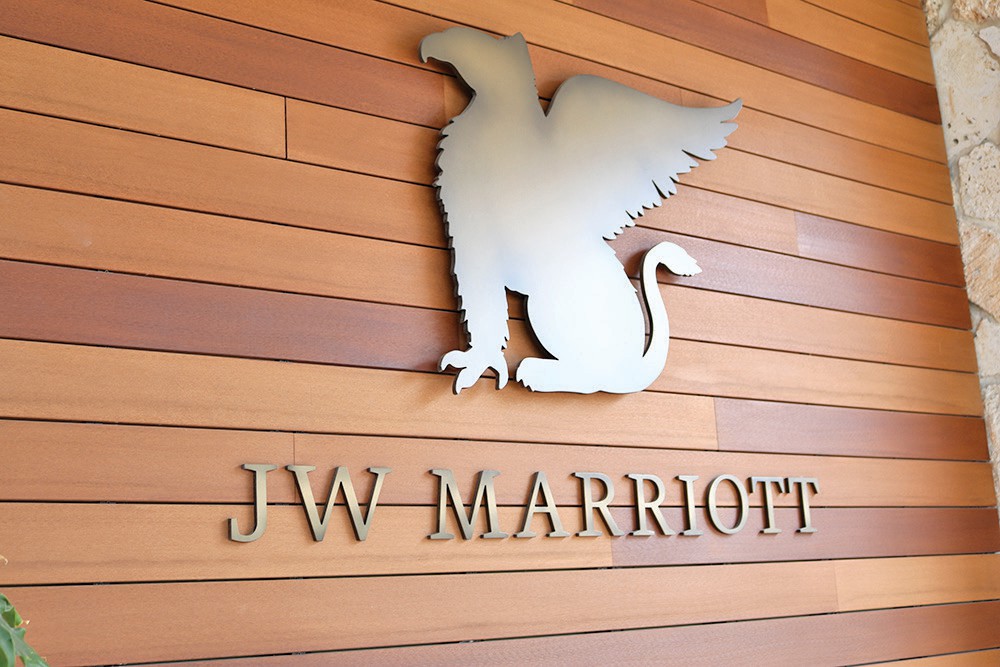 want our guests to feel very special when they first step foot onto the property. From the time they pull up to the front doors to the day they depart the property their experience is meant to be extraordinary,” said Rick Medwedeff, the longtime general manager of the property, at the outset of the project. State-of-the-Art Conference Facilities 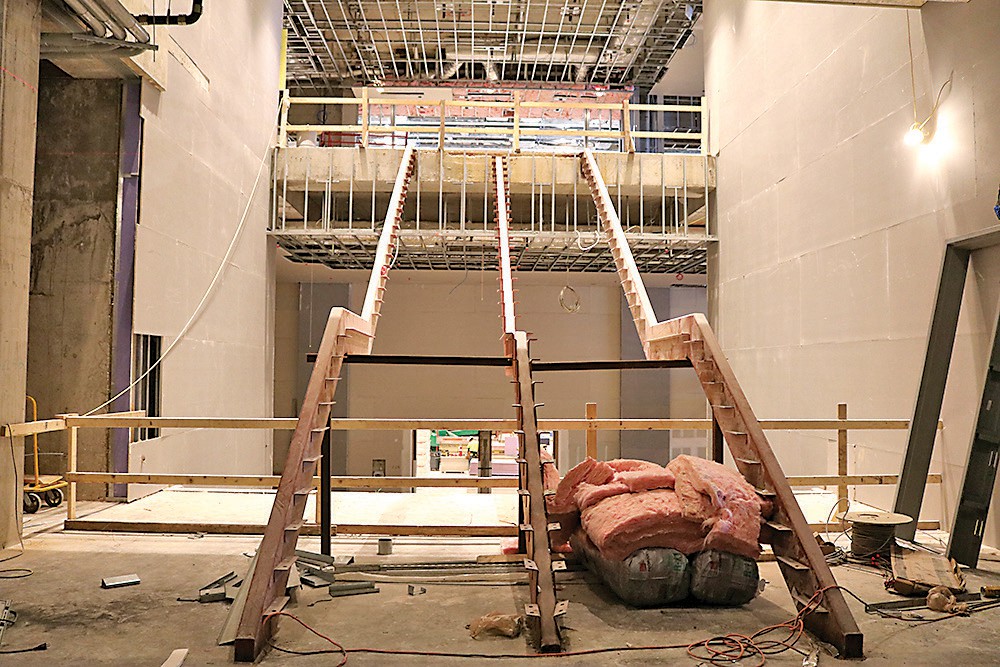 Grand staircase up to the Calusa Ballroom and Conference Area.

Marco, they recognized the changing requirements of their clientele. The older ballrooms had extremely low ceilings and there was minimal “breakout areas” to offer smaller rooms for meetings and hospitality functions off the main conference and ballroom areas.

The older outdated space did not accommodate the need for state-of-the-art audio/ visual presentations, which had become a staple within the world of conference offerings. “We are in a very competitive environ ment in regards to what meeting planners are looking 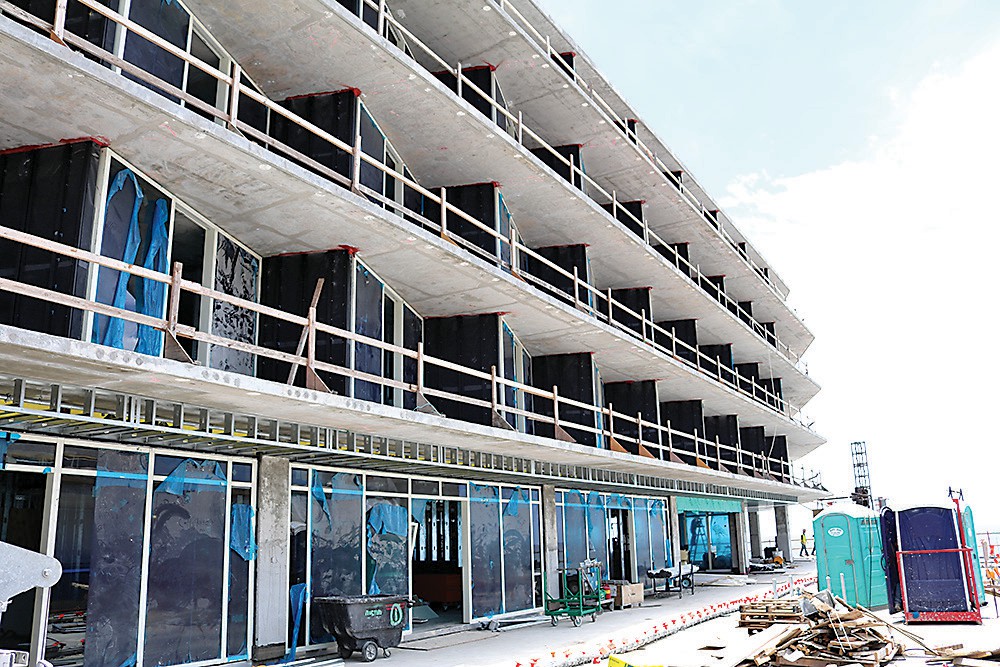 Ninety-one new adult-only rooms and suites above the new conference and ballrooms.

for. These enhancements, our location here in paradise and the quality of our staff will make us the industry standard for long into the future,” said Medwedeff.

The new Banyan Ballroom will encompass 17,000 square feet on the second level of the newly constructed conference and tower building. It will be capable of being petitioned off into smaller areas and utilizes 22-foot high ceilings with another 18,000 square feet of pre-function area, something that was sorely lacking in the 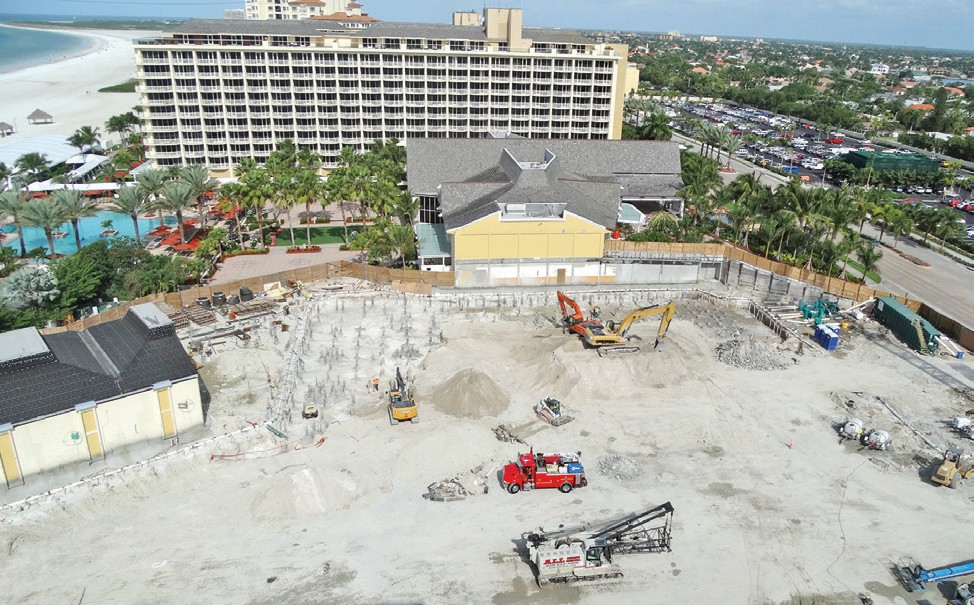 outdated conference area prior to demolition. The third level houses the new Calusa Ballroom that boasts another 30,000 square feet of usable conference area, with more breakout and pre-function areas. It also is capable of being divided into smaller spaces as the need arises. Taking Advantage of the View 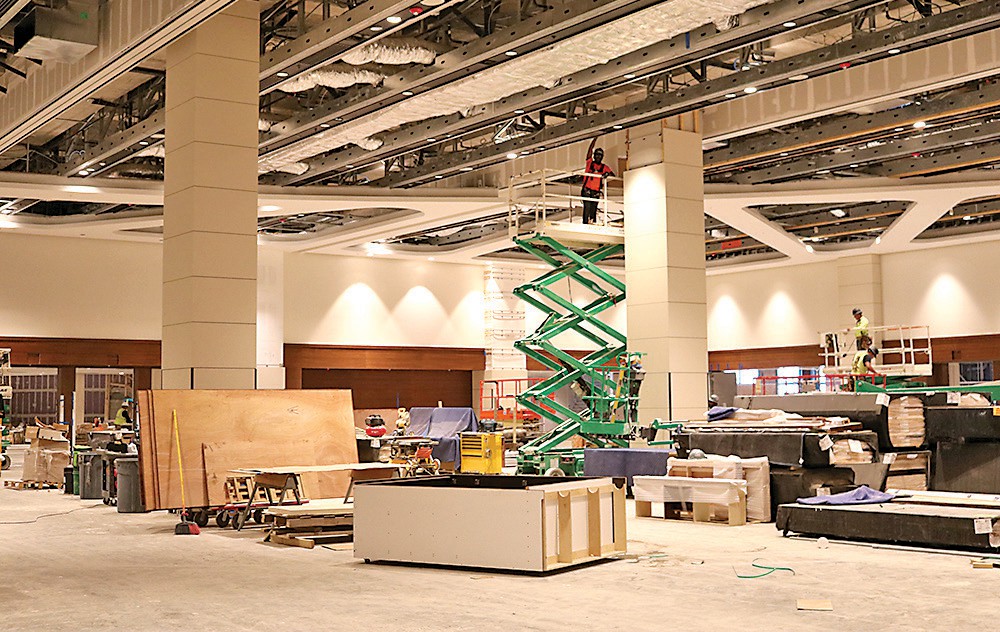 of Mexico, along with the wide white sandy beach that which can be seen from many vantage points. Whether enjoying a breakout between conference activities or a reception on the expansive balcony off one of the two major new meeting spaces the planners have truly captured the breathtaking view as part of their package to sell to meeting planners considering Marco Island for their next function or conference.

In addition, the new tower will provide space for a 12,000 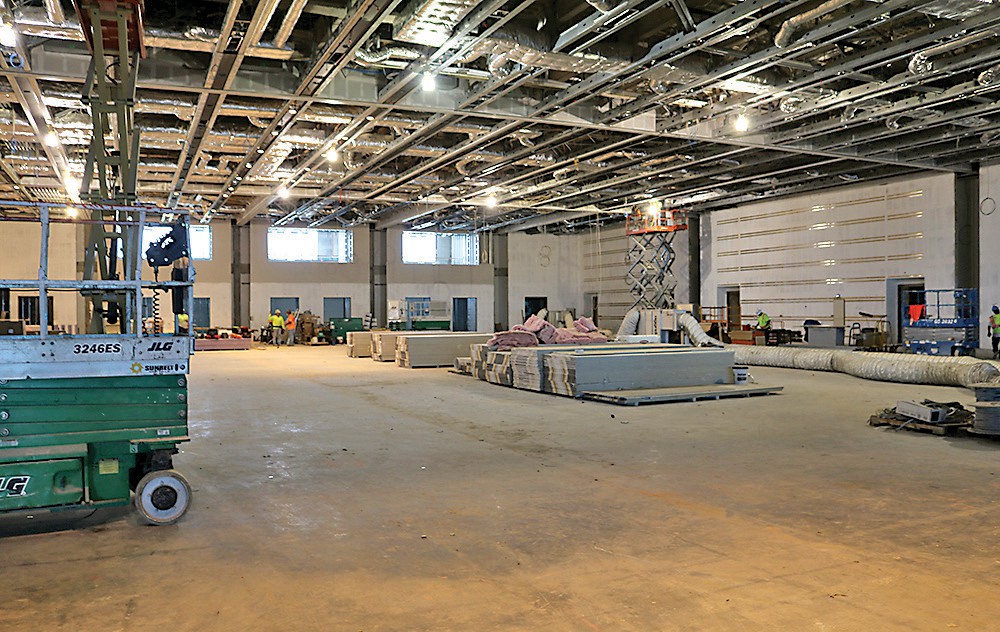 The Calusa Ballroom and Conference Hall is an impressive 30,000 square feet.

square foot arcade area for families, a virtual golf offering and a six-lane bowling alley to provide entertainment for guests of all ages and interests.

Above those newly created meeting and function areas is an adult only tower which will provide 94 new rooms which will cater to a 21 year or older clientele who wish to enjoy a quieter atmosphere during their stay. A pool, spa, restaurant and lounge area will also be available to them when completed to provide a very special experience for those guests.