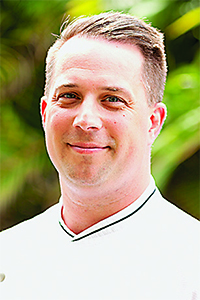 The JW Marriott Marco Island Beach Resort recently announced the appointment of Eric Vasta as the location’s new executive chef. The appointment comes in the midst of the resort’s expansive $320 million renovations. As executive chef, Eric will oversee all culinary operations for the JW Marriott Marco Island. In his new position Eric will also be responsible for organizing and curating menus for the resort’s forthcoming rooftop restaurant.

“Chef Eric was selected for this role based on his world-class experience and deep knowledge of the JW Marriott brand,” said Charles Albanos, Director of Food & Beverage, JW Marriott Marco Island. “He brings with him a bold approach to luxury dining for groups anywhere from two to 2,500 guests, making him the perfect fit for our property. We are excited to watch him lead our resort to continued culinary success.”

Originally from New Jersey, Eric says he grew up in the kitchen cooking with his aunt and mother. Food, he explained, is something that has always come naturally to him.

“I knew at a very young age that I liked to cook, and I’m talking like 6-7,” said Eric Vasta. “It was just something that came easy to me.”

At 19 years old, after a few years of working in kitchens, Eric decided to pursue his love for the culinary arts and enrolled himself in the New York Restaurant School, taking night classes. After graduating, Eric began working for high-end restaurants throughout New York City. Eventually Eric shifted his focus from restaurants to hospitality and began pursuing a career in the hotel industry. In 2004 Eric joined the New York Palace Hotel and in 2006 he held a position at the Four Seasons Hotel in Chicago. In 2008 Eric played a role in the re-opening team of the famous Fontainebleau Hotel in Miami.

In his most recent endeavor, Eric held the title of Executive Chef at the JW Marriott Marquis Dubai, the world’s tallest hotel. There he oversaw 14 restaurants, ranging in style and fare. During his time in Dubai, Eric was awarded the Culinary of Excellence Africa and Middle East Executive Chef of the Year award from Marriott International.

Eric says he finds inspiration from “all different cuisines.” Though French cuisine, and his Italian roots, seem to have influenced him the most.

“Throughout my career I would say French cuisine has played a huge part because I worked with mostly French chefs in the beginning of my career,” said Eric Vasta. “However, I was raised New Jersey Italian so I can always fall back on the good old mama’s sauce and pasta and meatballs.”

In terms of future goals in his new position at the JW Marriott Marco Island, Eric envisions developing a team that can grow through the JW property.

“We’re kind of like a culinary college here,” said Eric in regards to the resort. “I have so many restaurants and different cuisines, I can take people and really grow them from all the different experiences I can offer them, into becoming a really great chef.”