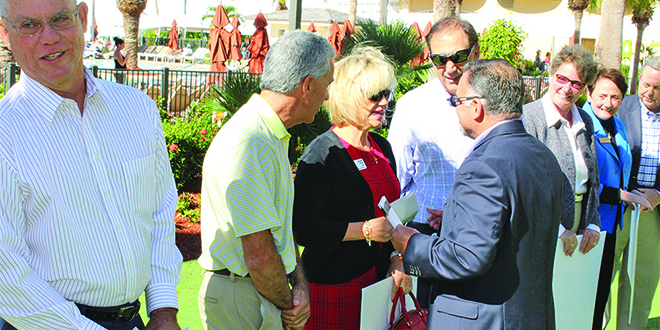 The resort’s new designation as the JW Marriott Marco Island, the Marriott brand’s first beachfront resort in the continental United States, took effect Jan. 1. An update on the $320 million renovation and expansion project that enabled the conversion was presented at a recent press conference at the facility.

“This is a monumental moment for us and being part of that brand is spectacular,” said the resort’s general manager, Rick Medwedeff.

Work began about 18 months ago on the three-phase project which, when finished in October, will result in a facility with:

Phases One and Two are now complete and 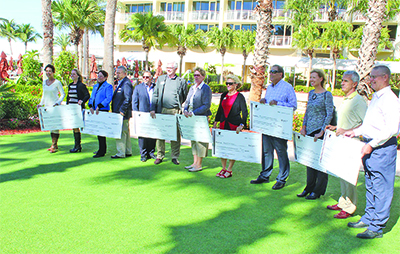 Representatives of the organizationsreceiving donations from the JW MarriottMarco Island and their “big checks.”

at the press conference, it was revealed that one segment of the final phase, the opening of three floors of meeting space in the new tower, will occur in May. The second and last segment: guest rooms, restaurant, bar and pool in what is known as the Lanai Tower, will be open in late October.

“We believe this is going to be an incremental economic driver for this community and we believe that that’s going to be spectacular for everybody,” Medwedeff said of the step up in luxury and service represented by the JW Marriott brand.

“We feel that this is going to be something that will elevate the island as a whole. As the JW Marriott Marco Island, we want to define and establish what luxury is on this island and we believe that we will. We believe that because of that, this island will attract a new demographic of traveler that has the disposable income to activate all the things that are spectacular about this island; shops, entertainment, restaurants and real estate.”

Medwedeff said some large-group meeting planners only consider luxury tier facilities, so they won’t contact Marriotts, which are an upscale brand, but will approach JW Marriotts. Their client 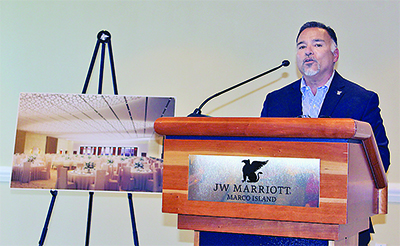 Submitted Photos:Rick Medwedeff addresses attendees at the press conference on progress of the resort’s renovation and expansion project.

could be medical or legal associations, insurance companies, financial institutions or other groups of that ilk.

“These are the sort of organizations that truly look for that luxury tier experience for their meetings,” he added.

The resort is poised to become one of the region’s most coveted culinary destinations, led by Executive Chef Eric Vasta, who most recently held the post at the celebrated 5-star JW Marriott Marquis Dubai.  Culinary programming will include private sommelier-led wine tastings and Chef’s Table experiences at signature restaurant Ario, helmed by Chef de Cuisine Gerald Sombright. The culinary offerings extend beachside with fish-grilling classes, rum tastings and private dinners along the shoreline.

Another exciting addition is the Spa by JW, the JW Marriott brand’s exclusive global spa concept, with treatments based on four core benefit states: calm, indulge, renew and invigorate.  Guests can customize their spa experience, choosing from a variety of menu options from full-service treatments to express spa services that start at a 12-minute entry point and are bookable without an appointment.  Additional spa programming includes daily beach yoga and weekly spa events. 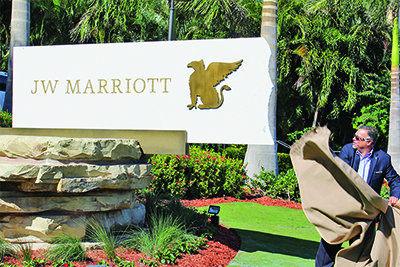 to bring this level of luxury and bring in an entirely new to group of tourists and visitors that will discover this beautiful island, and perhaps be willing to move here,” said Honig. “And I hope it signals to the entire island that we’re moving upscale and developing more amenities for our citizens and better experiences for everyone.”

Prior to the press conference, Medwedeff presented checks to 12 Marco nonprofits for donations to them from the resort.

“The overall support by the Marriott throughout the years has been unsurpassed by any other organization,” said Jane Watt, the charter school’s chairman of the board. “Their support for education and also Marco Island Academy has had a significant impact on the success of our school.”