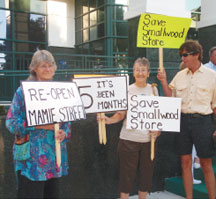 The court case requesting access to the Smallwood Store in Chokoloskee resumed on September 15, following the first hearing on September 8. Early in the morning, a large crowd of supporters for the Smallwood Store gathered in front of the Collier County Courthouse. Many came from the east coast of Florida where they said the closure of Mamie Street was highlighted in the media. They were astonished that a developer could rip up the only access road to the historic Smallwood Museum. Also participating in the rally were musicians Valerie Wisecracker, JRoberts and Tom Porter (of Goodland) who entertained the crowd while waiting for the hearing to begin. 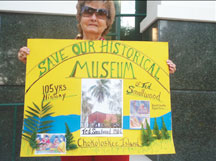 his recollection of meeting with the developers prior to the removal of Mamie Street. Attorney Steven Williams represented Collier County who had filed the lawsuit jointly with the Smallwood Store.

Defending the developer, FL-Georgia Grove, LLP, was Attorney Steven J. Chase of Sarasota. The first witness for the defense was managing partner Gary Blackman who stated that their company had several ideas for the property but initially wanted to improve the boat basin. He also testified that an alternative road through Calusa Drive and the wetlands area was an option. Attorney Steve Chase showed a video of Mr. Blackman driving down that route, trying to illustrate that it could easily be made into a passable road for tourists.

Another witness for the defense was Collier County Code Enforcement Supervisor Kitchell Snow who stated he had responded to a complaint on April 14 and visited the Mamie Street site, talking with general contractor, Greg Griffin, who said he had the proper permits to take out Mamie Street. Former Highlands 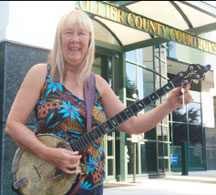 County engineer, Carl Cool, testified that he is a partner with FL-Georgia Grove, LLP, and that he participated in the initial discussions with Collier County employee Mark Burtchin about Mamie Street on September 2, 2010.

After a very long day of testimonies and closing remarks, Judge Hugh D. Hayes stated his reasons for granting the temporary injunction. He said that he agreed with the plaintiffs and that the situation in Chokoloskee is unique. It is undisputed that Mamie Street was the public access road to the Smallwood Post Office for many years in the 1900s. He also noted that the Smallwood Store is on the National Register of Historic Places and that the alternative of driving down Calusa Drive and the wetlands was not practical or reasonable. Judge Hayes ordered FL-Georgia Grove to rebuild Mamie Street within 30 days to allow public access to the Smallwood Store and Museum.

Patricia Huff has lived in Everglades City for the past 16 years and is the Publisher of the local newspaper The Mullet Rapper.