Just a three hour cruise away… 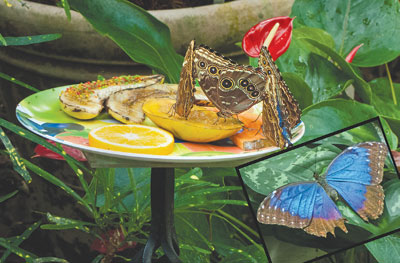 We have been to Key West before and we have also taken the Key West Express passenger ferry before; it was my birthday and we thought it would be fun to go to Key West for lunch! It was fun but we both agreed that we should have made plans to stay over for a few days. Recently, we at last got around to following through on those plans.

The Key West Express operates out of both Ft. Myers and Marco (seasonally) and its fleet is comprised of 3 high speed catamarans. All are air conditioned, have 3 decks with a top sun deck, comfortable seats, big screen TVs, and a snack bar that serves cocktails. It takes about 3 to 3 1/2 hours from Marco, depending on the weather. When we took it on that birthday trip, there were high seas. In order to provide a smoother experience, the captain took an outer route which added an hour to the trip.

Luggage is limited to carry on size although oversize bags can be accommodated for a fee. We have become experienced travelers and limiting ourselves to just carry on is not a problem as we have spent entire weeks in various locations including New York City in the winter with just carry on.

The ferry lands at the City Bight Ferry Terminal in the Historic Seaport. There are taxis and pedicabs at the Terminal, but downtown is just a short stroll away. Bike and electric car rentals are available, but one can reach most sights easily on foot. From the Westin Resort and Marina, there is a boat to adjacent Sunset Key with its spa and restaurant. 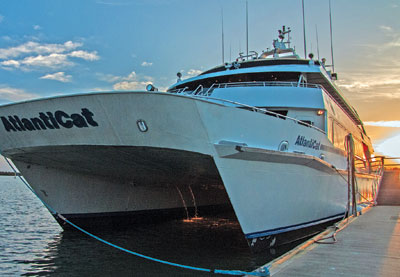 The ferry’s early start from Marco Island brings visitors to Key West in time for lunch. PHOTOS BY Vickie Kelber

Tour Train. Tickets for the Conch Tour Train can be purchased on the ferry with a train meeting ticketed passengers immediately upon exit from the ferry. There is also a nightly walking Ghost Tour.

Key West is the southernmost point in the contiguous 48 states, and there is a buoy to acknowledge that status. The buoy is actually not at the southern most point of Key West, but it does provide for a good tourist photo! History and nature abound at sites such as the Hemingway House, the Truman Little White House, Civil War era Fort Zachary Taylor Historic State Park, the Audubon House, Flagler Historium, Robert Frost Cottage, boat trips to Dry Tortugas, an aquarium, light house museum, shipwreck museum, Mel Fishers Maritime Treasure Museum, a new Eco Discovery Center, and even an interesting cemetery. Lamppost banners throughout the city provide historical tidbits such as the fact that in 1900 the population of Key West was 20,000 while the population of Miami was 500.

A new stop for us on this most recent trip was a visit to the Key West Art and Historical Society Custom House Museum. It is housed in an impressive four story red brick building that dates to 1891. Originally home to the customs office, post office, and courts, it later served as headquarters of the US Navy Caribbean and Gulf of Mexico operations. Charging a very reasonable fee, it features some local artists in rotating exhibitions as well as historical artifacts from Hemingway, the sinking of the USS Maine, and the building (as well as demise) of the Flagler railroad to Key West.

Restaurants are plentiful in Key West and many feature the famous local pink shrimp. There are key lime pie, ice cream, and gelato shops 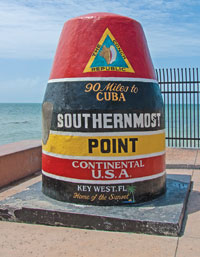 Although technically not located at the southernmost point of Key West, this buoyprovides a colorful photographic opportunity.

and for those nostalgic for the Jersey Shore, Kohr’s Frozen Custard. Bar hopping is an art form here; the most famous ones include Hog’s Breath Saloon (because hog’s breath is better than no breath), Sloppy Joe’s, and Captain Tony’s Saloon (the original location of Sloppy Joe’s in Hemingway’s day). As a point of reference for anyone so interested, the earliest happy hour is 7 AM (yes, AM) at the Schooner Wharf Bar, a local favorite. Oh, yes, Jimmy Buffet’s Margaritaville is located on Duval St. and he still has a local recording studio on the waterfront.

In addition to the bar culture, there is local performing arts and a triplex movie theater, complete with a statue of Marilyn Monroe in her iconic pose from The Seven Year Itch. Art galleries are scattered throughout this compact city and for the sports enthusiasts there is charter fishing as well as snorkeling, diving and kayaking. Glass bottom boats and sunset sails round out the sea going activities.

That Key West has become a popular cruise port is very apparent. Fast Buck Freddy’s is gone and many of the tee shirt and other small shops have been replaced by the likes of Coach, Chico’s, Banana Republic and there is even a Little Switzerland.

At one time, roosters were a quirky attraction in Key West. Some years ago, I remember reading a restaurant commentary that noted the charm of an occasional rooster 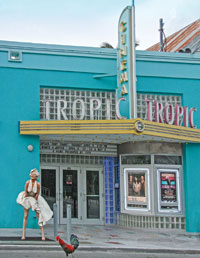 One of the many feral roosters in Key West strolls past the local movie theater with itsiconic statue of Marilyn Monroe.

wandering through the outside garden. Like many things that start out unique (surely at one point there was just the first tee shirt store) they have become ubiquitous. The feral chickens, now protected by law, are all over, even roaming up and down Duval St. and among the gulls on the beach. They are the official Key West alarm clock. Fortunately, the hum of the air conditioner in our room partially muted their early morning calls. The Key West Wildlife Center has an agreement with the city to provide rescue, rehabilitation, and adoption services for these “gypsies”. Some of them have even been relocated to a ranch in Ft. Myers.

Take a trip to Key West for one of their events; there are many including fishing tournaments and championships, Conch Republic Festival, Hemingway Days, Fantasy Fest, crafts shows, art and music festivals, literary seminars, annual House Tours and even a women’s flag football championship.

Or just do what we did and relax, appreciative of being away from daily chores and obligations. Accommodation options are numerous with resorts, hotels, motels and B & B’s. Although we typically are not fond of B & B’s, we did choose one that was fairly close to the ferry terminal and very close to the main attractions. The old Town Manor was a good choice for us with a charming room that had 2 balconies, private entrance, and an impressive casual breakfast with, among other things, croissants and pastries from a local French Bakery served in a breezy courtyard.

The Key West Express operates year round from Ft. Myers and seasonally, usually December through April, from Marco Island. Check the website (www.seakeywest.com) or call for further information about the schedule. The air conditioning works well on these vessels; remember to bring a light wrap.