Jupiter Rises in the East Comet 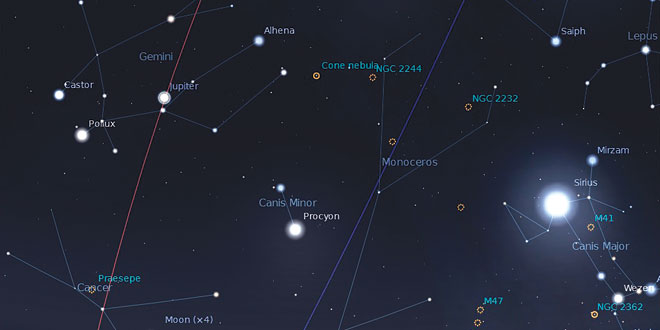 Comet ISON was totally roasted on Thanksgiving day during its suicide dive into the close proximity of the Sun. Apparently nothing is left of the comet except perhaps a few rocks. At less than one solar diameter distance, the comet failed to endure temperatures hot enough to melt iron. Needless to say, my careful instructions on how to view the comet during December turned out to be useless.

In the form of a consolation prize, we now have Jupiter visible again during the early evening hours this winter. It can not be missed in the eastern sky tonight as Jupiter is far brighter than any star in the sky. Only the Moon and Venus are brighter. There is no mistaking the Moon, and Venus is clear over on the other side of the sky.

Check out Jupiter in your trusty binoculars, and you can catch the eternal dance of it’s four giant satellites — each as large or larger than our own Moon. Distance shrinks them down to pinpoints of course, but they are still easy to spot with binoculars. The real trick is holding the binoculars steady enough to get a good look. Try propping your arms on a car rooftop; there are also little attachments you can buy to mount binoculars to a camera tripod. At the time given in the caption, Callisto is just above Jupiter. Io is above Jupiter also, but may be too close to the body of the planet to be easily seen. Ganymede is directly between Jupiter and us, and is invisible in the glare of the planet. Under certain circumstances, a powerful amateur telescope can spot its shadow at such times. Europa is below Jupiter.

Naked eye observers will be drawn to the mighty constellation of Orion. The striking pattern of a bright rectangle of stars together with the three belt stars is visible over the entire inhabited surface of the Earth. Mostly invisible to the naked eye is the enormous gas cloud that these stars formed from. In one small area, though, there is a fuzzy spot easily visible even in suburban Marco. This is known as the Great Nebula in Orion, and is one of just two star-forming regions in our galaxy that can be seen with the naked eye. The other is in the far southern constellation of Carina.