Jupiter Near the Zenith 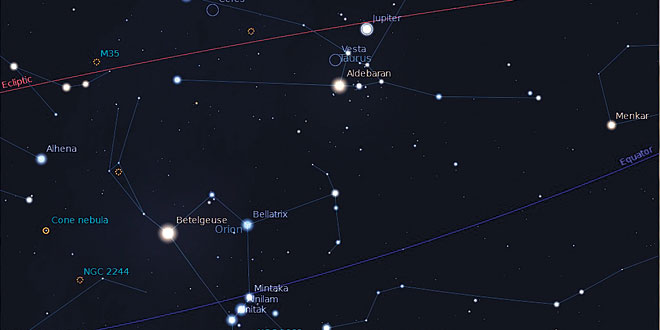 Tonight, Jupiter is very near the zenith (straight up); this is the best time to observe Jupiter with your binoculars. To be comfortable lie down in a pool chair, you can brace your elbows on the chair arms or chest to steady the binoculars. Through the binoculars you will be able to see the tiny disk of the planet itself and all four of the Galilean satellites. Io is by itself on the left side of the planet and on the right are Europa, Ganymede and Callisto moving outwards. The satellites are easy to distinguish from stars as they are usually in a straight line and of similar brightness. Please note that unless you observe Jupiter at the same date and time indicated in the caption, the number, positions and order of the moons will vary – they move after all!

Galileo had the clever idea of using the moons of Jupiter as a very accurate clock; such a clock would be incredibly valuable to the sailing ships of the day as an aid to navigation. This would work in theory but the calculations involved were utterly impractical by 17th century standards. He quickly realized this and dropped the idea.

Look again at Jupiter on the 21st; the Moon makes an extremely close pass by the planet that evening. In fact, the Moon will not come so close again until 2026! At the time of closest approach the two will be less than one degree 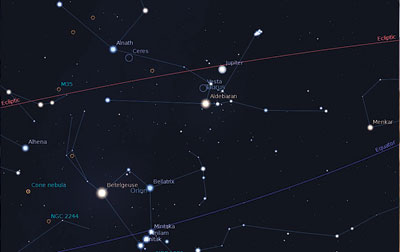 apart. Occasionally the Moon will actually cover Jupiter, an event known as an occultation; but, alas, there will no occultation in the near future.

As long as you have the binoculars out take a look at the nearby Pleiades; six stars are visible to the naked eye – how many can you see with the binoculars? There are actually two star clusters visible to the eye in Taurus. The second one, the Hyades, is a little more spread out than the Pleiades and form the “v” shape of Taurus’ head. Aldebaran is also part of the “v” but not part of the Hyades cluster being only about half the distance away.

Two bright asteroids, or what passes for bright in asteroids, are also in Taurus tonight: Vesta and Ceres. Both are just below naked eye brightness, but are easy to see in binoculars. Vesta will be quite difficult to positively identify as it is buried in the Hyades cluster lost among similarly bright stars, but Ceres should be fairly easy. In your binocular field of view just to the right of Alnath and just under the “line” of the horns of Taurus are 3 stars of similar brightness. Ceres is the middle one. These directions are only valid for the week on either side of the 18th of January; as in the case of Jupiter’s moons – Ceres moves! See you next time!