Junkyard of the Solar System 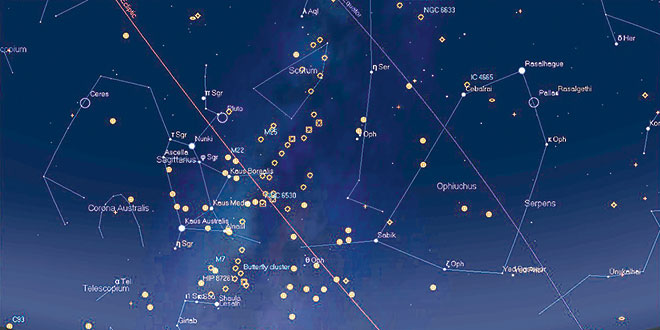 Looking Southwest 11:00PM September 18th, Take a good look at the summer Milky Way before it sets in the fall. SUBMITTED PHOTO

Asteroids, until recently, were the Rodney Dangerfields of our Solar System – “they just get no respect!” In the last couple of decades though, both scientists and business tycoons have been taking notice of these oversized rocks, and it looks like asteroids are important after all.

Most asteroids, and there are millions of them, inhabit the aptly named Asteroid Belt lying between the orbits of Mars and Jupiter. Even though asteroids are so numerous if you happened to be actually standing on one it would be rare for you to see another one with your naked eye – forget about that nonsense you see at the movies, they call it “space” for a reason!

A few asteroids get deflected by Jupiter’s gravity or other processes and get thrown into the inner solar system, where large ones can pose a danger to Earth at very rare intervals. An asteroid is thought to have caused the extinction of the dinosaurs, for example. Most asteroids are quite small however, and pose no unusual threats.

Recently, asteroids have become appreciated for their great economic potential. A mile-wide asteroid (and there are about a million of those) has been calculated to contain ten trillion dollars worth of gold, platinum, tungsten, iridium and other valuable materials. Not a million, or a billion but a trillion! Already a couple of companies are taking steps toward selecting potential asteroids for future prospecting missions. Clearly transportation costs are going to be very high, but so are the profits.

Generally, asteroids are too small and faint to see with the naked eye, but there are a dozen or so bright enough to see with binoculars, albeit only as tiny dots. Tonight there are two of the larger ones on the chart, Ceres and Pallas. Ceres is pretty easy, but Pallas is going to require at least a 9×50.

Pluto has been getting all the press recently, but the Dawn probe has been orbiting Ceres for six months now and has been sending back spectacular photos. In particular, an object called the lonely mountain and two mysterious white spots have been getting a lot of attention. Logically the white spots could be water ice, but surface ice is unstable inside the orbit of Jupiter. (Our atmospheric pressure stabilizes Earth’s ice, but there is no air on Ceres.) Another suggestion is that white spots are salt. If they do turn out to be water it means the ice must be continuously replenished, and that can only mean volcanoes, or possibly geysers, erupting liquid water which then freezes.