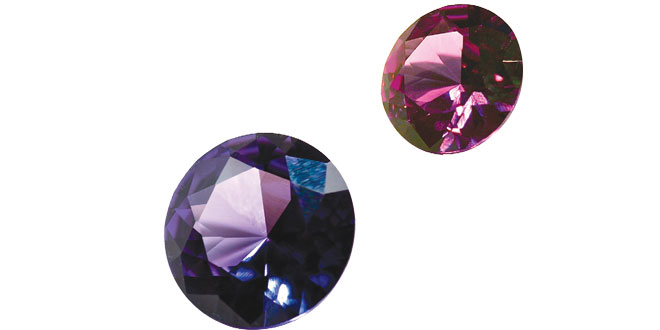 No, I haven’t lost my mind just yet, and there is no such gemstone as an Alexmoonpearl. But in fact, June is one of the few months that actually has more than one designated gemstone to signify the “birthstone” for that month.

The origins for birthstones go back thousands of years. Bible scriptures describe twelve gemstones set into the breastplate of the high priest, Aaron, signifying the twelve tribes of Israel. Due to translation problems with the ancient text it is difficult to identify what exactly the twelve original precious stones were.

For my money, I would guess that the moonstone was the first birthstone for the month of June. Finding a pearl while riding a camel in the desert seems unlikely.

In the 5th century, St. Jerome mentioned a connection between the twelve gemstones (or tribes) and symbols of the zodiac. I find that theory confusing because if you go by the zodiac symbols and its corresponding gems and you were born after the 21st of June your birthstone would be a ruby which is the birthstone for July. Huh?

So back in 1912 The National Association of Jewelers (U.S.A.) implemented a “modern list” of birthstones that are pretty much in effect today. Only recently the gemstone tanzanite was added to the month of December, in addition to lapis lazuli, turquoise and hardly used genuine blue zircon.

Apparently religion or “what’s your sign, babe?” has nothing to do with designating a birthstone nowadays. It’s just a matter of the jewelry industry selling a larger selection of gemstones. Don’t like the color of your birthstone? Choose another!

I admit the original March birthstone, the bloodstone (An opaque non faceted dark green onyx like stone with what appears to be drops of blood in the grain of the gem) is pretty ugly for a lady. It has been replaced with the more popular substitute gemstone, Aquamarine.

Back to the birthstones for the month of June. Moonstone is an intriguing semiprecious gemstone that appears much like a crystal ball with a cat’s eye like feature that follows the beholder around the room. It is usually cut in the cabochon style (domed top and a flat bottom with no faceting). It also comes in different colors and shades. While not an expensive gem in small one or two carat sizes, they can be very expensive in 10 carat and above sizes. Most can be found in India and Sri Lanka. Legends say that the moonstone brings good luck and many believed you could see the future if you held a moonstone in your mouth during a full moon. Hmm? Tomorrow’s lottery numbers, Yeah, I see the future… an ambulance rushing me to the emergency room to remove a twelve carat moonstone from my windpipe!

The pearl, while known to all is another option for the June babies out there, forever popular for centuries. Certain cultures refrain from possessing the gem if not the wearer’s birthstone for it will bring misery and tears. Foolish superstition? Many Italians believe giving a bride to be a gift of pearls will condemn the marriage. I think it’s nonsense. Wait a minute, my first and second wives wore pearls on our wedding day.

Last but not least, the alexandrite while only discovered in Russia in 1831 during the reign of Czar Alexander II, is the least known gemstone. First of all, it is one of the most expensive. It can easily surpass the cost of a fine diamond equal in size and weight and is rarely found in large quantities and sizes. Fine Alexandrite in five carat and above sizes can fetch upwards of $40,000 per carat. The fascinating quality of fine Alexandrite is its’ ability to color change from red to green, depending on light source or if it is day or night. In my forty plus years in this business I have seen less than a dozen small genuine stones. Most large sizes that are set in jewelry are imitation or synthetic (manmade), especially jewelry from the late 1950’s. The rare gem can be found in such countries as Brazil, East Africa, and Sri Lanka. Unquestionably the ultra-rare Russian Ural Mountain found gems are the most coveted, beautiful and most expensive.

Birthstone jewelry was popular in the 1940’s through 1960’s. No “Sweet 16” birthday party was complete without the parents or grandparents presenting the June birthday girl with a pearl birthstone ring, something that is rarely done today. Yes, times have changed, in my opinion for the wors. I witness the birthday girls of yesteryear selling their sweet sixteen birthstone mementos for scrap gold. It’s a sad thing when yet another American tradition fades away.

Questions and answers in cyberspace… Why does my silver jewelry tarnish so quickly? My first question is do you live on the island? Being surrounded by salt water and salt air is the first problem. The second could be the quality of the sterling silver. The pureness of the silver is a big factor, inexpensive Mexican silver jewelry can have more alloys than actual silver (Alloys are metals that cut the purity of the silver such as nickel or copper, even tin)! The high concentration of alloys will surely cause the low quality “silver” to discolor and turn black quickly. Good quality sterling silver is at least 925% pure silver. Nowadays a lot of sterling silver is created with new, cleaner alloys that prevent tarnishing or the pieces are in fact plated with platinum or palladium to prevent it from tarnishing at all.

I suggest after wearing, wipe body oils or suntan lotions from your silver jewelry with a good quality jewelry cloth and if you are near the ocean, keep the jewelry in a zip lock bag with an anti-tarnishing strip enclosed and that should help. Anti – tarnishing strips and treated bags are made by 3M company and can be purchased or ordered at some jewelry stores.