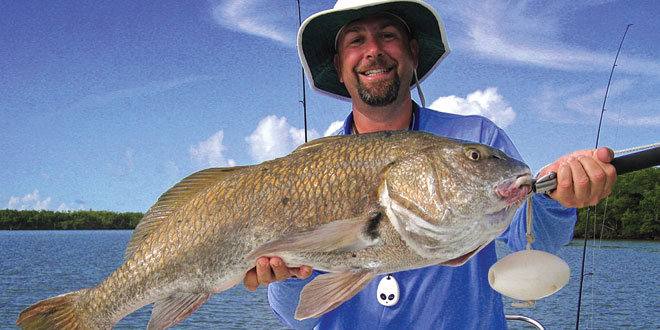 Here in the Ten Thousand Islands, the weather in July is fairly predictable, as are the fishing patterns. Daily storms are now arriving late in the morning to early afternoon and cool things off a little. The bite is early in the day, and again late in the afternoon/early evening. Expect the bite to drop off to nothing during mid day heat and slack tides.

Day time air temperatures are now hovering around 92 degrees each day, bringing the water temperatures up to 87 degrees. Anglers can get into some nice Snook on the outside islands most every trip. Top water plugs and suspended soft plastic artificials will produce some nice morning action 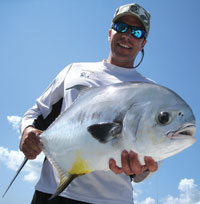 Jeff Zellers and a nice Permit.

before the wind starts to blow. Of course nothing beats a livewell full of Pilchards and Thread Herring. You can live chum with a handful of these guys, then follow up with a nice one on your hook. The big Snook are here and they are feeding! Just remember that they are catch and release only.

The Trout bite will remain steady. They are generally smaller than the winter Trout, but around in good numbers. They will take anything from a live shrimp, to a buck tail jig, to a topwater plug. Fish early on the incoming tide for your best results. You can count on the Redfish to take a Gulp shrimp on the last half 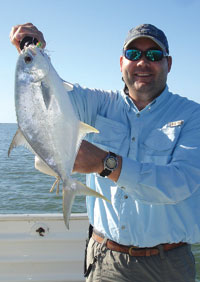 of the incoming. Live shrimp under a popping cork works great for Reds too!

Triple Tail are hanging around markers and structure and will happily take a live shrimp on a circle hook. Permit and Cobia are hanging around offshore structure. Bring some small silver dollar sized crabs with you for the Permit. Cast net some nice 6” mullet to present to the Cobia.

Mangrove Snapper are larger in size than most of the year and are hungry for a live shrimp around the Mangrove roots. Shark are all over the place and love Ladyfish. Tarpon remain solid early in the morning and in the evening and are looking for live Ladyfish and Mullet. Be sure to use a heavy wire leader!