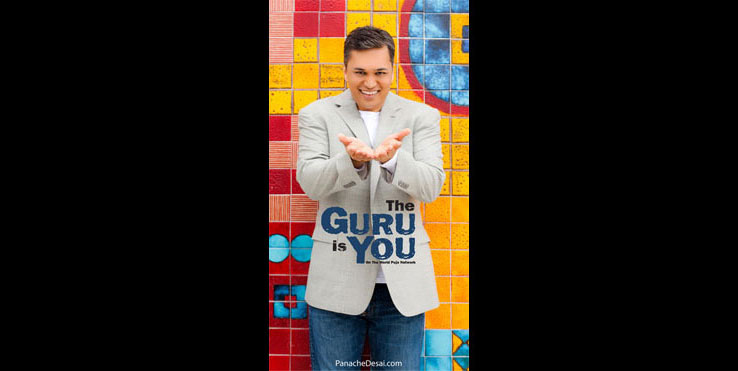 Beginning September 7, 2011, contemporary spiritual teacher Panache Desai will broadcast “The Guru is You” radio show via the internet on the World Puja Network to a listening audience of over 900,000 people.

“The Guru is You” is a radio show featuring Panache Desai and is presently being recorded and engineered by well known entertainer JRobert Houghtaling at Mangrove Music Studio on Marco Island, Florida.

“Recording and composing music for Panache is totally inspiring,” says JRobert.  “He channels his message spontaneously, and I simply strive to capture his intensity and creative essence.”? ?Panache Desai is an inspirational visionary whose gift of spiritual awakening and vibrational transformation has drawn thousands of people from all over the world.

Born and raised in London, England, Panache Desai spent his childhood surrounded by a deeply spiritual family, immersed in an atmosphere of prayer and worship.

Panache’s work crosses all cultural, ideological, generational, and economic boundaries. Not aligned with any religious or spiritual tradition, he is featured regularly in print, online, and broadcast media. Panache is on the faculty of Omega Institute, Blue Spirit Costa Rica and the Kripalu Center for Yoga and Health, has produced multiple CDs, including Awaken Your Unique Soul Signature, Experience Connection, Awakening, and Conversation For Change: Essential Practices for Inspired Living, and the DVDs Live Beyond the Edge and Separation Ends and Mastery Begins.