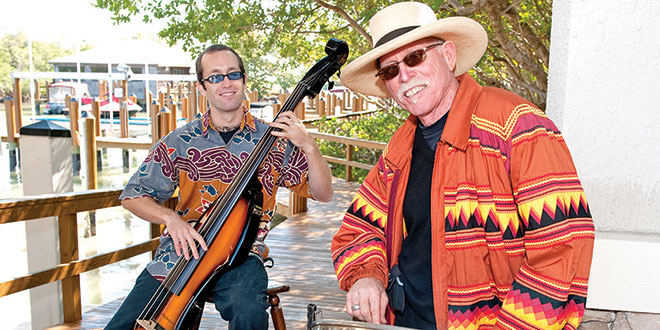 JRobert and Martin play for the Florida Conservancy. Submitted Photos

Marco troubadour JRobert is taking audiences on a journey to Old Florida through song and spoken word with his new production, “The Florida Fiddler Show.”

The longtime Marco Island musician, composer, songwriter and producer will perform what he describes as “a musical monologue,” on September 10 at The Marco Island Players, located in Marco Town Center.

“Ever since I first started playing as a hobby, I’ve collected fiddle tunes and folk tunes, and I’ve kind of combined them into a show with Florida history and some of my own family history,” said the multi- instrumentalist and fourth generation Floridian. “I’m calling this show a musical monologue of fiddling and frolic, Florida heritage and hope.”

JRobert uses the story of the mystical “Florida Fiddler” as the vehicle for the musical journey, which unfolds through such iconic songs as “Orange Blossom Special,” “Suwanee River” and “Turkey in the Straw

– Arkansas Traveler.” He said the state’s musical palate was heavily influenced by the folk music of the Scots-Irish who mi- grated from Georgia and North Carolina, as well as the blues and other music created by Florida’s black population.

The show also includes more modern selections that are identified with the Sun- shine State, such as “Margaritaville,” “Hot Hot Hot” and “Rhythm is Gonna Get You,” along with a few JRobert originals.

The music will be interspersed with JRobert’s musings on the state’s history and evolution, as well as his family history, including tales he heard while growing up from a grandfather who farmed in the Everglades.

“It’s one player, one voice, one story and the audience, the most important part is the audience,” he said. “It’s my imagination as a writer opening up the imagination of the audience and taking people back to the time before music was everywhere. There was a time people 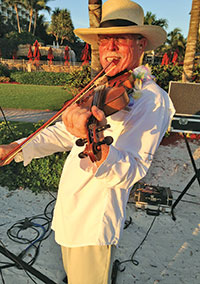 spent their days, their weeks, their whole lives without mu- sic, unless they went into town or they were rich.”

JRobert’s life’s journey has taken him from the Everglades, where he spent part of his childhood on his family’s farm, before his father transplanted the family to Tampa to attend college. The family eventually found itself moving around the country due to J.E. “Dooley” Houghtaling’s career designing nuclear reactors.
As a young adult, JRobert spent many years based in the Northwest, playing with a touring band. Over the years, he’s played with or opened for such headliners as John McEuen of the Nitty Gritty Dirt Band, Charlie Daniels, Bonnie Raitt and Jimmy Buffett.

He returned to Florida to be near fam- ily, living in Ruskin and working in his father’s orange groves, before moving to Marco in 1986.

“I came in for a weekend to play at Quinn’s (On the Beach) and here we are 30 years later,” said JRobert.

The show’s origins lie in his many shows with McEuen, who would favor audiences with stories about his experiences with the Nitty Gritty Dirt Band, as well as JRobert’s “years of thinking about having a pocket to put all my songs and stories in.”

And there was an additional source of inspiration.

“The   Marco   Island   arts   community has really inspired me to create something that’s meaningful to me and to the community,” said JRobert. “It’s something I can really, truly share and it’s a unique perspective.”

Cost: $20 for adults and $10 for students, exact cash or check at door. Tickets avail- able at the door the night of the show.