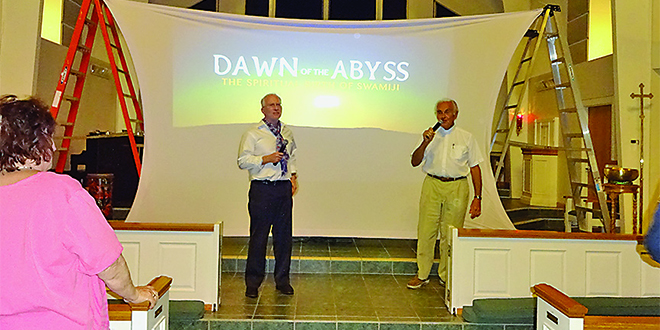 St. Mark’s Episcopal Church, in co-sponsorship with Mindfulness Meditation on Marco, hosted a Director’s Screening of the film, “Dawn of the Abyss: the Spiritual Birth of Swamiji,” on Friday, February 24. The film follows the journey of a Christian monk as he seeks to fulfill his spiritual destiny in the land of India. This film contained remarkable footage and moving music, the audience was taken on a sensual ride into the twists and turns of this
spiritual quest.

In attendance of the screening was the film’s writer and director, Fabrice Blee. Blee is a professor of Theology at St. Paul’s University, Ottawa, Ontario in Canada. He specializes in inter-religious study and is an expert in the life of Henri Le Saux. He has traveled to Florida for the first time and commented that it’s a pleasant change of weather versus the winter back home. With his extensive knowledge in various religious culture, his purpose of the film was to highlight spiritual awakening.

The film is inspired by the true-life story of Henri Le Saux, a French Benedictine monk who traveled to southern India in 1948 in search of a more radical form of spiritual life. Upon a powerful mystical encounter with the great Hindu sage, Ramana Maharshi, Le Saux found his Christian faith merging with the people, culture and religious heart of this strange yet fascinating country, leading to his own ultimate rebirth. Le Saux’s prolific writing and deep understanding and appreciation of the indigenization of religious faiths made him one of the 20th c. greatest pioneers of Hindu-Christian dialogue.

After the film ended, there was a 10-minute mediation period, followed by the opportunity to ask Blee questions regarding the film or comments on his work on Henri Le Saux. Blee’s published works include, 60 articles and two books. The dialogue focused on inter-religious concepts. There is much to be learned when exploring new religions that resonate with the yearning for growth. It is progressive churches on Marco Island, such as St. Mark’s that allow for open discussions about different beliefs to exist in an all-encompassing environment.