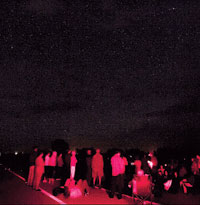 Last year, Luke Gommerman looked up in the night sky over Big Cypress National Preserve and was star struck. The seasonal park ranger thought the southwest Florida night sky resembled the extra-dark night sky he had spent the summer looking at while completing a National Park Service tour at the Grand Canyon. There, Gommerman participated in a number of interpretive astronomical programs focused on star gazing, and he knew he could bring these same programs to Big Cypress.

“Big Cypress has less light pollution than almost any other place in south Florida,” explains Gommerman. “This is something we should put an emphasis on. We spend so much time protecting so many things. The night sky should be one of them.”

So, for the second winter season, Big Cypress National Preserve is hosting monthly star parties through April 2014 at its Welcome Center at 33000 Tamiami Trail East in Ochopee. Park Rangers lead an interpretive presentation discussing the fascinating science and cultural significance of our night sky. Following the presentation, Gommerman and other park rangers offer constellation tours, while representatives from the South Florida Amateur Astronomers Association and the South Florida chapter of the International Dark Sky Association provide tele-scopes to view stars, planets, star clusters, nebulae and galaxies.

Each party has been scheduled to accommodate the moon phases, keeping them on or close to the new moon when the sky is the darkest. The first party was held Dec. 7 in conjunction with the Swamp Heritage Festival. According to Gommerman, some 50 visitors attended. Among them were 15 amateur astronomers who brought their own telescopes.

Big Cypress spokesman Bob DeGross recommends visitors bring chairs and remember to dress for the weather. If weather prevents night sky viewing, the interpretive presentation will be conducted indoors and will not be cancelled. For more information call Big Cypress National Preserve at 239-695-2000 or visit the website at www.nps.gov/bicy.