Johnny Mac Topples Serena in Battle of the Sexes? 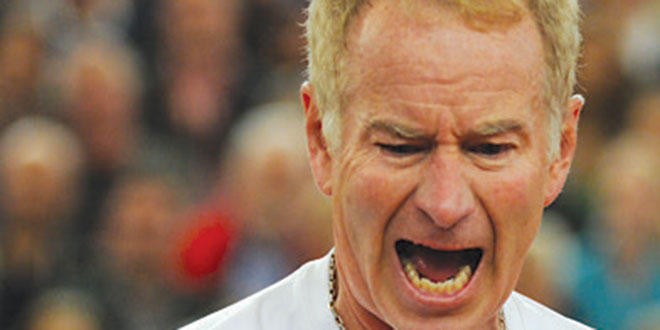 “I believe I can still take her,” John McEnroe proclaimed last week, while appearing on the “Jimmy Kimmel Live!” television show.

Is he delirious or just supremely confident? There are so many factors to consider, so let’s examine this possible match up.

To me, this could be the most incredible battle of the sexes of all time! After all, Serena Williams is attempting to win the calendar Grand Slam – winning all four events in one season: Australian, French, Wimbledon and the U.S. Open.

With Serena already winning the first three ‘Slams,’ she is on top of the sports world. And, she is the clear favorite to win at Flushing Meadow. If all goes to plan, there would be keen interest in the match against McEnroe.

Don’t let the age difference fool you; Johnny Mac is 23 years older, but his game is in supreme condition. He has been a regular on the men’s senior tour, competing all over the world. He continues to be in high demand because his game is still razor sharp, as he often competes against younger foes like Andy Roddick and James Blake.

From my standpoint, McEnroe’s particular on-court style would be a thorn in Serena’s side because he is so versatile; his effective slice backhand will upset Serena’s rhythm and frustrate her from the beginning.

For example, Serena’s first round opponent at this year’s Indian Wells event, Romanian Monica Niculescu, who features an unorthodox forehand slice stroke, had Serena so befuddled that she almost lost.

McEnroe, the four-time U.S. Open men’s singles champion, has so much more game than the Romanian and would be able to play from the baseline and venture into the net to upset Serena’s comfort. Since he regularly practices with many of the finest young stars in New York, he can handle pace. And don’t under estimate the importance of competing against Andy Roddick; McEnroe is accustomed to returning huge serving bombs and chasing down powerful forehand drives.

Even though the elder statesman McEnroe has lost a step or two, he still possesses a strong serve-volley game and is capable of winning quick points. And, if Serena is not hitting a high percentage of first serves, McEnroe will return and come into the net.

Serena fans will point out that she boasts lightning court speed and a powerful and consistent two-handed backhand, and will have the ability to move McEnroe all over the court and wear him 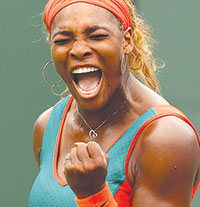 down. Moreover, if she hits at least 60% of her first serves, she will keep McEnroe at bay and scrambling to keep up with her pace. And, if Williams is able to control her nerves, her forehand could be the deciding factor, as she will be able to control the tenor of the match.

Another key point to discuss is that the two combatants have practiced before, and I believe, this is yet another edge for the 56-year-old. Why? Clearly, McEnroe is confident that he is able to handle her pace and style of game, and is looking forward to the possible battle.

I will never forget the first “Battle of the Sexes,” featuring Billie Jean King and Bobby Riggs, when I was a senior in high school. Over 30 thousand fans attended the big match, and it was reported that 90 million fans tuned into the match worldwide! Unfortunately, the match did not live up to the hype, as Billie Jean rolled over Riggs in three straight sets.

Many people have speculated that Riggs threw the match, but King was the big winner on that special night in tennis history.

Ironically, I once played against Bobby Riggs, almost 30 years ago, when I started work my first day at my old club on Marco Island.

“Bobby, what happened in your match against Billie Jean?” I kidded him. With a wry smile he answered, “Oh Billie was just too tough that night, I just couldn’t get it going,” Bobby replied. I quickly knew that he wasn’t going to offer more, and I dropped the subject.

Call me crazy, but I firmly believe that the potential dual between John McEnroe and Serena Williams could be a real shot in the arm for tennis, and would draw interest throughout the world. To add further drama, both players have had their share of on-court controversy, as each has battled with lines people and umpires. Both are polarizing sports figures, and non-tennis players will be curious and tune in the match.

I’m not one for predictions, but I’ve got McEnroe winning convincingly 6-3, 6-2. Sorry Serena.