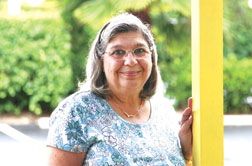 Joan’s experience with cancer inspires her to help others.

“When you have cancer, you can’t feel sorry for yourself!” said Joan Pidherny. She and her family have lived with her cancer since 2006. “I won’t give up, and I pray a lot!”

In 2006, a lump was found in her breast. She was treated for breast cancer including surgery. Two years later in a surprise diagnosis, she was found to have kidney cancer. The kidney was encrusted so Joan had major surgery to remove it. “When they operate, they try very hard not to disturb surrounding tissue. Since then, doctors have now found a small spot on my lung. Right now, fortunately, everything else is pretty much in remission. The doctors have said only come in once a year for CT scans, one for the lung and one for the kidney.”

All of Joan’s cancer has been on the right side of the body. Joan’s lump was uncovered during her annual mammogram exam with Dr. Fueredi. When he informed her she had cancer, he suggested immediate surgery. Joan had a partial mastectomy on the right breast and had several pre-cancerous cells removed on the left, followed by radiation. Her choices in radiation therapy were: one week of massive doses at Massachusetts General, or six weeks of radiation with her local hospital radiologist, who was affiliated with Massachusetts General. “I was scared because the treatment in Massachusetts’ was new technology at the time. We chose to go ahead with six weeks of radiation. I had a wonderful support group that helped me through it.”

Years earlier, Joan worked for a rectory in Long Island doing secretarial work. The office was in the basement of the building with cement block walls. “I lean towards the cause of my cancer being environmental. Within six months of each other, two other workers and I were diagnosed with breast cancer. Another died of pancreatic cancer and a nun who worked there died of stomach cancer in 2006.” It was a Long Island cancer cluster.

“The second time I was diagnosed with cancer, I went to the doctor for what I thought was a bladder infection. He sent me to a urologist who confirmed the cancer following a CT scan. Is it feasible a cancer cell dropped during surgery and spread to my lung? I think so. We postponed surgery until we could get into Brigham and Women’s Hospital. We asked questions of the surgical team and as a Harvard Medical School, a teaching college, several young doctors had the procedure explained to them. The whole kidney and surrounding tissue had to be removed in a six hour operation. They broke ribs to get to the kidney. I was in the hospital for six days followed by eight weeks sleeping on the couch since I couldn’t get upstairs. I looked like Quasimodo, all hunched over. You never fully recover from surgery like that. I am still tired.

Bingham and Women’s Hospital in Boston was wonderful, they partner with Massachusetts General. Dana Farber Cancer Institute is right next door and it is one of the leading hospitals for cancer research. We did a bit of flying back and forth.

In the beginning, you wonder if you’re going to die. People around you react differently. I could not have gone through this without my husband, Dennis. He kept track of all my medications. He was so protective and patient. The hardest part is telling your children, especially the second time! Even my granddaughter said, ‘Grandma, mom says I can give you hugs and kisses, but I can’t sit on your lap and I have to be careful of your body because you have a BIG Booboo’. Friends came every day. Some came with food, others to check up on my recovery. How do you thank everyone? It’s one reason we like to give back.

When I was at the end of the medications, I was filled with anxiety. You get used to being watched over by the doctors and you want to stay under their constant care. Right now I go in once a year for the CT scans. I am a nervous wreck before each test. You pray they won’t find anything and if they do, you pray they found it early.”

Joan’s words of advice: Early detection is important for treating any cancer. “Keep a positive attitude. You can make yourself sick inwardly if you don’t. Do not give up! Don’t waste time feeling sorry for yourself. A good support group is important. I joined a group when I had breast cancer. We help each other with feelings of insecurity and anxiety. We laugh, we cry, we discuss problems.

Recently I had a friend who felt a lump. She had a very fast growing invasive cancer. She went to Bingham and Women’s. Joan was surprised to hear her friend say, ‘You’re so positive, you’re my role model! I want to be like you.’”

Many know Joan and Dennis through the countless hours of volunteer time they give to a variety of organizations such as Kiwanis, American Cancer Society, their church and the Seafood Festival. They’re among the first who offer their assistance. It’s their way of giving back.