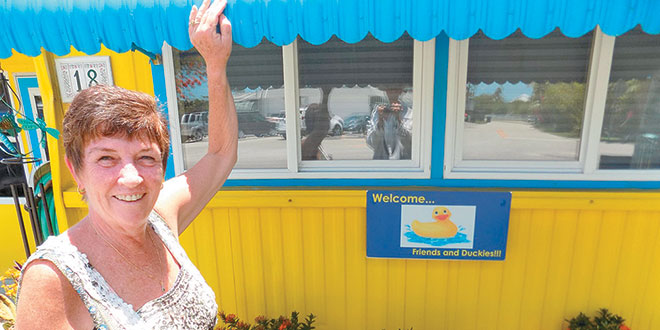 When driving into the Village of Goodland, the first residence you will see is the brightly colored yellow and royal blue mobile home of Jo Bromley. It is occasionally photographed by tourists, and a painting of this residence recently sold for $400. (It is hanging in the Little Bar Restaurant.) This gaily appointed residence was prominently shown in a recent NBC2 newscast concerning Goodland Road. As it turned out, this residence has set the tone for the many bright pastel colors, which have become endemic here in Goodland. It is what’s inside Jo Bromley’s home, however, that really got my attention.

Jo Jenkins grew up in Riverside, New Jersey, located on the Delaware River in the picturesque hill country of northeastern New Jersey. After graduation from high school in 1973, Jo married and moved with her first husband, Steve Walter, to Chester, Vermont, located in the Green Mountains, of southern Vermont. Steve had a forestry degree and got a job in the logging industry. There they had two daughters, Amy and Molly, born in 1977 and 1978 respectively. In 1983, Jo heard of a need for a cheerleading coach at Green Mountain Union High School in Chester. She had lettered in this fast emerging sport in high school. She got the job, and in 1984, her second year, led her squad to the state championship. The marriage with Steve Walter ended in divorce and she subsequently married Bob Bromley. Jo and Bob were both members of the Tater Hill

Jo Bromly’s residence at the end of Goodland Drive gives visitors their first glimpse of colorful Goodland. Painted yellow and blue in 2000, it set off a flurry of repainted residences, which continues today.

Country Club in Chester and frequently played tennis there. Bob Bromley was the director of skiing at the nearby Magic Mountain ski resort. Jo tells me he nearly made the Olympic Ski Team in 1976. Tater Hill must have been impressed with their tennis athleticism and asked them to run the tennis program. Bob and Jo Bromley then became the tennis pros at the club. During the winter they worked as ski instructors. Jo also started her own graphic design business. Mike Higuera was the golf pro at Tater Hill. The Bromleys became close friends with Mike and his wife, Sarah, who, it turned out owned a mobile home at the Drop Anchor Mobile Home Park in Goodland.

In 1998, between seasons, the Higueras invited the Bromleys to stay with them in Goodland. Things were never the same after that. “We both fell in love with Goodland that first year,” Jo recalls, “We couldn’t imagine that a place like this really existed. It was hard going back north after that.” In 1999, on a return visit with the Higueras, the Bromleys looked around for something to serve as a seasonal residence, but found nothing suitable. In 2000, the two couples returned for the third time. “We were shocked to find that the sale prices had doubled [in Drop Anchor],” Jo said, “We knew we had to act fast before they went up even further. We bought our current home in April 2000 for $60,000. It needed a lot of work.” The smaller 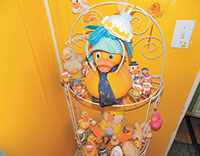 This mama….er papa duckie has plenty of kids – and hats.

size of a mobile home did not deter them, as they only planned to come down seasonally. In July that all changed. “Bob and I decided that we wanted to live in Goodland as permanent residents,” Jo said, “We resigned our jobs, sold everything, packed what was left into a 6×8 U-Haul trailer, and took off with our Golden Retriever for Goodland.” Luckily the residence was furnished.

Jo was not happy with the appearance of her new home. It was painted white, as was every residence in Drop Anchor, she recalls. “Color makes me happy,” Jo says, “We decided to paint it rubber duckie yellow and royal blue. John Hackett painted it for us. Six months later, color started popping up everywhere [in the mobile home park].” Brightly colored pastel colors can now be seen all over Goodland. After painting the bathroom bright yellow, Jo bought a couple rubber duckies to put in it. “Since that time, I have only bought five,” she says, “When word got out, everyone started buying them for me. I now have over 400 of them.” Most are crammed into her bathroom, where they peer over the towel rack, stare up from the toilet seat, and crowd the sink. Signs on her golf cart and on the front of the house proclaim her fondness for the little critters. Bob Bromley is deceased and Jo has been living happily with Mark Payne, Goodland’s mobile auto mechanic, for the past eight years. “Luckily for me, Mark so embraces the 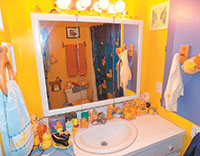 Jo B likes plenty of company and advice when preening or brushing her teeth.

whimsy of all this,” Jo remarks.

Like many others who have come to Goodland, Jo Bromley landed a job as a server at the Little Bar Restaurant, where she worked for three years. The dining room was managed then by Margie Fortune, who gave Jo the nickname – Jo B – which is how we all know her. Next, came a four-year stint as manager of the dining room at Fortune’s Restaurant in Marco Island. (Now closed – no relation to Margie). Next, came the head bartending job at Sasso’s Restaurant, where Jo worked for the next 8 years until the owner passed away in 2014. When Sasso’s reopened as La Tavola, in February 2015, Jo resumed her duties as head bartender, bringing most of her old customers along with her.

So, if you’re lucky enough to run in to Jo B outside (or inside) her colorful home, you will be able to tell from her dazzling smile just how happy she is at the way things have turned out for her – a sentiment shared by most of us who live here. Take a closer look the next time you approach her home at the end of Goodland Road, and you too, may end up smiling. Bring a rubber duck and you may get inside.