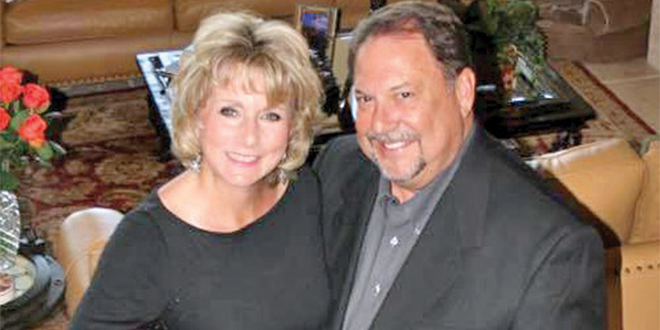 On World Cancer Day, February 4, 2017, the Beach Pavilion at the Marco Island Marriott will be aglow with “Glitz, Glamour & Giving,” the American Cancer Society Imagination Ball. This gala fundraiser will feature fine food, music and both silent and live auctions. Perhaps the most poignant moment of the evening will be the presentation of the Grado Award. Named in honor of the late John Grado and his wife Corrie for their years of service to the American Cancer Society, the award recognizes individuals who have contributed significantly in the fight against cancer. This year’s honorees are Marco Island residents Jim and Allyson Richards.

Jim and Allyson’s story is one of courage, faith and love.

Jim Richards and his first wife, Mary, were high school sweethearts since the age of 14. They married at the age of 18 and raised four sons – James III, Robert, Jason and Joseph. Jim became a successful businessman, moving his family to various places across the United States, including Ohio, Texas, Florida and Georgia. They lived the American dream until Mary was struck with a week-long stomachache. At first thought to be diverticulitis, her condition later received the heartbreaking diagnosis of stage 3 colon cancer that had spread to her lymph nodes. Jim tearfully described the treatments that Mary endured, including chemotherapy, radiation of her soft organ areas, and a colostomy bag. But Jim went on to say, “Mary went through a seven year battle with cancer, but in some ways, those were our best years. We traveled extensively, bought a lake house and a home on Marco Island.” At one point, the couple even believed that the cancer was gone, but unfortunately, the disease returned with a vengeance. Mary Richards passed away at the age of 52, leaving behind her four sons, many beloved family members and friends, and her loving husband of 34 years.

Jerry Jeter married his college sweetheart, Allyson. The couple was blessed with a son, Austen and a daughter, Lauren. Like Jim and Mary Richards, they also lived the American dream. Jerry enjoyed a lucrative career as a CPA and manager of a medical group of dialysis treatment centers. In 2002, Jerry suddenly began to experience some personality and behavioral changes, including restlessness, being awake all night and the inability to make decisions. Then one day Allyson received a phone call from her husband’s employer, saying that Jerry had suffered cardiac arrest. Fortunately, he was at his workplace in the presence of many medical doctors when this occurred. A devout Catholic, Allyson reflected on that moment, saying, “God takes care of us.” It was later determined that the cardiac arrest was caused by a grand mal seizure. Tests showed the presence of a shadow on the brain, but there was no immediate definitive diagnosis. At one point, doctors believed that Jerry had a benign brain tumor. Unfortunately, Jerry eventually received the devastating diagnosis of anaplastic astrocytoma, a rare type of brain cancer. Doctors estimated a survival time of 15 to 19 months with treatment. At the time, Allyson did not 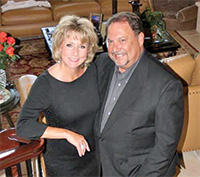 share this estimated projection with others. “I lived on facts,” she said. After his diagnosis, Allyson said that Jerry did manage to function, but was never the same as he once had been. On New Year’s Eve 2003, Jerry exhibited signs of confusion and another grand mal seizure. At that point, it was determined that the disease was progressing and that the end was near. Accepting that as fact, the Jeters chose to throw a party with about 150 people in a celebration of life. Jerry’s battle ended in March 2004.

With time as a healer, life went on for Jim Richards and Allyson Jeter. As Vice-President of Human Relations for Jim’s company, Allyson worked with three of Jim’s sons and had business contact with Jim, in her words “on the dotted line.” The two eventually enjoyed what Allyson thought was a business dinner, but turned out to be a precursor to a relationship. At that time, Jim was getting ready to retire from the company. Allyson asked him the date of his official retirement. “January 8,” Jim replied. The couple began dating on January 9.

The rest is a love story. Their engagement took place on Christmas Eve with their combination of six children each contributing a phrase in popping the question. The couple’s Marco Island home is a living reflection of a match truly made in heaven. In the living room, the lives of Mary Richards and Jerry Jeter are honored with shrines of their photos and personal belongings. Mary’s rosary beads give testimony to the sustaining power of faith. A flagpole on their shoreline displays an intersection of street signs in the crossroads of “Mary’s Island” and “Jerry Jeter Way.”

Since her passing, the ashes of Mary Richards have rested in a cremation memorial nature rock in the Marco Island Cemetery. Jerry Jeter was originally buried in Texas, but the family decided to bring his ashes to Marco Island to rest in peace in the nature rock. Jim said, “There are four slots in the rock,” explaining that it will be the final resting place for Allyson and him as well. With a smile, Allyson added, “We will be double dating for eternity!”

Jim and Allyson Richards have not only supported the American Cancer Society, but have touched our entire island with their generous spirit of giving. They tend to shun publicity, adamantly stating that their acts of good will are not done for the sake of recognition. Those of us who are blessed to personally know this phenomenal couple are well aware of this fact.

Jim and Allyson Richards know the suffering of those stricken with cancer. They know the devastation of loss. And they know the value of faith, family and love. Perhaps their greatest gift is their willingness to share this incredible story. Their story gives us hope.