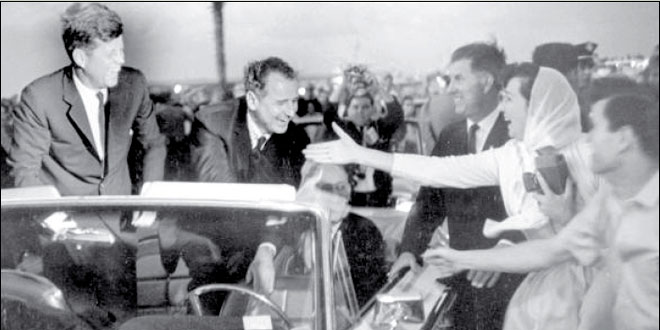 It is a common phenomenon to remember where one was when first hearing of a traumatic event. Where were you when you heard of the September 11 attacks? When Princess Diana died? When John F. Kennedy was murdered?

President John F. Kennedy was sadly gunned down in Dallas, Texas on November 22, 1963, marking this year as the 50th anniversary of his tragic passing.

But where was JFK just prior to his trip to Dallas? Only four days before his death, the President made a quick trip to Florida on November 18, visiting Miami and speaking in Tampa to several groups (Steel Workers, Florida Chambers of Commerce, commemoration of the first commercial airline flight from St Petersburg).

Of course, Florida was not unknown territory to the Massachusetts native whose family had an ocean-front vacation home in Palm Beach. He took advantage of our good weather to attend the Orange Bowl on New Year’s Day, 1963, tossing the coin before the game began.

The Everglades Society for Historic Preservation is holding a “Nostalgia Night” on Friday, November 22, this year with the theme “JFK 50th – Where Were You?” at 6 PM in the Jinkins Fellowship Hall behind the Everglades Community Church on the circle in Everglades City. The event is free of charge and light snacks will be served.

Everyone is welcome to share memories of that momentous day and to put a pin on the map to show where you were. If you would like to participate but can not be present, please email your recollections to ESHP@hotmail.com or send them to ESHP, P.O.Box 46, Everglades City, FL, 34139. The society also welcomes newspaper clippings for its Historical Library archives which are kept safely in Everglades City Hall.