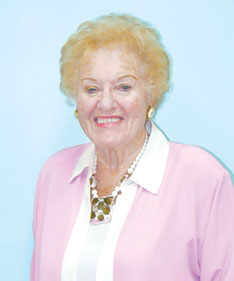 The Jewish Congregation of Marco Island will celebrate its 30th anniversary with a Gala Dinner Dance on February 18, 2012 at the Marco Island Marriott Resort. Marjorie Seltzer and Elena Rosner Fink, founders of the congregation, will be honored at the event along with the founding members who supported them in their amazing determination to start a Jewish house of worship on Marco.

Marjorie and Elena met on Marco Island and became casual friends. Their husbands were in the north still working and the two women started taking walks and attending a few events on the island together. Marjorie invited Elena to a Chanukah party at a temple off island and Elena was pleased to accept the invitation. Marjorie called back in a few days to tell Elena there was no room for her at the party.

“No room! No room for me? One person? I didn’t believe it. So, I called up the president of the synagogue.” ‘‘I’m so sorry, there is no room.” “There was no room even for one more person.” Elena was dismayed and, as she describes her feelings today, “I got mad!”

Marjorie and Elena talked about a synagogue for Marco Island. Deltona Corporation had set aside property for churches and they decided, “why not property for a synagogue?” They took responsibility for the next “baby steps” in their quest.

Marjorie investigated whether there were enough Jewish people on the island to start and sustain a synagogue. A few women were interested but the men she asked told her to forget it, it would never happen.

Elena called Deltona in Miami and spoke with Paul Schaefer, vice president of the company. She inquired about the requirements for securing land for a house of worship and learned there were three basic expectations. The congregation had to hold services regularly, had to be incorporated and building had to begin in a year from the granting of property.

Elena, a real estate agent on the island, was familiar with the property set aside for churches. She expressed a preference for the property on Winterberry Drive, where JCMI now stands, and asked how it could be reserved. Paul Schaefer replied. “You already have reserved it.”

The women were yet to have their first meeting and there they were with property reserved for the synagogue! They had no congregants and no money. Marjorie wrote an article for the paper which brought 14 people to their first meeting on December 20, 1982. The first people to respond were mostly women. The next meeting brought 65 people out, this time more men joined the women.

Many of the women who came without their husbands assured them they were going to a social gathering, that’s all! The fledgling group met with resistance from some members of the temple in Naples, as well as from their husbands. When their own husbands returned to Marco, Marjorie and Elena were told they were crazy to take on this impossible project. Elena’s husband said. “You are waiting to have surgery and you start planning a synagogue! What else are you planning to do while you wait?”

Marjorie wrote poems for each meeting to 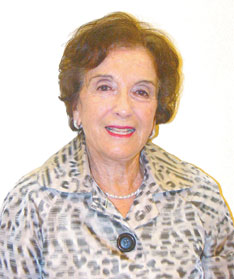 “give inspiration to the group and help people become enthusiastic about our plan.” Of course, the group needed to raise money. Marjorie and Elena found this task very difficult and were grateful to the late Hilda Betten, who became their first fundraiser. Hilda assigned everyone in the small group the names of Jewish families whom the women called to ask for donations.

At the second meeting, Laura Storob raised her hand and donated $100. This was the first donation and the moment when Elena realized, “my gosh, we are making history and we don’t even know it. It was such a moving experience, we got goose bumps. I never forgot it.”

Sam Spector, who attended the second meeting, offered to conduct regular services, one of the requirements for reserving the Winterberry site. In the Jewish faith, it is permitted for a male of the congregation to conduct services where a Rabbi is not available.

Paul Stein accepted the presidency of the fledgling synagogue at the same meeting. His wife, Gayle, promised, “l will bake!” Paul served two terms as president and along with his wife, was an active member and supporter of JCMI. Paul retired to Michigan a few years ago and died last year.

The group found encouragement from Christian churches already established on the island. One of the first donations the group received was from the Rev. Dr. Richard T. Disseler of the United Church of Marco Island. The first Passover Seder was celebrated at San Marco Catholic Church.

Marilyn Streit, one of Marjorie and Elena’s earliest supporters, opened her home to the first fundraiser and donated $5,000. Marilyn, who still resides on Marco Island, hosted many more functions and, according to Elena, “she lifted us up, we had nothing…without Marilyn, we would have died on the vine.”

Much more work had to be done. A sign was placed on the Winterberry property and more and more people became interested. The incorporation process began with the help of the late Attorney Walter Jackson of Marco Island. He prepared the incorporation documents and saw the process through to completion in April, 1983, pro bono. By that time, there were 54 families in the new congregation.

Dr. Melvin Raskin, who died in the past year, assumed the duties of conducting services for 14 years until Rabbi Greenstein came to JCMI in 1996. The building committee included Elena Rosner Fink, Arnold Lawrence and Robert Soloway. Irma Lawrence, Arnold’s wife, designed all the stained glass windows in the sanctuary, which was built by Slocum-Christian, who gave a very good price to the new congregation. It was the first house of worship built by the company.

Deltona Corporation granted extensions to the new congregation and the building was completed and dedicated in 1986. The small group of supporters raised more than $250,000 for construction and outfitting the sanctuary.

As the congregation grew a social hall, offices and meeting rooms were added. Presently JCMI has 300 members, many of whom are winter residents with homes and obligations to other synagogues in the north.

Rabbi Edward Maline remarked on the size of the congregation. “Because we are on an island in comparative isolation from 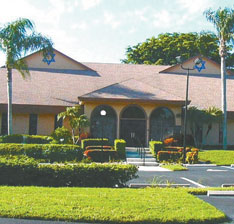 the larger community we don’t have a broad base from which to draw our congregation. In terms of numbers we are small but our people work very hard to make all the programs we offer possible. The congregation is involved with charitable work here on the island and in Naples and Immokalee. We provide assistance to Jewish Family Services which is a program run by the Jewish Federation of Collier County. On Marco Island we provide Oasis, which offers counseling services. Every year we have a number of spiritual, cultural and educational programs which are open to people of all faiths. The members of the congregation work very, very hard and, though their numbers are not great, their efforts make up for size and they give a Jewish presence on Marco Island.”

According to Harvey Brenner, 30th Anniversary Gala co-chair, “JCMI has become an integral part of the cultural and spiritual life of Marco Island. Rabbi Maline has put together an inter faith education program which began this month and includes 10 Christian churches and the synagogue. The program will offer a series of lectures and discussions about the differences in the ways we worship and hopefully bring about greater understanding among us.”

Visitors to any of JCMI’s social functions or religious services will be very welcome. If your stay on Marco is brief or long term you will be greeted warmly and know that you are in God’s House. JCMI has an active faith life to offer with Rabbi Maline as its spiritual leader, enhanced by the talents of Cantorial Soloist, Hari Jacobsen, who has been serving in the role for 16 years. Dr. Ron Doiron is Musical Director for JCMI and also serves as Director of Music at St. Mark’s Episcopal Church.

This vibrant faith community was made possible by the determination of two amazing women, Marjorie Seltzer and Elena Rosner Fink. Marjorie commented “I thought Elena and I were doing something for the community but we did it for ourselves, too, because we have received so much benefit. The land could have been used for a hot dog stand but we secured it for God. We rescued it for the purpose it was meant to serve. It was dedicated to God and has endured for 30 years. Hopefully, it will endure forever.”

Elena’s message is for all women. “Nothing is impossible. All because I was invited then I was turned down and I got mad! People got married here, people moved here because we had a synagogue. Focus on what you believe is right and move forward. Don’t pay attention to the critics. If your heart tells you it is right and it is the right time, the right place, the right historical moment, then it is what you should do. We have an expression, ‘bashert’, destined to be, preordained, and that is what happened to us.”

Rabbi Maline complimented Elena and Marjorie as very courageous women, very daring with a great deal of foresight. “The founders showed a great deal of devotion to their faith to work for a house of worship where they lived. We look forward to a long life for our congregation.”