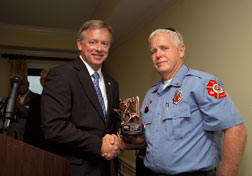 The community of Marco Island is mourning one of their bravest. Jerry Adams, a beloved member of the Marco Island Fire Department, passed away February 15th. Jerry served the MIFD for more than twenty years, joining the department in 1989. To become a firefighter at the age of 39 is not easy, but that’s exactly what he did. A master carpenter for much of his life, he chose a change in career to better serve the community he loved.

Jerry was known throughout the community for his generosity, kind spirit and love of fundraising. He also served as a mentor to young firefighters throughout his career.

His natural leadership earned him the first ever Marco Island Fire Rescue Foundation Fireman of the year award in 2007.

Although Jerry’s struggle with cancer was certainly tragic, it helped bring out the best in others; something he always did so well. As such a dedicated firefighter and family man, friends and family came together to support him in his time of need. Fundraisers held in his honor give proof to the remarkable man he was.

While Jerry is no longer with us on this earth, he is remembered by his family and friends along with the countless number of people he has helped throughout his lifetime. He will most certainly be remembered at the Fire Station as Jerry is in every room of the Department. From the baseboards and crown molding to the towel racks in the bathrooms, he was constantly working on the station, even during his down time.

The Coastal Breeze would like to extend their condolences to the Adams family as well as to the Marco Island Fire Department. Jerry was a leader among men. He will truly be missed.