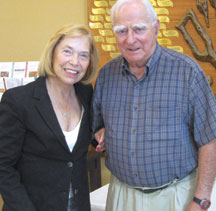 The Jewish Congregation of Marco Island held an Open House on Sunday, September 18 to welcome back returning members, visitors and prospective congregants. Rabbi Edward Maline, D.D., chatted informally with his guests and leadership members were present to offer tours of the synagogue.

Rabbi Maline noted that although a small congregation of some 200 families, the JCMI is very active, particularly during Season, thanks to the devotion of members who volunteer for all the spiritual and cultural events on their calendar. Sue Baum, a 12 year volunteer, along with her husband, Dr. Harold Baum, chatted about the pleasure she and her husband have derived from their long years of service since making Marco Island their home.

Sue, a retired lawyer, was planning to take the bar in Florida and continue practicing but after attending her first board meeting at JCMI, she decided that was her new calling. She gives much credit to her husband’s support in her new role as a committed volunteer and also in her life as a practicing attorney. Harold always encouraged her in her career and she was lucky to have faithful household help for 28 years.

Rabbi Maline has been a strong influence on Sue and Harold since he accepted the position as Rabbi on Marco. His leadership was formed during his years in London and Paris. He is a learned, dynamic speaker, an outstanding leader. Sue shared an amusing story about Rabbi Maline. He serves on the Council of Clergy on Marco Island. The question was asked during a meeting who would take the presidency of the Council? Rabbi coughed at the wrong moment and was made president!

Harold and Sue have run the Bingo at JCMI for 12 years. Sue said, “I could never manage the Bingo without Harold. He is always a great help.” He is an excellent photographer and has great computer skills. He does the printing of flyers and tickets which is a significant cost saving measure. Sue and Harold manage the Saul I. Stern Cultural Series which will have 3 special events this Season: Dr. Bernd Wellschlaeger, author of “A German Life” and son of an SS officer, will speak about his conversion to Judaism on January, 22, 2012. The Naples Philharmonic Brass Quintet will present a concert of classical and popular music on February 15, 2012, and The Terrorist Cop, Mordecai Dziansky, will recount his fascinating work on the streets of New York and his training with Israeli experts in dealing with terrorism.