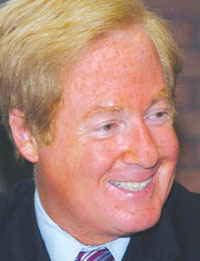 Emerson at a convention in June 2008. SUBMITTED PHOTO

The Jewish Congregation of Marco Island and the Jewish Federation of Collier County opens the 20th season of the Saul I. Stern Cultural Series on Wednesday, Jan. 29, with Steven Emerson, internationally recognized expert on terrorism.

The series is named for Saul I. Stern, of blessed memory, who was the force that gave this series its outstanding reputation. He was devoted to the Jewish Federation, the Jewish Congregation of Marco Island, his community in the Washington DC area and a tireless worker in support of the State of Israel.

Steven Emerson started “The Investigative Project” in late 1995, which holds the largest data base on terrorism and national security in the world. Through the years, he has become the consultant to world leaders, presidents and prime ministers.

Steven Emerson has appeared on all major networks, including the Fox News, “Today Show,” “Dateline NBC” and CBS’s “48 hours.” He has testified more than two dozen times before Congress and the National Security Council at the White House. Emerson also has been the recipient of the Middle East Forums’ Albert J. Woods Public Affairs Award which “honors individuals who have made important contributions to the attainment of peace in the Middle East and have enhanced American understanding of the turbulent region.”

For additional information and tickets, please contact the JCMI office, at 239-642-0800.