JCMI and The Dead Sea Scrolls 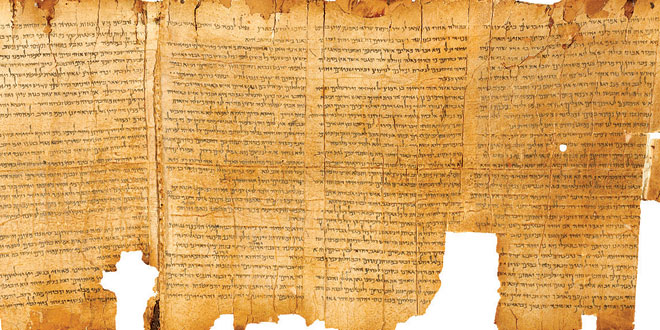 The Jewish Congregation of Marco Island presented a fascinating program about The Dead Sea Scrolls on Wednesday, March 6th, as the third event in the Saul I. Stern Cultural Series. The series is in its 19th year, a record for a cultural program of this nature. The Marcia Stern Educational and Cultural Trust, established by the late Saul Stern in memory of his wife, is the principal sponsor.

Sue Baum thanked Andrea and Terrence McCreanor for their long time support of the series. Mr. McCreanor of Morgan Stanley has provided invaluable investment advice to JCMI for many years. Sue and her husband, Dr. Harold Baum, have been supporters of the series, as well as many members of the JCMI congregation.

Roz Davidson-Hoffer, an award winning writer and teacher with assistance from her husband, Howard Hoffer, presented a fascinating account of the first discovery of the Dead Sea Scrolls in 1947 and the subsequent research conducted which verified their authenticity. 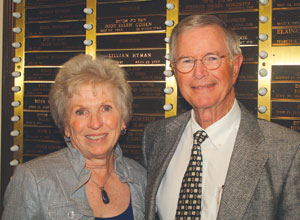 Terrence McCreanor and wife Andrea of Morgan-Stanley Company were the sponsors of the “DEAD SEA SCROLLS” program at the Jewish Congregation of Marco Island.

scrolls were discovered. The scrolls were found in 11 caves along a rock plateau on the northwest shore of the Dead Sea in Qumran located in then, British Mandate Palestine, now known as the West Bank. Qumran is about 13-14 miles from Jerusalem.

Bedouin shepherds climbed the rocks to retrieve sheep who had strayed from the flock and found the caves. They found the first of the scrolls wrapped in linen cloth and stored in clay jars. Word of the discovery spread quickly and interest was high among archeologists and scholars.

The Arab-Israeli War interfered with further discovery until the late 1940’s. Excavation of the site began under the authority of the Jordanian Department of Antiquities. More caves were discovered and some 800 + individual scrolls were ultimately identified.

Carbon 14 dating was used to determine the age of the linen cloth in which the scrolls were wrapped. The clay jars were identified as having been made locally by the Essenes, who lived nearby some 2000 years ago.  It is generally agreed that the

Essenes were the source and protectors of the ancient scrolls. In our time, scholars and researchers have the benefit of modern DNA technology to confirm earlier estimates of the age of the scrolls.

They were written in Hebrew, Aramaic and Greek. The scrolls include some of the oldest accounts of biblical manuscripts, psalms, community rules and Jewish life in ancient times. The Great Isaiah Scroll is among the longest and is the earliest record of the Book of Isaiah. The Temple Scroll is the longest, some 27 feet long. It describes in detail a temple which provides courtyards designated according to the purity of the worshipers. The temple was never built but the scroll reveals the profound “call to purity” which is integral to Judaism.

The present location of the scrolls is The Shrine of the Book in the Israel Museum in Jerusalem. The scrolls are exhibited in rotation to protect them from further deterioration. The scrolls are considered one of the greatest discoveries of our time.  Research and study by scholars continues to this day.