JAMFEST | The Little Concert That Could 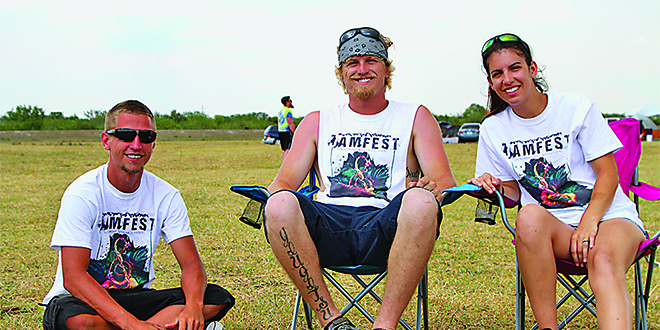 It was an uphill battle for young Jamfest creator Michael Bowen. Michael had the vision and some success with his first Jamfest, so, why not try it again? He had the bands all lined up, vendors were set, the field was rented, the event received publicity and it appeared the county gave a stamp of approval. Well, everything was set except the county informed Mike a few more stamps of approval were required which were lacking. So, Jamfest is postponed until fall. The concert that WAS, wasn’t. However, the private party that ensued was pretty good after all.

In total, about 15 groups still hung out. The crowd was made up of either close friends of Mike’s, or others that just wanted to “see what happens,” or friends of musicians who decided to stay. By Sunday, it seemed several musicians just wanted to see other musicians jam. There were many excellent performances and no matter what type of music you liked, there was something for everyone.

If you liked camping, you had it made. Tents were set up around the field in little groups of friends and acquaintances. Everyone looked out for each other and Sunday morning’s “last call for breakfast” was fitting as 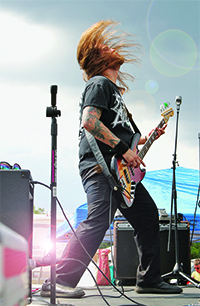 At one point, Mike got on the stage to announce Castafellas as one of his favorite bands. The lead guitarist not only sings, but writes all of their music. They had the audience moving. There was a bit of heavy metal like About to Expire, who definitely met a vocal challenge, and if a demon from hell could sing, this was it. For the Future took the stage but had some technical difficulties. Swamp Rats were a different genre for the majority of the crowd but very talented and their conversation with the audience groomed them with anticipation for what was to come with their next song. Other big hits were DWR and the band that followed which had the biggest group of fans in front of the stage. Sunday saw a few more highly anticipated musicians, Little Eddie and the Fat Fingers, Junction, and Slow Ocean, to name just a few. Even if they were just practicing together, it was obvious a few people had chilled all weekend just to see them jam.

If everyone in attendance invited a couple of friends to Jamfest this fall, Mike Bowen and friends could have a fantastically successful event. Watch for it this fall!