It’s Little League All Over Again! 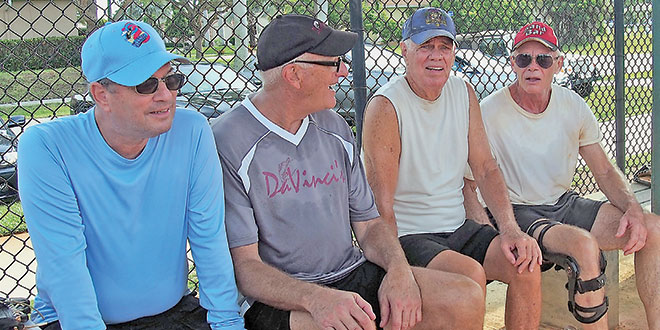 “It’s hot out there,” and (from left) Don Schwartz, Jimmy Williams, Ray Niemeyer and Jeff Hultgren try to cool off.

“It’s gonna be a hot one,” yelled one of the guys, as players begin to file into the dugout at a recent softball pick-up game at Winterberry Park. Except, these are not your average ball players. They are members of the Marco Island Senior Softball League.

Ages ago, many of these guys played on teams in college, but some have not played since high school. They got married, had kids, moved around a lot. Then retirement came.

They’ve been waiting for this moment for a long time – they are not the “smell the roses” types. They want to take back their lost youth and “it’s a good excuse to stay in shape,” remarked Wayne Bombacci. They claim the pick-up games are non-competitive, but nobody here likes to lose – even if it is just a summer pick-up game.