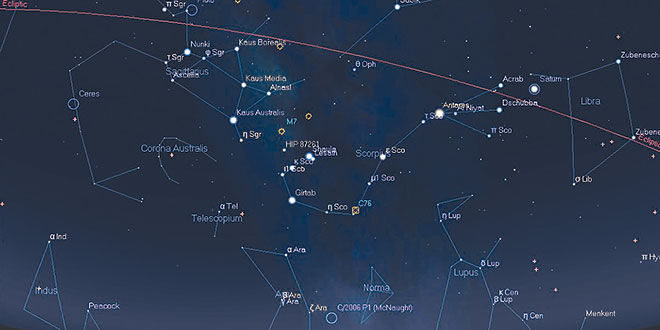 Looking South, 9:00 PM September 4, but it’s possible to use the chart all year around! SUBMITTED PHOTO

We covered the subject of this article several years ago, but it is an important one so it bears repeating. As there is nothing spectacular going on tonight (and it’s probably cloudy anyway considering it is rainy season) we will dive right in.

You are undoubtedly aware the movement of the sky is a very regular affair. Until the mid-twentieth century the sky was the ultimate standard to which earthly timepieces were set. But it is also very easy to understand and make allowances for. Did you know that you can keep tonight’s chart (and all of our published charts, too) and use it at anytime of the year by making a simple time correction?

The accompanying chart shows the Milky Way in the south at 9:00 PM on September 4. The rule is you add two hours for each month previous to the listed date and subtract two hours for each month subsequent to the listed date. The sky will look precisely the same at 7:00 PM October 4, and was the same at 11:00 PM August 4. If you wish to look at the sky on January 4 using this chart, calculate 4 months x 2 hours = 8 hour time difference, add it to the listed 9:00 PM time and the sky will look just like this at 5:00 AM. With just slightly less accuracy you can use one hour for a two week time period or one-half hour for a week.

Note that 12 months x 2 hours = a 24 hour time correction, so next September 4 at 9:00 PM the sky looks just like it does tonight! The nice round numbers are no coincidence of course – the ancients who invented timekeeping and our calendar based both on the sky, and created convenient units to match.

The major exception to the two hour per month rule are Solar System objects like the Moon and planets – they move around! The very word “planet” is derived from the ancient Greek word for “wanderer.” Venus and Mercury can move noticeably in a single day, while slowpoke Saturn might spend two years in a constellation. The Moon moves its own diameter in a single hour. If you are using an old chart and you see a bright star not on it, it’s a safe bet it’s a planet.

I erred a minute ago when I said nothing spectacular is going on tonight – Saturn is always spectacular! Earth is in a position now where it is possible to see Saturn’s shadow fall on its rings, giving a nice 3D viewing effect. The sky normally appears very flat in a telescope eyepiece – and you will need to use a small telescope; at least 30 power to see the rings, more like 100x to see the shadow.