It’s a jungle out here!

Panthers, bobcats and gators, oh my! The residents of Goodland may like to think that they are the dominant population in our tiny island village, yet recent wildlife encounters are beginning to prove otherwise. While many of these sightings are incredibly rare, they are, in my opinion, completely terrifying.

In a recent endeavor to get more exercise I have attempted, on at least three occasions, to ride my bike to Marco and back. While cruising along the Betty Bruno Path that leads in and out of Goodland, I, unfortunately, became aware of a new population among us. A ray of light shone through the mangroves at such an angle that the web of a banana spider came into my view. I stopped my bike to take a look and began to shake at the mere size of the creature. It was almost the size of my hand! Considering the fact that my old basketball coach told me I had “Michael Jordan hands,” this spider was huge.

I hopped back on my bike to get the heck out of there but as I rode I realized they were everywhere! Never will I ever step foot into the mangroves after seeing these spiders. I will also probably use it as an excuse to no longer ride my bike for exercise.

While casually sipping a beer at Marker 8, this next sighting encouraged me to never get in the water around Goodland again. As Goodland is part of the 10,000 islands chain it is surrounded by salt water. One would think that we would be safe from the freshwater alligators of the Everglades. Unfortunately, on this particular day, that theory was debunked. Due to the massive rains we receive during the summer months, the water can become brackish enough for these beasts to swim through it.

Everyone at Marker 8 was shocked to see a six to eight foot gator slowly cruising past the restaurant. Encounters such as this are normally few and far between. However, when I tried to take my dog for a swim a few days 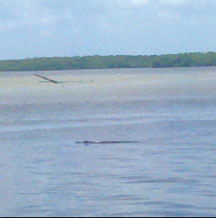 later I found out the gator was back. She will not be going back in the water until the rainy season is over. I, on the other hand, will never go in it again.

Thankfully, I was fortunate enough not to have witnessed this next encounter. The story, as unbelievable as it may sound, is absolutely true. After the gator sighting, a friend of mine told me he had recently seen a bobcat in an open field on Goodland. As we were drinking beers at the time I assumed he was exaggerating. Yet, only a few days later the bobcat was spotted again. It apparently made a home in an overgrown lot in the middle of town. Locals became concerned for their safety as well as the safety of their children and pets.

A quick call to The Conservancy in Naples led to some interesting developments. Everyone was hoping The Conservancy would come down and trap the bobcat and release it. Theay informed us that if they were to catch it they would have to euthanize it. Their suggestion: call a trapper.

One would think a “trapper” would be eager to trap a bobcat as their name suggests. However, he gave some rather unusual advice instead. According to this trapper, bobcats hate the smell of male carnivore urine. The best way to get the bobcat to leave would be to have men in the area urinate on the lot where the bobcat was spotted. So that’s exactly what happened and the bobcat hasn’t been seen since!

Other recent sightings include the not-so-frightening rosette spoonbill and a cute, yet dangerous panther cub.

These sightings prove that the wildlife in our town is not only limited to Sundays at Stan’s. So beware the next time you head to Goodland. You never know who or what you might run into.