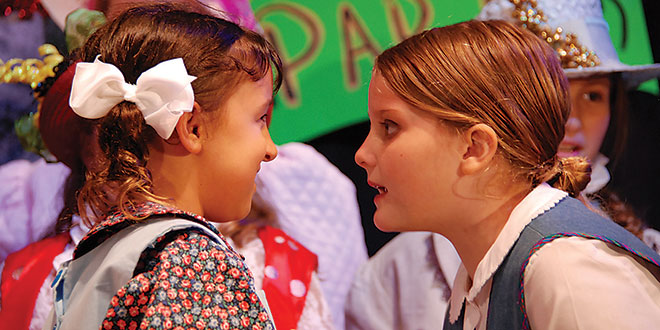 Alexis Popick and Karly Hassell demonstrate just how stubborn Iowans can be.

For three magical nights — Nov. 21-23 — Marco Lutheran Church was transformed into River City, Iowa, as The Island Theater Co. presented Meredith Wilson’s “The Music Man Jr.” The cast played to packed houses each night, as they told the story of Harold Hill’s transformation from ne’er-do-well con-man to leader of the band through the well-known music and lyrics of “76 Trombones,” “Wells Fargo Wagon,” “Gary, Indiana” and “’Til There Was You.”

Sponsored by APM Custom Homes, the production ushered in the official holiday season on Marco Island and the opening of a month full of holiday cheer and festivities coordinated by Christmas Island Style. This is ITC’s fourth season as a part of Christmas Island Style, and company founders Pat Berry, Jean Rowles and Pattie Ziesig again enlisted the help of Marco Lutheran Church and the Island Dance Academy to make the production a reality.

Traveling salesmen are chugging down the track toward River City, Iowa,singing the woes of their profession.

Man Jr.” is an abbreviated version of the 1957 Broadway hit “The Music Man,” with book, music and lyrics by Meredith Wilson. When the original play debuted in New York City, it won five Tony Awards, including “Best Musical,” and ran for 1,375 performances. Additionally, the cast album won the first Grammy Award for “Best Original Cast Album” and spent 245 weeks on the Billboard charts. Robert Preston played the infamous Harold Hill in the original Broadway show and in the 1962 film adaptation.

The cast and crew of the Marco Island production began working on it during ITC’s three-week summer camp in July. Initial auditions were held during the camp, and additional auditions were opened up in August. Rehearsals began in September, and for three hours every Sunday for three months, directors Jared Wagner and Emily Boyer, choreographer Natalie Strafford and musical director Lucille Gaita morphed their cast of more 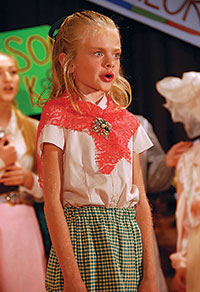 Elizabeth Hobbs, as one of the River City townspeople, anxiously awaits thearrival of the “Wells Fargo Wagon.”

than 40 children into the wide array of characters and personalities that populate Wilson’s fictitious River City, Iowa.

Behind the scenes were Debbie Pinizzott, as costume mistress; Mollie Boyer, as production assistant; Davis Tobiaz and Leesa Carls, as lighting design; Emily Boxma, as stage manager; Julia Byrne, as master of the stage decor; and Craig Greusel, as the sound guru.