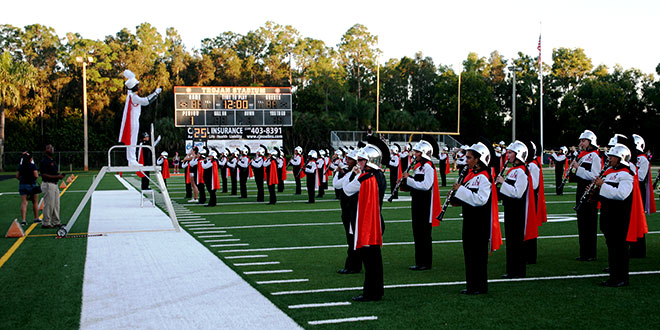 The Naples Golden Eagles got away with a victory in the 41st annual Coconut Bowl at Lely on Oct. 3, but it was far from pretty.

Naples won, 20-6, but its vaunted offense and defense had their hands full with Lely.

A blocked punt and a pass interference set up Naples’ only touchdowns. Naples outstanding kicker Jerry Nunez contributed field goals of 51 and 31 yards.

The longest run of the game was by Lely’s Wendell Joseph five minutes later. He raced 53 yards and Lely got to the Naples 22, but the drive stalled. A chance for any points ended when Lely’s field goal kicker missed a 27-yard attempt.

Lely shot themselves in the foot on another drive

Lely quarterback Lik Estilien drops back to pass in the Trojans 20-6 loss to Naples in the 41st annual Coconut Bowl at Lely. Estilien threw just one pass as the Trojans concentrated on its run offense.

at the end of the first half. With under two minutes to go Dieuvenel Tanis hauled in a deflected pass, good for 39 yards setting Lely up at the Naples 31.

Then it was all bad news. A false start penalty. A Lely fumble it recovered, set them back another 15 yards. A holding penalty and finally a delay of game pushed the ball back to the Trojan’s own 43 as the half ended.

Naples scored just 82 seconds into the game when the Golden Eagles defense blocked a Lely punt at the Trojans’ two-yard line and Michael Walker scored on the next play.

Its second score came with 3:49 in the third quarter, after a pass interference call. While most watching the play saw the Naples receiver grab the Lely defender’s face mask so he

Lely cheerleaders rev up the fans during the 41st annual Coconut Bowl.

wouldn’t intercept the pass, the referee saw it another way. He called it against Lely, setting Naples up inside the Lely 10. Two plays later Antonio Carbonaro ran the ball in for the score.

Every Lely play was a run, except the one deflected pass. Lely was held to 142 yards rushing, with 181 total yards. The Trojans defense held Naples to 173 yards, nearly 100 yards less than Naples has been averaging. The Eagles 20 points was the second lowest since 2010. Naples finished with 214 total yards, the first time this season that it hadn’t gone over 300.

The Naples band continued its usual playing when the Lely offense was in front of the band. Naples uses the tactic in every game.

Lely, 2-3, travels to Gulf Coast in a non-district battle on Friday at 7 p.m.