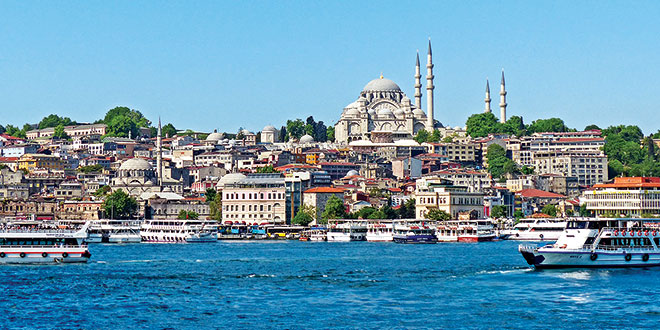 The Golden Horn of the Bosphorus divides ‘old and ‘new’ Istanbul.

When we first planned our trip to Istanbul, I was surprised how many people told me that their dream was to travel there or that it was on their “Bucket List.” Everyone I knew who had visited told me that it was beautiful and that we would love it; they were right.

It’s difficult to capture the essence of the city in words. There are the cliches of old and new, where east meets west. In a small way, the city reminded me of Budapest where the Danube divides the historical Buda from the more modern, commercial Pest. In Istanbul, it is the Bosphorus Strait and its Golden Horn that divides the European side from the Asian side and the old from the “new.”

Although probably inhabited earlier, the Greeks colonized Istanbul, giving it the name Byzantium. In the 300s, it was declared the capital of the Roman Empire and renamed Constantinople. Upon the division of the Roman Empire into East and West in the 400s, it was the capital of the Byzantine Empire. In the 500s, it became the core of the Greek Orthodox Church and later the center of the Catholic Latin Empire. The Patriarch of the Eastern Orthodox Church is still located here.

In the 1400s, Constantinople was conquered by the Ottomans, and with its new name of Istanbul, was designated the capital of the Ottoman Empire. Under Sultan Mehmed, people of all religions were encouraged to live in Istanbul and the city prospered. In the 1500s, under Suleiman the Magnificent, the city continued to thrive. It remained the Ottoman Empire until defeated by the allies in World War I.

Following a War of Independence led by Mustafa Kemal Atatürk, the Republic of Turkey was established in 1923, and the capital located in Ankara. Turkey was neutral during most of World War II, joining the Allies in February 1945. There are artifacts of the Classical, Roman, Byzantine and Ottoman eras throughout the city, and Istanbul was named to the UNESCO World Heritage List in 1985.

As with Rome, Istanbul was built on seven hills. From the rooftop terrace of our apartment in the “new” part overlooking

Our apartment was on the ‘modern’ side of the Bosphorus, below the Galata tower.

the Bosphorus’ Golden Horn, the skyline, with its domes and minarets of the many mosques and stately buildings, is unique and beautiful. Add to that, the calls to prayer by the Muezzins throughout the day, and it is all quite exotic.

The public transportation system, a patchwork of trams, buses, ferries, funiculars and historic trolleys is good. It is easy to reach almost any place that one might want to visit, and taxis are readily available and reasonable.

The first thing that struck me in this city of 14 million people is how crowded it was, particularly in the tourist areas. We were there not in the height of the tourist season, but the lines at popular attractions were long and throngs were everywhere. On the days that there were two cruise ships in port, the historic areas were best avoided. The main shopping street, Istiklal Caddesi, was a moving sea of humanity. We were glad that our apartment was in a less touristed area, for it was a quiet, peaceful refuge, with many cafes, restaurants, galleries and shops close by.

The second thing that impressed me was how kind the people were. Yes, the hucksters at the Grand Bazaar and around the tourist area of Sultanhamet were annoying. But, ignoring them worked, and some of them brought smiles to our faces with their well rehearsed opening lines, such as “How can I help part you from your money today?”. Throughout our visit, there were many instances of kindnesses extended.

Being proverbially Swiss, I arrived at Dolmabache Palace, the administrative center of the Ottoman Empire built in the 1800s, half an hour before the first English tour; the only way to see the Palace is with a tour. Ironically, the other person who also showed up that early was a young man from Switzerland! Rather than make us wait the half hour, the guard approached a Korean tour group whose guide was about to lead his group in English and asked if we could join them. That meant that we then were ready for the tour of the Harem half an hour before the first one. To fill the time, the

The historical trolley on Istiklal Caddesi. PHOTOS BY VICKIE KELBER

guard there lead us on a short cut to the art gallery with its National Palaces collection and gave us a private tour of the paintings. We returned in time to join the first tour of the day at the Harem.

Another day, I wanted to take the historic trolley that traverses Istiklal Caddesi. At the end, it circles Taksim Square and then returns to the top of the street to pick up the next group of passengers. I was at the far side of the Square when it slowly passed me, and I asked where the stop was located. The driver stopped the trolley, the conductor opened the security gate and invited me onto the trolley far from the designated stop. He told me I was “special” and could ride to the stop thus insuring I would have a seat. The conductor struck up a conversation with me. He said his English wasn’t very good and used his iPhone to translate when he didn’t know a word. Just before we got to the actual stop, he used his phone to wish me a “good trip” and then went off to let on the other passengers.

Another time, I saw a young bride and groom having their photo taken. I asked if I could also take a photo. They smiled and said yes. After taking their photo, they insisted I stand with them to have a photo taken of the three of us.

As my husband was back at the apartment nursing his Achilles tendonitis, I felt very safe throughout the city by myself, although I did have one incident. Our local contact had told us about the Syrians who have been displaced by the war. (Note: This was prior to the more recent escalation of fighting in Syria and mass exodus of refugees to Turkey.) The Turkish government provides refugee camps, but many have left the camps to come to the city and have been reduced to begging. She asked that we not encourage them by giving them money. As I came out of our apartment one morning, a couple with two children were walking up the street. The

Two guards at Dolmabache Palace went out of their way to accommodate me when I arrived too early for the first tours of the day.

man had a sign in Turkish; I’m assuming it was asking for money. The woman came up to me and tapped me quite hard on my arm. I looked right at her and sternly said, “çok ayip,” which basically means “shame on you” in Turkish. She backed off immediately.

We had been warned of two scams to avoid. One is a shoe shine man dropping his brush. When you go to pick it up, he will shine your shoes and then demand money. We did pass one who dropped his brush. I ignored it and walked on. My husband, who can sometimes be an easy mark, didn’t totally fall for it, but he did point out to the man that he had dropped his brush. By then, I was far ahead of my husband, and he scurried to catch up, thus avoiding any further scam.

We also had been warned about salesmen, especially in the Grand Bazaar, offering tea and then proceeding with a hard sell. The only tea I was offered was when I went to a local, non-touristed restaurant for take out. After I gave my order, I was invited to sit at a table and brought a glass of apple tea “on the house” in one of those delightful tulip shaped glasses. The bill for the food was 27 lira. The lowest denomination of paper lira is 5; single liras are coins. I gave the cashier 30 lira, and he gave me back a 5. When I noted that was not right, he, who didn’t speak English, indicated not to worry about it. The next day, when I returned for take out once again, I added 2 lira to my payment, and he smiled and thanked me in recognition and again offered tea.