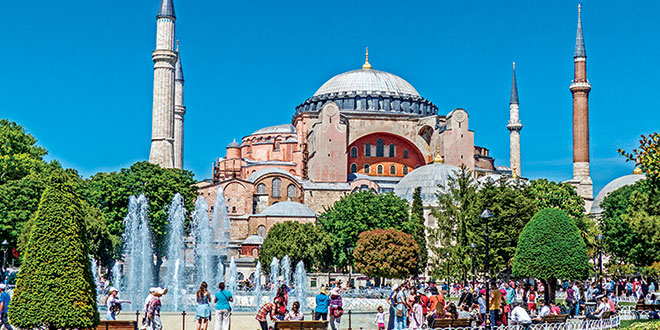 Whether visiting Istanbul short term as a cruise port or enjoying an extended stay, the top tourist sights are found in the Sultanhamet district.

Also called the Old City, Sultanhamet is the seat of Ottoman Istanbul. The triumvirate of Topkapi Museum Palace, the Hagia Sophia and the Sultanahmet Mosque, more commonly called the Blue Mosque, are adjacent to each other. If visiting on your own, when you descend from the tram at the Sultanhamet stop, it may seem a bit confusing, particularly with the crowds and hawkers selling sight-seeing tours and cruises. Just ignore them or shake your head “no,” take a deep breath, orient yourself with a good map (or ask directions at the nearby Information center) and walk on.

Home to the Ottoman emperors for 400 years, Topkapi Palace was originally built in the 1400s by Mehmet II. As subsequent sultans ascended, additions and changes were made, making the complex what may seem a hodgepodge of buildings, courtyards and architectural styles. The State and Imperial treasuries contain richly jeweled artifacts, including an 86-carat diamond, Süleyman’s ebony throne and the famed Topkapi dagger. The emeralds and rubies may take your breath away!

The Hall of the Holy Relics houses artifacts revered in the Muslim religion, including items that belonged to Muhammed; there are also relics from John the Baptist, David, Abraham, Joseph and Moses. A separate ticket is needed to tour the Harem, the more than 300 rooms that housed the Sultan and his family which included wives and concubines and the most important female, his mother. Only about 20 rooms are open to the public.

The restaurant at Topkapi, Konvali, provides an opportunity to relax and enjoy the expansive view over the Bosphorus. Expensive 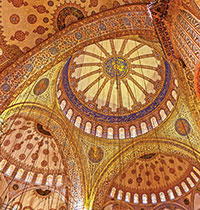 Detail of the interior of Sultanahmet (Blue) Mosque.

for Turkey, it is well worth the price to take a break and enjoy a leisurely meal with that view.

If you are not with an organized or private tour, the lines can be long to enter Topkapi. Purchase of a Museum Pass which provides three or five days of access to Topkapi, Hagia Sophia and other places of interest allows one to skip the line. Within the complex, lines can also be long at the treasury and Harem. Between 12 and 2 are usually good times to visit, as tour groups are busy with lunch. We went to the Harem after our lunch; there was no line, and we also noted that the lines were down at the Treasuries.

Incidentally, the tram stop for Topkapi Palace is, as noted above, Sultanhamet. There is another stop called “Topkapi” that has nothing to do with the Palace and will take you to a neighborhood outside the Sultanhamet district.

Hagia Sophia, also known as Aya Sofya (“Divine Wisdom”), dates from the sixth century when it was commissioned as the central church of the Eastern Orthodox Church by Emperor Justinian I; for many years, it was the world’s largest church. Despite damage by earthquakes, pillaging during the Crusades, and being turned into a mosque upon the fall of Constantinople to the Ottomans in the 1400s, it is a Byzantine architectural delight, and some of the early mosaics have endured.

Lines can also be long at Hagia Sophia. The day we went, our wait was minimal. However, I passed by a few days later when there were two cruise ships in town, and there were throngs waiting to get in. There is talk of turning Hagia Sophia, now a museum, back into

View from Topkapi Palace; its restaurant is to the right. PHOTOS BY VICKIE KELBER

a mosque. It will be interesting to follow this story in the future.

Sultanahmet, or Blue Mosque, with its six minarets, is imposing from the outside. Its richly decorated interior with more than 20,000 tiles, including many of cobalt blue which gives the mosque its nickname, is even more impressive. The night illumination of both the Mosque and the German Fountain in front of it is beautiful. The fountain is so named because it was a gift from Kaiser Wilhelm II. The mosque is closed for periods of time during the day for prayer. When we were there, it was closed, among other times, from 12:30-2:00 PM. You must take off your shoes to enter; plastic bags are provided. Women must wear head scarves, and shoulders and knees should be covered.

Adjacent to the Sultanahmet Mosque is a strip of grass known as the Hippodrome because it was where Constantine held chariot races. Once seating 10,000 spectators, all that remains are an Egyptian Obelisk and Serpentine and Constantine columns.

Across the street from the Hagia Sophia/Sutanahmet Mosque complex is the underground Basilica Cistern constructed by Justinian I in the sixth century to store water brought in by the aqueducts. Having read Dan Brown’s “Inferno,” in which the final action takes place in the Cistern (it was also used in the James Bond thriller, “From Russia with Love”), I wanted to visit. While not an absolute “don’t miss,” the eerily lighted, dripping pathways among the many columns, two Medusa heads and pools of fish were interesting.

Two tram stops, or a very doable walk away, is the Grand Bazaar. A covered center of trade since the 1400s, it has 18 entrances and thousands of shops, as well as currency 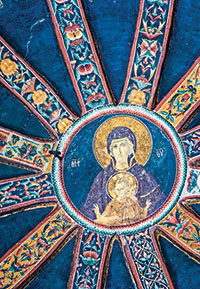 Detail of the interior of the Chora Church Museum.

traders, restaurants and some remaining workshops. Even though I am a shopper, I am not fond of crowds, pushy salespeople or bargaining, so it wasn’t for me. It is a place that should be seen, and if you enjoy the art of bargaining, do buy something! I had already purchased some scarves at a non-touristy market for 17 lira (about $7.65US). Curious, I asked the price at one shop for a similar scarf. His beginning asking price was 65 lira! I nodded my head and quickly walked on.

For shoppers, I would also recommend the small, one-lane Arasta Bazaar found on the side of the Blue Mosque. It has a sampling of many of the goods found at the Grand Bazaar, but of good quality and there are no crowds or hassles from sales people. There are also some quieter cafes all of which provide a much more pleasing shopping experience.

A 15 minute walk from the Grand Bazaar leads to the Spice (Egyptian) Bazaar. Oh, the colors and fragrances from the piles of exotic spices, candies and other delights! Dating from the 1600s, there are also souvenirs to be found here. The stands on the outside perimeter are where locals buy cheese, olives, sausages (no pork), produce and other goods. Avoid it on Saturdays, the most popular shopping day, and also on days when there are cruise ships in port.

There are two sights that I would recommend that compliment what one sees in the old town and really should not be missed.

In the 1800s, with the influence of Westernization, a new palace to replace Topkapi was built by the sultans on the Bosphorus. Dolmabahçe Palace has to be seen to be appreciated. Its rich decor 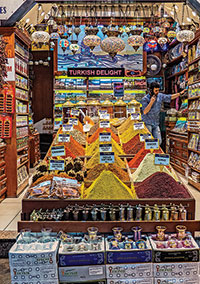 Some of the Turkish delights that can be purchased at the Spice Market.

with its 14 tons of gold, crystal, marble, alabaster, carpets, furnishings and paintings rivals if not exceeds any palace I’ve ever seen and makes it easy to see why it is said the building of this structure helped bankrupt the treasury of the Ottomans. No expense seems to have been spared. Even the Harem is more ostentatious than some royal palaces I have visited. The Palace and Harem can only be viewed with a tour, and English tours are available. A set number of people are permitted entry daily, so during high tourist season, it is important to arrive early.

Finally, Chora Church Museum (Kariye Müzesi) should be on a “must see” list. Far from the old town, it is reachable by bus #32 from near the Galata Bridge, #87 from Taksim Square or by taxi. Although it is presently being restored in three stages, which requires part of it to be closed for what will probably be a few years, it is worth a visit. The detailed Byzantine mosaics and frescoes telling stories from the Bible are remarkable. A bonus is that the museum is located near the old city walls so you are able to see them, and, depending on the route taken by bus or taxi, you just might traverse the boulevard that passes under the arches of the Roman aqueduct.