Israel, Palestinian Statehood and the USA …

If you pick up a map of the Middle East and see how tiny the State of Israel is; try looking at a map of the world and try and find Israel on it. This is a truly daunting task because Israel is indeed a very small yet very significant little democracy in the Middle East. In effect, it is the ONLY democracy, surrounded by countries run by dictators, kings, emirs and sultans. Israel is an ally of the United States and at the present time in grave danger of attack from her so called neighbors.

Yet, the United Nations General Assembly is on the verge of recognizing a Palestinian state in a unilateral step which will embolden the radicals and put Israel in greater danger. Meanwhile, even the “moderate” Palestinians indicate that this is not a step toward peace as portrayed in the Arab and some western media; but merely an interim step in Palestinian Statehood forced on Israel without any further meaningful negotiations between the parties. Why is this recognition of a Palestinian State so important and what are the ramifications of such a decision on America and Americans?

In order to understand the situation clearly, one must examine the geography of the area as well as the history of how Israel has managed to exist and prosper there for almost 63 years. The State of Israel covers an area which is slightly larger than the State of New Jersey. She shares borders with Egypt, Gaza Strip, Jordan, Syria, Lebanon, West Bank and the Mediterranean Sea in the West. With a total population of slightly over 7 million people, Israel is America’s only true ally in the Middle East for many reasons.

In the North East, Israel borders with Syria, a client state of Iran which is presently experiencing an “Arab Spring” of her own where the government of Syria under the leadership of Basher Al-Assad and the Socialist Baath Party is killing its own citizens by the hundreds. Israel and Syria have fought wars before and have an ongoing border conflict involving “Golan Heights”; a strategically important high ground between the countries.

In the North, Israel shares a long border with Lebanon; a mostly unstable client state of Iran via Syria, which is presently under the influence of Hezbollah, a Shiite Muslim political group with a strong military wing the United States defines as a terrorist organization. Hezbollah was 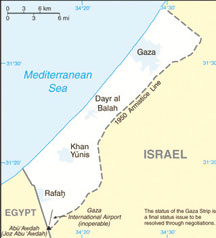 founded in 1982 in response to the Israeli invasion of Lebanon. It is led by a man named Hassan Nasrallah, originally a military commander, who studied in centers of Shiite theology in Iran and Iraq. Hezbollah draws inspiration from the Iranian revolution; they receive training from Iran’s Revolutionary Guards and funds from Tehran, and have close links to Iran and Syria. U.S. government Intelligence officials estimate that Hezbollah’s weapons arsenal includes between 40,000 to 80,000 short and long-range rockets, as well as anti-aircraft, anti-tank, and anti-ship weapons.

In the East, Israel has a border with what is known as the West Bank. The September 1993, Israel-PLO Declaration of Principles on Interim Self-Government Arrangements provided for a transitional period of Palestinian self-rule in the West Bank and the Gaza Strip. Under a series of agreements signed between May 1994, and September 1999, Israel transferred to the Palestinian Authority (PA) security and civilian responsibility for many Palestinian populated areas of the West Bank and Gaza Strip. Fatah organization (which was originally started by Yasser Arafat) dominated the PA governing the West Bank. Present president of PA Mahmoud Abbas has said he will not resume negotiations with current Prime Minister of Israel, Benjamin Netanyahu until Israel halts all settlement activity in the West Bank and Jerusalem.

A longer border is shared with the Kingdom of Jordan on the East. Jordan is ruled by the Hashemite King Abdullah, whose father Hussein was the first Arab ruler to recognize and sign agreements with the State of Israel. Jordan lost the West Bank during the 1967 war with Israel. King Abdullah, under pressure from the events surrounding the Arab Spring is trying to reform his country of 6 million people, 92 percent of whom are Sunni Muslims. There are presently 2 million Iraqi and 2 million Palestinian refugees living in Jordan.

Israel’s Southern border is with Egypt. Since the days of Presidents Anwar Sadat and Hosni Mubarak, Egypt was at peace with Israel. However, after the fall of Mubarak from power during this year’s Arab Spring, Egypt is now falling under strong influence of the Muslim Brotherhood which originated in Egypt but was kept in check by the Sadat and Mubarak governments. Recent events show that terrorists will use the Egyptian route to stage attacks on Israel.

Gaza Strip is a small area of land squeezed in between Israel and Egypt. It is presently controlled by Hamas, the largest 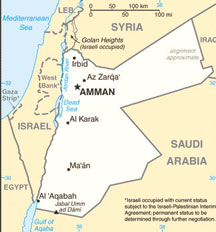 and most influential Palestinian militant movement. HAMAS is an acronym for “Harakat al-Muqawama al-Islamiya,” or Islamic Resistance Movement. The word “hamas” means “zeal” in Arabic. Since Hamas took control of the Gaza Strip, rocket attacks into Israel have increased by a huge margin.

Israel has managed to exist for almost 63 years in this very dangerous neighborhood. However, her very existence and future is now in serious trouble. Palestinians, taking notice of Israel’s number one supporter and backer United States’ present preoccupation with internal affairs; jobs, recession, downgrading of credit rating, etc., and taking solace from the events of the “Arab Spring”; unilaterally decided to bring up the issue of Palestinian Statehood to the United Nations. Knowing well in advance that any such decision by the UN will be vetoed by the USA; one may have to come to the conclusion that this is nothing more than a ploy to make the USA look bad in the international arena. This is a matter that the US Government should have prevented from happening earlier in the year; but did not. Faced with threats from the ever increasingly Islamist Turkish Government whose leadership is trying to exert its influence in the areas where they once ruled when they were called the Ottoman Empire; faced with the realities of the “Arab Spring” which brought about changes in Egypt and will no doubt bring major changes in Syria and Lebanon; Israel now must walk a tightrope and depend on her best ally, United States, to play a major role in preserving and protecting the delicate but most important sovereignty of the State of Israel. USA must continue to support direct negotiations between the Israelis and the Palestinians to resolve the issues of Palestinian Statehood and Israel’s long time security.

It is a very dangerous time in the Middle East. The expectations of the Palestinian people have been raised to their highest levels that they will be given Statehood by the United Nations. The American veto will obviously dash those hopes and expectations all at once as expected. This, coupled with the threats from her many unfriendly neighbors, will no doubt put Israel’s immediate and long term future as the lone democratic state in the area in serious jeopardy as well as putting America’s overall security in the area in doubt.