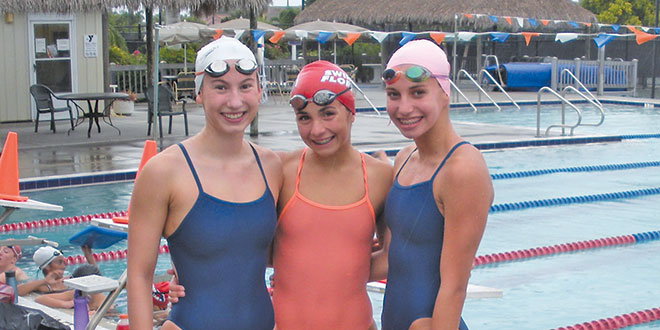 With just three swimmers on the MIA team, coach Kamal Farhat has made the most of their ability.

All three will compete in regional races at the Sarasota YMCA pool on Saturday, October 31.

Farhat, who had all three in his YMCA swim program, thinks all three have a chance to move onto state competition, in what he called the toughest of four regionals being held to qualify for state.

“If each can knock a half-second to a second off their times they will go to state,” he predicted.

Isles of Capri and Marco Island swimmers made a huge difference for Lely in the 2A-District 10 meet, qualifying for positions at the 2A regional competition on Thursday, October 29, at the Florida Gulf Coast University pool.

Regional competition was not completed by the Coastal Breeze news deadline for this issue.

The Delcompares of Isles of Capri showed their value to the team in leading Lely to a third-place finish for the boys and fourth place for the girls.

Luca, Grace Ann and Audrey Delcompares combined to earn key points and advance to the regional.

Individually, Luca, a senior, won the 200-yard freestyle and 100 butterfly. He joined Marco teammates, Andrew Smith, Hunter Angersbach and Morgan Kuphal to win the 200 freestyle relay, and second place in the 400 freestyle relay.

“The team has a chance to break a school record in the 200 freestyle relay,” coach Adam Peterson said.

Kuphal added a win in the 100 freestyle.

Grace Ann Luca, a sophomore, won the 100 butterfly and took third in the 100 individual medley.

Audrey Luca, a freshman, raced to second in the 100 butterfly and 200 individual medley.

The sisters teamed with Marco’s Madison Bonfito and Therese Pokorney to place second in the 200 free and 200 medley relays.

Qualifying for the regional meet in the 200 freestyle, was Marco’s Tatiana Meyers. She also teamed with Marco’s Ellen Angersbach, Kelsey Halaschak and Michaela Pinter to qualify in the 400 freestyle relay.

Peterson expects a number of swimmers to advance to the state finals, particularly Luca Delcompares.

Luca has the ability to go onto state for the third straight year. He has finished in the top 10 in the 200 freestyle and 100 butterfly both years. His goal is to medal at state, swimming into a top five finish.