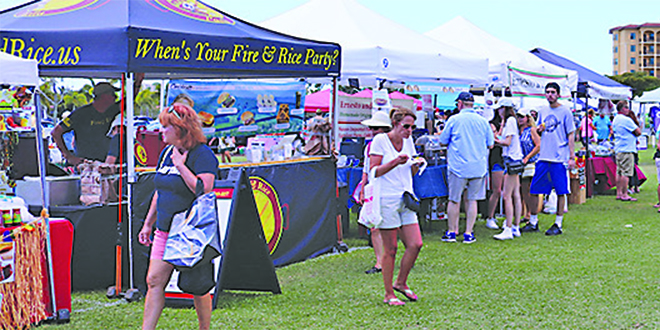 For over a decade now islanders and visitors alike have enjoyed the opportunity to avail themselves of a Farmers Market here on Marco. It has become a ritual of sorts that many look forward to on Wednesdays and make the drive over to Veterans Community Park to walk the grassy field to hunt for vegetables, fruits, exotic oils, flowers, jewelry and other treasures.

The market itself outgrew its original site in a church parking lot and then found a temporary home at Mackle Park, before moving into its longtime location at Veterans Community Park. “We felt this was a perfect location for the market,” said Samantha Malloy, who is now serving as the Manager of Parks/Recreation and Culture for the city. According to Malloy the venue has a total of 100 spaces available, while several vendors purchase two to three spaces to accommodate their offerings.

“This is a must for us while I’m here during season,” said Laurie Irving, who is here six months a year before returning to the Sebago Lake area of Maine. She was accompanied by her mother, Jean Duffy on a recent Wednesday morning. “We love shopping for the vegetables and seeing whatever else we can find,” said Irving. “Before we purchased on the island we came and visited other friends from Maine and they took me here and I was hooked,” continued Irving.

Barry Howe, longtime resident and well-known photographer was also positive in his statements regarding the weekly event. “It’s a wonderful venue for island residents and visitors. I just wish it would go on longer and would prefer to see it last at least a few additional months,” said Howe.

“I think many of our residents see it as much as a social gathering as a market,” said Councilman Bob Brown. “They love coming out and see their friends and updating each other on what is going on in their lives,” continued Brown, as he strolled through the market, stopping to talk to residents and friends.

Gaylord Carmean, who is affectionately known as the “Crab Cake Guy” sells out every week he is at the market. Carmean hails from Maryland, but is a longtime resident of the island. He has become known for his delicious Maryland crab cakes. He has fresh Maryland crab flown in every week, allowing him to make the cakes himself. On Saturdays he can be found at the Naples Farmers Market on Third Street. In addition, he has an exclusive agreement to supply the Speakeasy Restaurant on Marco for their Friday night Maryland Crab Cake Special.

For the 80 vendors that do attend the weekly market the season couldn’t have been better. The weather and the attendance were outstanding according to most we interviewed.

Dale Downey was very appreciative of the season so far. “Jimmy and I couldn’t have asked for a better season and greater people every week.” Dale and her husband Jimmy share two different spaces; she has her hot dog cart and Jimmy has his Wild Jimmy’s Sausage.

Tara Clark and her daughter Hope enjoyed a tasty treat as they strolled through the market that day, enjoying all of the booths. “We are down from Illinois for a little vacation and just love the market,” said Tara Clark as her daughter took a bite from their fruit bowl.

The Marco Farmers Market is open every Wednesday from 7:30 AM to 1 PM through the end of April, and then will reopen later in the fall.

For additional photos of the Marco Island Farmers Market and the fresh produce available, click here.