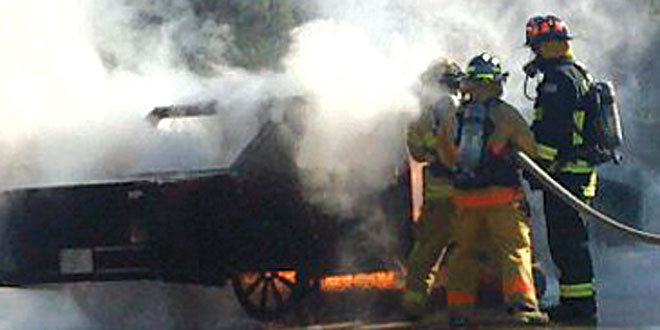 Ask any little boy what they want to be when they grow up and a chorus of similar answers will sound: policemen, astronauts, super heroes, secret agents, and, of course, firemen. Some of these career choices are more easily attained than others (i.e. super heroes) but they are all noble choices. Nicholas Macchiarolo of Marco Island was once one of these young boys. His profession of choice: fireman.

On August 3, Nicholas achieved his life long goal when he graduated from the North Naples Fire Academy. “My whole entire life I’ve wanted to be a fireman,” he states. “My grandpa was a fireman in Yonkers, New York and that always inspired me, but after 9/11, that’s what really got me into it.”

While Nicholas and his family moved from New York to Marco Island when he was only five years old, they still had many friends and family members that were affected on that tragic day.

“It took a lot of courage for those firemen to go into those buildings knowing they probably wouldn’t come out. I want to be someone like that,” he adds. “I just want to help people.”

Nicholas began helping others at the age of 15 by becoming an ‘explorer’ at the Isle of Capri Fire Station. Spending time at the fire house and accompanying the firemen on ride alongs, Nicholas “fell in love with the brotherhood almost more so than the actual firefighting.” His time spent with the firefighters on Capri solidified his goal to become a fireman.

After graduating from Lely High School, Nicholas moved on to Florida State Fire College in Ocala. When a brief injury pulled him from school, he 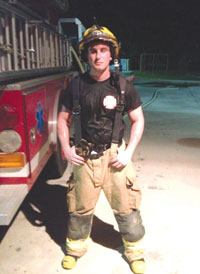 finished at North Naples Fire Academy which he called “a great experience.”

But it certainly wasn’t an easy one. “I could literally go to school until I die for this job and I still wouldn’t be done earning all the certifications that are possible,” he adds. As a firefighter, one is now expected to also be trained as an EMT. “Most stations actually prefer a paramedic these days,” a step above EMT level. Nicholas will be EMT certified once he takes a final state test. He then plans on completing his paramedic training.

As with any firefighter, Nicholas will tell you that earning that badge isn’t easy. “My advice is to be ready physically,” he says. “It’s not always about having the bulkiest muscles because the more muscles you have, the more oxygen you need which can sometimes make things more difficult. When you put on one of those suits, it’s heavy and the sweat has no where to go. It’s like a hot potato.” Learning to put on gear in record time, deal with extreme heat and breathe out of an apparatus, all while trying to feel your way through a smoke-filled building takes some practice – and guts.

This training is taught in what is called Firefighter 2; this course takes place outdoors, testing physical strength and technical skill when dealing with fires related to cars, propane and upper levels of buildings as well as basements.

Firefighter 1, which obviously comes first, is the book end of the job. For Nicholas, this came rather easy as he learned much of what he needed to know as an explorer with the Isle of Capri Department.

EMT training was a 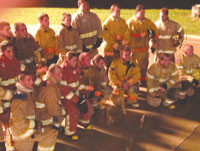 Nicholas and his graduating class.

little more difficult as Nicholas readily admits that in this course, one better be ready to study. Hands on action in the ER and a 72 hour shift on an ambulance accompany the class. As difficult as it was, “it’s awesome,” he admits.

As he waits to pass his final state exam, Nicholas is excited to begin his new career. Growing up on Marco and knowing so many local fire fighters, he says it would be a privilege to attain a position in the area. “I would like to serve the local community because, for me, it’s a big deal to give back. It’s also important for people to see familiar faces because everything is an emergency. It may not always be that way for us, but we treat it as such. When people call, it is an emergency to them and we are there to help.”

Nicholas also has his eyes set on fighting forest fires. “They are so unpredictable and there’s such beauty in that even though I know it sounds strange to say, but it’s that battle against Mother Nature that makes it so intense.” His ultimate goal is to become a Hot Shot; one of a very select few that is deployed to large fires, repelling from helicopters to fight the flames.

To be called brave or a hero is not what he is after; it’s simply the joy of helping others. From a young boy to an adult, Nicholas has understood the importance of being there for those in need because it’s simply the right thing to do.

Coastal Breeze wishes Nicholas Macchiarolo all the best as he begins his new career taming fires and saving lives.