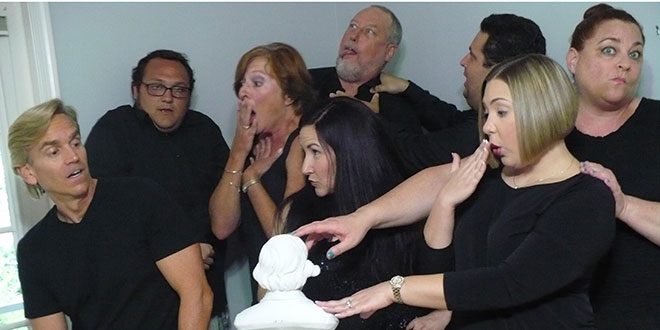 The Box Office is open and tickets are currently on sale for the Island Theater Company’s upcoming fall production of Stonewall’s Bust sponsored by Centennial Bank.

The Island Theater Company is delighted to bring you Stonewall’s Bust by John Morogiello (author of last year’s hit show Blame It On Beckett). Stonewall’s Bust will run from October 25th – November 8th. This year’s southern comic gem is about nervous New Yorker Paul Streyker who bites off more than he can chew when, while visiting his girlfriend’s hometown deep in Dixie, he breaks a priceless Confederate heirloom and lies about it. Paul’s attempt to save his own skin with a dubious story involving moans, chains, and a supposed poltergeist sets off a string of hilarious and dire events that threaten his career, his relationship, and his very life.

The cast of Stonewall’s Bust includes some island favorites along with some new faces to the theater.

Joe came to Southwest Florida twelve years ago from New York. He realized he wanted to pursue acting when in his teens. He has performed in many local theater productions in Naples and Marco Island. You may have caught him in Visiting Mr. Green, Come Blow Your Horn, The Fourth Wall or Les Liaisons Dangereuses.

Karen Frizzell-Anglin plays Nancy Weller, the small-town southern debutante, who has spent most of her years since high school living in New York and loving it.

Karen began her acting career in 1996 as Zaneeta Shinn in The Music Man under the guidance of her mother. She continued to perform locally in numerous plays throughout the years. Her most recent performance was in last season’s Always A Bridesmaid. Some of her favorite shows include Mama Won’t Fly, Butterflies Are Free, Lets Murder Marsha, Love Sex & the IRS and Afterlife Of The Rich and Famous, just to name a few.

Mai caught the acting bug at age 3. She is a graduate of Bennington College with a BA in Theater Arts. She is a veteran of the theater having appeared in many productions in Naples and on Marco Island, including favorites Art of Murder, Fiddler On The Roof, and The Odd Couple. She gave an amazing performance in the lead role of Myrtle Dyrtle in ITC’s debut production A Bad Year For Tomatoes. She played playwright Tina Fike in Blame It On Beckett and her most recent performance and personal favorite was in Always A Bridesmaid earlier this year.

Cheryl hails from New Jersey and has lived in Southwest Florida for 12 years. She is new to the theater with three shows to her credit, Afterlife Of The Rich and Famous, Fox On The Fairway, and Motherhood Out Loud. This is her first performance with the Island Theater Company.

Abby Yetter plays Bathsheba’s daughter, Kim Polk. Kim is the assistant editor of the town paper, an ex-cheerleader who is somewhat embarrassed by her poor past. She is pleased with her current success….particularly snagging Slab.

Abby began acting in community theater productions at age 5. She graduated high school early and completed her B.A. in 3 years and has a long list of credits in theater, film, television, commercials and voiceovers. She has been trained in acting, dance, and voice and has performed in numerous productions throughout Pennsylvania, New York and Las Vegas. Some of her favorite shows include Peter Pan, Annie, Oliver, Blame It On Beckett and Rumors. You may remember her as the vivacious blushing bride in last season’s Always A Bridesmaid.

Jared Wagner plays Slab, the town sheriff, engaged to Kim, and Nancy’s former high school love. Slab doesn’t trust Yankees, or liberals and is unable to distinguish between the two.

Jared Wagner is a graduate of AADA in New York and has an extensive background in theater. In addition to performing in over forty shows from South Bend to New York to Marco, he includes improv in his list of credits. He made his debut with ITC in last year’s Blame It On Beckett. He credits Robin Williams for influencing his acting career at age 13. Since then Jared has performed in numerous shows including favorites Les Miz, Hairspray, The Music Man, Beauty And The Beast and Blame It On Beckett. Jared is currently directing ITC’s children’s theater production of The Music Man.

John is a 4th generation Southwest Florida resident. He made his stage debut two seasons ago in ITC’s Mama Won’t Fly, where he had several signature parts. From there he jumped right smack into the lead role of middle-aged, disenchanted dramaturg, Jim Foley, in Blame It On Beckett. He tried his hand as assistant director for last season’s Always A Bridesmaid but decided he prefers acting.

Guy Glover is Earl’s Cameraman. Guy is a newbie to the theater. This is his first theater performance, although he has wanted to try his hand at acting since he was a child. Guy currently performs with the Stage 2 Improv group around Southwest Florida.

Stonewall’s Bust opens October 25th and runs weekends through November 8th at the Rose History Auditorium, 180 S. Heathwood, Marco Island at 7:30 with matinees on Sunday at 2:30.

Tickets are $20 and can be purchased in person at the Marco Island Historical Society Gift Shop, 180 S. Heathwood or Centennial Bank, 615 E. Elkcam Cr. They can also be purchased online at www.theateronmarco.com, by calling the ticket office at 239-394-0080, or at the door 30 minutes prior to each performance.

Group discounts are available! To reserve seats for a group of 10 or more, please call the Box Office at 239-394-0080 to make your reservations and receive 10% off on your order. Student groups receive additional discounts.

Additional cast information, show dates, and tickets, can be found at www.theateronmarco.com/ or LIKE their page on FACEBOOK at ISLAND THEATER COMPANY to stay up on all the latest news.