It’s beginning to look like season is coming to a close. The birds are on the out and the roads are slowly clearing up. Things will be getting back to normal soon. The beaches will go back to being nice, quiet places for burrowing owls and horseshoe crabs. The hot humid summer time gives the local musicians and entertainers a chance to kick back and write some new material for next year.

Island music has always carried a laid back vibe. It’s that style of music you listen to while you’re relaxing on the beach under an umbrella with a cold drink in your hand. Marco Island seems like it would be the perfect place to inspire island music. It is. Over the next couple of “tweaks,” I will be delving into some of Marco’s hidden talents. I think folks would be surprised to find that this little island has so many great musicians, and a lot of these musicians run with the island style of music. Veteran players like J. Robert and Frank Carroll, and the next generation of island style musicians, like bands SowFLow and The Sheffield Crew all call our tiny island home. This “tweak” we will be talking to local band SowFLo and legendary reggae singer/guitar player Frank Carroll.

“We don’t make music, we create movement,” is Naples/Marco Island based reggae group, SowFLo’s mantra. Hailing from what they call 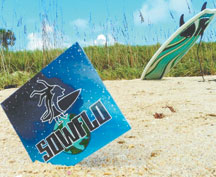 SowFlo is a laid back, island style band from the area that plays all over the state of Florida.

the “Paradise Coast,” SowFLo is a refreshing new take on today’s contemporary island music. With a distinct acoustic surf-rock/reggae sound, SowFLo brings a mix of “light hearted melodies, whole hearted lyrics and good vibrations.” Influenced and inspired by music by everyone from The Marley Family to Michael Jackson, Inner Circle, Matisyahu & Slightly Stoopid to SOJA & John Brown’s Body, these guys pull from all over the musical board.

SowFLo was conceived in 2009 when Jake Dorris and Joe Records linked up at a local party. Jake played the acoustic guitar and sang, Joe played the keyboard and produced. The two began collaborating, and everything fell into place soon after. Already amidst the local music scene, SowFLo was consummated when close friends, Andre Beaudette , playing drums & percussion, James VanDerHorst, on lead guitar, and Christian Yacono, playing bass and singing, pledged to the group. The band has done collaborations with artists such as Road Warrior, Corey Neilsen, and dancehall artist, Kyapi “the Don.”

The young reggae band recently released their debut EP, engineered by 4-time Grammy Winner Marc Lee and mastered by none other than Michael Fuller. The EP consists of: 1. Johnny West, 2. Gimme More, and 3. Paradise. SowFLo is currently recording their first full length CD and playing shows from coast to coast in South Florida. SowFLo made their first appearance in New York, on July 15th, performing live during the “2nd Annual Surf 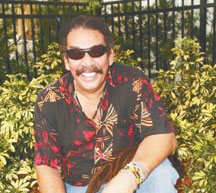 Together, SowFLo exemplifies and hopes to relay the message and lifestyle of being easy; “Everything is going to be alright.”

Follow SowFLo online at facebook.com/sowflo and twitter.com/sowflo. Find their debut EP on iTunes and amazon.com.

“Cool Runnings!” says Marco Island entertainer, Frank Carroll, about his “Island style” music, Frank has been playing what he calls “Conch Rock” on Marco since 1999. Originally from Nassau County, New York, the “Reggae Ambassador,” has jammed with the likes of Jimmy Cliff, the late, great, Bob Marley, and even recorded an album with reggae royalty, the Wailers. Over the years, Frank has been signed to a few different labels. He released his most famous album, “Leaders of the New World,” in 1985, on Virgin/A&M Records, while working with Chris Blackwell. That album also featured reggae greats, Junior Marvin, Judy Moet, and Tyrone Dorsey. Frank has lived and played all over the world, including a stint in the Bahamas, where he first met Bob Marley while he was recovering from his gunshot wound. He lived in Canada while working with band Chillerwack, and also called the Big Apple home, frequenting clubs like CBGB’s and The Cellar.

Frank Carrol, the Reggae Embassador, has gone around the world with his music.

back to when he used to hear his father play Celtic ukulele and banjo. When I asked him what was next for Frank Carroll, he said that he is just beginning his journey in music. Frank is working on building a high-end exclusive professional recording studio on a private island in the Bahamas, called Star Island. He says national acts like the Rolling Stones will be their clientele. These days, Frank can be seen playing his “Conch Rock” at The Marco Island Marriott, Saturday, Sunday and Tuesday evenings, at the Snook Inn on Monday afternoons, and at The Mangrove Bistro on Monday nights. His CDs are available at the live shows. You can find all the updated info on Frank at www.frankcarrollmusic.com or facebook.com as Frank Carroll.

Thank y’all for your intreats in local music and entertainment. Next “tweak” I will be talking to J. Robert, Sabrina and more local talent. As always, I love hearing your comments or questions, so send ‘em in, and I will be sure to read and respond.

Nate Augustus is a native “Florida cracker” and a singer/songwriter from the Marco/Naples area. His band, “Gator Nate & The Gladezmen” and his “One-Man-Band” can be seen at many local venues. He has released multiple albums on his record label “SwampSong”. For more info on Nate and his musical doings, go to www.Gladezmen.com or facebook.com/NateAugustus His latest CD “Gator Nate Augustus-Only Child Family Band” is available on CDBaby and itunes.