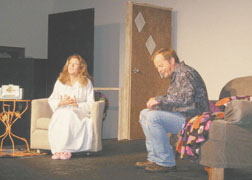 Kathy O’Brien and Scott Lilly play a couple only days away from their wedding.

The Island Players have just wrapped their opening weekend of “I’m Herbert… and Other Strangers.” This collection of one-act plays features different takes on love and family relationships during the 60s and 70s eras. Each act offers a different perspective, something that the relatively new Island Players Group strives for in all areas of their performances.

“I’m Herbert… and Other Strangers” is the third production for The Island Players. The collection of short acts, written by Robert Anderson, Renee Taylor and Joseph Bologna, begins with a young couple on their first date and ends with an elderly couple having troubles with their memory. In between these two acts, viewers will be entertained with acts pertaining to dating, marriage, infidelity and sex education.

The idea for this particular play was brought to The Island Players by Rich Joyce. Known for his directing skills with The Marco Players, Rich wanted to share his vision of “I’m Herbert.. and Other Strangers” with The Island Players.

As The Island Players strive to involve as much of the local community as possible, they are 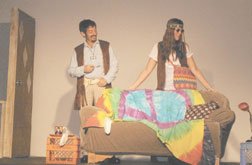 Kevin Moriarty and Rachel Gallentine perform as a couple on their first date.

always receptive to new ideas. This open, unstructured concept was formed by Pat Berry, Jean Rowles and Pattie Ziesig, all life-long theater lovers and participants. As Berry explains, “this is a community theater with a capital C! We encourage anyone who has a love for the theater to bring us their ideas, audition for our shows and volunteer for any and all behind the scenes aspects.”

The group is always open to partnering with local organizations as well as with some famous actors. This past Christmas, they hosted a children’s performance in collaboration with St. Mark’s Church on Marco. They have also recently received an original script from Walt Willey, an actor on the daytime soap, “All My Children.” They are currently working with Willey to produce his show near the end of March. Look for more information on this exciting event as March approaches.

The Island Players are working with the Marco Island Historical Museum. All of their performances are held on-site at the Rose History Auditorium. Lori Wagor, Events Director at the museum, along with the rest of 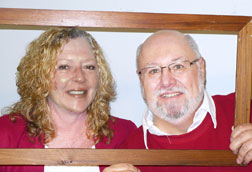 Mai Puccio and Richard Joyce play an elderly couple having trouble with their memory. SUBMITTED PHOTOS

the staff, have been more than accommodating to the new theater group. A larger stage, black-out screens, sound and lighting equipment, and movable stairs are brought in by the Island Players for each performance.

“I’m Herbert… and Other Strangers” will run the weekends of February 9 through the 12 and February 16 through the 18. Tickets are $18 per person and may be purchased at the Marco Island Historical Society Gift Shop, Centennial Bank on Marco Island, or online at www. theateronmarco.com. Seating is available on a first come, first serve basis.

This particular production is sponsored by Centennial Bank, which threw an opening night party for those in attendance on February 3rd. This included complimentary food and beverages along with a meet-and-greet with the cast. Each new show has a different local sponsor which is always accompanied by an opening night reception.

All performances are at the Marco Island Historical Museum’s Rose History Auditorium at 180 South Heathwood Drive. Evening performances begin at 7:30 PM and Sunday matinees begin at 2:30 PM. For more information along with personal bios of all the actors, visit www.theateronmarco.com