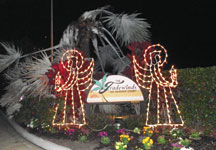 Angels keep watch at The Tradewinds, one of many locations they can be found on the island. SUBMITTED PHOTOS

Marco Island, are different than anywhere else in the world. Back in 1987, Dawn Norgren of Island Title was a single Mom. There was little to show her young son the spirit of Christmas here on the island. Other than Mrs. Marion Blomeir’s festivities at the Olde Marco Inn, Marco Island was void of any decorations. For your information: On her birthday, December 17th, The Bistro Soleil at the Olde Marco Inn will be having a special celebration in memory of “Lady Christmas – Marion Blomeir”.

Dawn and a group of seven core members of the Chamber of Commerce came up with the idea of doing something special to celebrate Christmas – thus was born “Christmas Island Style”. It started with only four events, the street parade, boat parade, craft fair and tree lighting ceremony in the Town Center. Dawn asked for some help from Dick Shanahan who was the County Commissioner. To her delight and surprise, Dick made an official proclamation and Marco Island was named “The Island of Angels”.

When asked what the Marco Angel means to her, Dawn was quoted as saying, “I love them. I’m an angel girl. I believe in angels and they are part of my spiritual life. The angels ensure that Marco will never run out of elves – the people catch the Christmas spirit every time they come across the beautiful Judge Jolley Bridge – whether to stay or just to visit.”

All along our main street (Collier Blvd.) banners on the light posts wish all a Happy Hanukah, Merry Christmas and Christmas Island Style. But it is at night that Dawn’s real vision comes to life. Angels grace the median as you cross the Judge Jolly Bridge. Condo entrances and private homes throughout the island glow with a special gift to us all, the Marco Angel. Today, Christmas Island Style is a private organization that works all year to prepare our island and us for this wonderful holiday season. Steve (Stef) Stefanides and Christmas Island Style Committee members coordinate all the events so we can celebrate the holidays not just one day a year, but throughout the entire month of December.

When asked what the angels mean to him, Stef expressed, “We are all from many different walks of life and have brought traditions from far and wide. Here with our balmy Gulf air and our feet buried in the sand, we don’t need snow, the Marco Angel represents the true spirit of Christmas.”

At Arturo’s Restaurant, co-owner Judy Barney said they purchased their Marco Angels seventeen years ago. That was when they also erected the huge Christmas tree in front of the building. Originally from New York, Judy was used to hearing everyone brag about Rockefeller Center. She said: “The tree and the angels turn our place into ‘Marcofeller Center’. The angel represents that Marco Island is an angelic place to be.”

Lori Passini of the Snook Inn said they purchased their Marco Angels in the 80’s as a sign of support for the community. “They (the angels) give a sense of community and pride and make Marco a better place to live and visit.”

Condominiums and homeowners also got into the spirit of Christmas by purchasing the Marco Angel to grace their entrances and their front lawns.

Gerald and Hilda Brosky of 160 Heathwood Dr. own two Marco Angels. Hilda said they purchased their angels twelve years ago when they first moved to Marco. They bought them to feel a part of the island. She also stated that she believes in angels and says they are a protective presence around us. Glancing around her beautiful home, I noticed angels of every size and configuration everywhere I looked. She is a true believer.

Martha and Philip Spaulding of 681 S. Barfield are proudly displaying a Marco Angel for the first time this year. Martha said the angel means a great deal to them. It was given as a gift from a neighbor as a token of good health for Philip.

You don’t have to own an angel to enjoy them. Marv Needles of ERA Flagship Realty said: “Before the inception of ‘Christmas Island Style’, there were few signs of Christmas on the island. They represent the unity of the island, sharing the Christmas spirit with all of us.”

Marie Johnson of Edgewater Ct. said “I love the angels. Sometimes Christmas seems so commercial and we lose the religious significance. It is nice to see public displays of the angels so we have at least a little bit of religion in the City’s decorations. Muslims, Christians, Catholics, Jews; we all believe in angels. It’s a start of coming together.”

Joe Charde of Oneir Charde Group Realty had this to say: “I feel the Marco Angel represents the miracle of Jesus Christ’s birth and God’s gift to mankind. Also to remember to keep Christ in Christmas and that Marco Island is a gift and a miracle for many. We count our blessings every day.”

Jean Duling of Duling Design responded to an email I sent out asking people what the Marco Angel meant to them. Her response was: “Ever since the Chamber of Commerce declared this island the Island of Angels, it would not seem like the holiday season without them. It gives me a feeling of peace when seeing them and I eagerly wait to see them on the various properties on the island at this time of year. It inspired me to make a Christmas card with the Marco Angel one year and it is on the A page in the coloring book I designed ‘Marco Island A-Z’. As a lover of angels, I have always associated the Abba song with Marco. They say in their recording of ‘I Have a Dream’, I believe in Angels. That says it all.”

Thanks to our custom jeweler on the island, The Harbor Goldsmith, you can also wear a little Marco Angel around your neck. They have two locations, one in The Marco Walk on the corner of Collier and Winterberry and their new location in the Island Plaza between CVS and Bealls Outlet.

Orders for the Marco Angel can be placed in the summer. They are delivered to a commercial site in early fall, and Stef and his crew will deliver to your home or business by Thanksgiving. Prices vary year-to-year on production and shipping costs, but if you want a Marco Angel on your lawn or at your place of business next year, email Stef at ChristmasIslandStyle@comcast. net and place your order this summer.

There are too many angels now for me to take pictures of them all. Please do not be upset if yours in not among the pictures here. Isn’t it wonderful there are so many? To me the angels represent love and unity. My heart is warmed by the sight of them and I am grateful everyday for the privilege to live on this beautiful island. There isn’t anywhere else in the world I’d rather be on Christmas. Thank you, Dawn for your inspiration, to the early Chamber of Commerce for sharing her vision and to Steve Stefanides and the whole Christmas Island Style Committee for your efforts in continuing Dawn’s dream and making our island truly the “Island of Angels”.

Happy Holidays to all!