Island of Angels, a short story 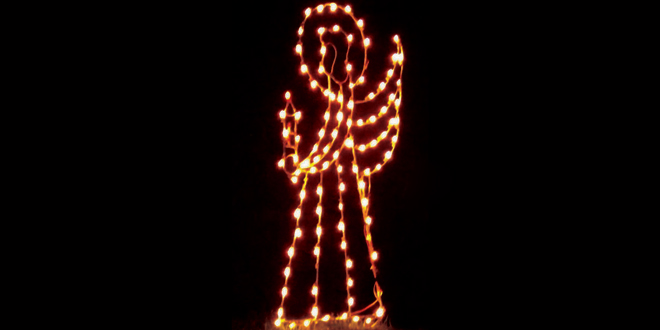 A WORK OF FICTION: Island of Angels, a short story

The young girl hunched down in the backseat of the car. Her nose almost touched the screen of the I-pad she balanced on her lap. Bright pink ear buds blocked out the other sounds in the car. As the car approached the crest of the Judge Jolley Bridge, her mother hollered to her above the music pounding in her ears. “Liza, look, an osprey.”

Liza lifted her head just as the bird spread its wings and took flight above the sparkling blue water. She watched as it flapped twice, and then glided on the wind. It headed across the island into the setting amber sun where the high-rises in the distance danced on the water. “Nice,” she said somewhat sarcastically and buried her red-capped head back in her lap.

This was not Liza’s idea for a Christmas vacation. Who ever heard of Christmas without snow, or friends or blazing fireplaces? If they had to go to Florida, couldn’t it be Disney World? No, Mom and Dad said it had to be Marco Island. Liza knew what this was really about. It was about saying good-bye. They thought she didn’t know, but she wasn’t a baby. She had looked it up on Google. Lymphoma. The chemo had only made it worse. She threw up all the time and her long blonde hair fell out in clumps until she just shaved it all off and stuck a cap on her head.

Gram’s house was cool and it had a big pool right off the back door inside a huge cage. Liza could open the doors and walk straight into the water, if she only had the strength. Even with a big artificial tree, and lots of lights on the house, things still did not feel like Christmas.

On the second night, Gram announced that she was taking Liza out to see the town. “Big deal,” Liza thought. “This town sucks. I’d rather be back in New York with my friends.”

As they rode down Collier Blvd, Liza noticed the angels. Beautiful silhouettes of praying angels lined the street in front of building after building of condominiums. They turned down Barfield, then San Marco, then Bald Eagle. Hundreds of angels graced the lawns of pretty homes and businesses. “What is this Gram? What’s with the angels?” Liza’s heart began to soften and a lump formed in her throat.

Her grandmother smiled at her. “This is the Island of Angels, don’t you know that?” She pulled the car up the steep drive to the Marriott Hotel and handed the keys to the valet. “Come, my dear. I want to show you something.”

Liza and her grandmother entered the lobby of the hotel. The most beautiful tree Liza had ever seen filled the room, surrounded by dozens of red poinsettias. They descended the stairs and exited the double doors into the courtyard. A wedding reception was taking place and Liza smiled at the bride and groom surrounded by their friends and families seated at white linen tables. Passed the party, passed the pool, passed the restaurant on the beach, Liza walked arm-in-arm with her grandmother toward the shoreline. Those who observed them would not have known who was supporting whom. They kicked their shoes off as they reached the soft sand. The salt air tickled Liza’s nose. When the only sound left was the surf lapping on the beach in its own rhythmic beat, Gram spread a blanket and they sat down, shoulder to shoulder. The breeze from the Gulf was cool and Gram lifted the edge of the blanket to wrap them together in a cocoon.

Thousands of stars lit of the sky and the moon’s reflection pirouetted over the water. Liza leaned her head on to her grandmother’s shoulder. “This is beautiful. Thank you for bringing me here. Tell me, Gram, why do they call this the Island of Angels?”

“Because it is.” Her grandmother stated rather matter-of-factly. “Hundreds of years ago, the Calusa Indians knew this, and that is why they settled here. Angels look over this island and keep it safe. When big hurricanes like Wilma and Charlie, or Katrina and Sandy blow toward this island, the angels all get together and flap their wings at the same time and blow the worst of the storms away.”

Liza snuggled a little closer. “Do you think angels are people that have died?”

Her grandmother thought for a moment. “No, I believe they were created to always be angels, that they are immortal, with no beginning and no end. They just are. But there is something else they do, Liza. They also blow away fear.”

Liza lifted her head off her grandmother’s shoulder and looked into her eyes in the moonlight. “How do they do that, Gram?”

“If you are afraid, just sit very still and quiet. Listen for them and they will come. When you hear the flapping of their wings, you will know that they are lifting your fear and taking it away.”

Christmas morning, Liza was too weak to open her gifts, but a special gift hung by a silver chain on the tree; a Marco Angel bowing with a candle in hand. Her grandmother hooked the clasp of the chain around her granddaughter’s neck. Liza looked up at her and pressed the angel to her chest. “I can hear them, Gram. I hear their wings. I am not afraid.”