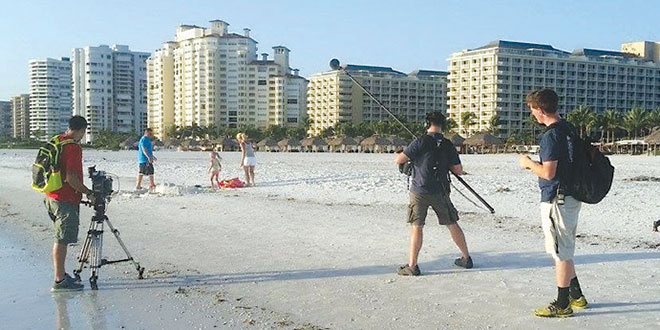 Kevin and Amanda Ray and their daughter Alyssia, ofIowa, enjoy some beach time on Marco Island.

The allure of Marco Island’s upscale, subtropical, waterfront lifestyle will once again be on display for a national audience thanks to HGTV.

“Island Life,” the cable network’s new show that depicts the experiences of families moving to their island dream home, has filmed two episodes on Marco this month. The show follows the families during their realtor-assisted search for a home that fits into their budget, whether it be something ultra-affordable or the sky’s the limit.

The show also shines a light on each island’s natural wonders, dining, shopping and other amenities.

Thus far, the show has featured such destination locales as Martha’s Vineyard, the San Juan Islands in Washington, Islamorada, Nantucket Island and Georgia’s St. Simons Island, for families leaving behind homes in Atlanta, Hawaii, Kodiak Island in Alaska, Boston, Pittsburgh and other locations.

How did Marco come to be included?

is really a cool place. With the show, we not only follow the client’s house buying experience, but we also showcase the particular island, and all the places and activities that there are to do there.”

After selecting an island that is of interest, the show researches and then contacts local real estate agencies in search of interesting home shoppers to profile.

“Then we reach out to their clients to find out if they’re interested in sharing their buying story with us and if they would like to be on the show,” said Hatta. “We look for fun and interesting couples and, or, families of all different types and backgrounds who are really looking to give up life on the mainland,

for island living, and all the adventures and excitement that come with it.

On Marco, the show has worked with realtors Scott Needles and his sister, Stacy Needles Witthoff, of The Needles Group at ERA Flagship Real Estate, and two of their clients.

“I think it is a great honor to represent Marco Island on HGTV,” said Needles. “It is great experience and could potentially bring more exposure to our beautiful island. It is great to be chosen out of all the many agents on Marco.”

The Marco episodes will profile the Rays, who come to the island from Kentucky, and the Pellegrini family, who leave behind a home on New Hampshire’s Atlantic coast.

“Both families expressed that the harsh winters and the

Scott Needles, left, of The Needles Group at ERA Flagship Real Estate, chats with Kevin and Amanda Ray and their daughter Alyssia, of Iowa at Mango’s. SUBMITTED PHOTOS

lack of time outdoors throughout the year are the main factors for them making the move down south,” said Hatta. “All of our families are really looking for that outdoor lifestyle and year-round access to the outdoor amenities, like water activities (sailing, surfing, paddle boarding, etc.) and beaches that Marco Island has to offer.”

Marc Pellegrini, his wife Mirian and their daughter Alexia, 8, became Marco residents last week, moving into a townhome, for now, while they wait for their home in New Hampshire to sell.

“We have friends that live on the island and we came and visited them, and we fell in love with it the first time we were here, so we decided to move here,” said Marc

Pellegrini, a consultant who works from home. “What really attracted us was the fact that you can have a home on the water at a, relatively speaking, reasonable price. You don’t have to spend millions to be on the water here. We love the beach – Alexia loves the beach – and the climate is obviously a big thing for us, coming from New Hampshire.”

Needles had some initial nervousness over being on-camera, but the butterflies quickly disappeared and he enjoyed the experience.

But there was no apprehension for his sister. “I really wasn’t nervous because it just felt natural, having worked with so many buyers over the years,” said Stacy Needles Witthoff.

“I just let the conversation flow like I normally would when representing a buyer. Overall, it was a lot of work, but in the end it was interesting to see how a show like this comes together.”

Marco’s inclusion among the islands featured on the show speaks volumes about the community’s appeal, said Witthoff.

“It is a beautiful place to live and people that live here sometimes don’t appreciate how great it is to live here,” she said. “The couple moving here is a young family and Marco is not only a retirement place, but also a great place to raise a family.”

The episodes shot on Marco in early August should air in January.