Is your serving alignment up to par? 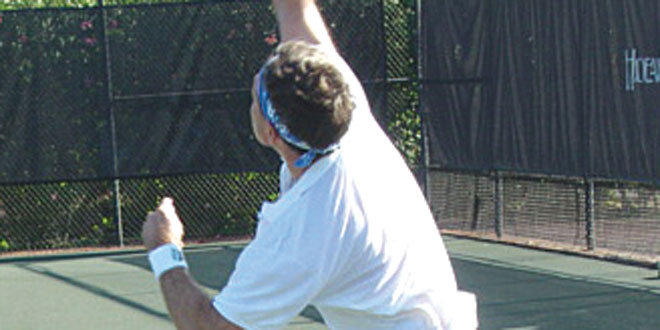 As long as I can remember, none of my coaches focused on my footwork on the baseline when I was serving. To me, this lack of detail is a little perplexing; a tweak here or a tweak there could alter the serve in a positive direction. Tennis is such a geometric game and the angles are so tight with little margin to hit the perfect target. Let’s take a look at a few different scenarios and analyze each one.

The basic formation I was taught had me put my feet as close to the middle line as possible. In my era, we served and volleyed on every possession so it was crucial to serve in the correct areas to gain the edge. As we scrutinize my Deuce Court positioning, my direct line of sight had me looking right down the middle, or near the “Texas T,” for my ultimate service target. Ironically, this area is quite small and rather difficult to navigate, perhaps too risky during a vital point.

As we delve into the Advantage (ad.) Court, we are faced with a similar dilemma. Again, with our body situated right next to the center line on the baseline, we tend to look right at the “Texas T,” however, we could argue that we may focus on the body serve or half way into the service box. In either case, there have to be better alternatives than to stand right next to the center line. Remember, sometimes it is the smallest changes that net the biggest results.

Instead of placing the body on top of the center line, move the server three or four feet away from the 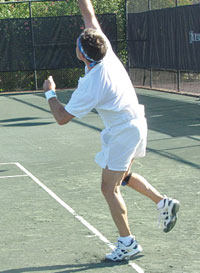 middle. My favorite aspect of this new serving alignment is two-fold. One: The service stance allows the player to continue to enhance the flat serve or cannonball serves down the “Texas T” area. Two: With this simple alteration, the server now feels more comfortable to aim or target the corners of the service box.

Why will these specific modification net big results for the server? Without a doubt, angles are easy to maneuver when the player is at or near another angle. Now, with this stance alignment change, the serve can vary his selections and keep his opponent off-guard. Serving is similar to pitching; one’s ability to deceive the receiver (batter) will have the player one step slower. In this particular case, the receiver will not be able to put their weight into the stroke and hit offensively.

Every great server knows how to continually change their placements as well as their power and spin. The bottom line is to not let the returner get comfortable.

What if the server makes a drastic alignment change and moves to the end of the baseline near the doubles alley? The top reason I do not coach this precise service footwork alignment is that the server is vulnerable to two different returns. One: With the player so far to one side of the court, the returner is tempted to hit a down the line lob and then come into the net. To me, this is the perfect strategy; the server must move at least 25 feet to get to the ball and make a quick decision. Two: Another concern is when the receiver returns the ball crosscourt, his ball moves right at 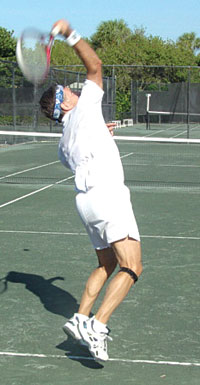 the server. In other words, with the server so far to one side (near the alley of the court) he is not really moving to the ball so he can be in a rhythm. Earlier when we discussed my favorite serving alignment, the player is in great position to serve and then move easily to the crosscourt return. But, with this radical serving alignment (server stands near the alley) the player is squeezed too tight when facing a relatively easy crosscourt ball.

And, there is one bigger negative when the player serves near the alley area. With the server standing near the right side alley (Deuce Court) or close by the left alley area, (Ad. Court) players tend to hit their serves crosscourt. Keep in mind, when servers become predictable with their crosscourt serves, the receiver will pick up on this trend and begin to capitalize. I am well aware there are exceptions to every rule, so it is vital for all competitive players to experiment and find the right fit for you.

In summary, my number one recommendation for serving alignment is to place your body approximately four or five feet from the exact center line of the baseline area. It is my belief that this position offers the most advantageous angles throughout a long tough match. Let me know where you prefer to serve and why. I look forward to your feedback.