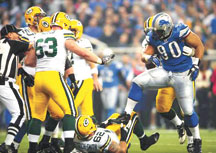 On Thanksgiving Day, of all things, Detroit Lions defensive star Ndamkong Suh lost his cool and stomped on his opponent’s leg well after the whistle had blown the play over. It was bad enough that this young player affected his team’s ability to win the game but during an interview hours later, he tried to justify his poor judgment. Unfortunately, this recent display of poor sportsmanship is not an isolated incident. We continually observe excessive acts of athletes behaving badly. In tennis it often starts out with a small gesture as the opponent does not hit the ball back to the server. Instead, due to his immaturity, he slams the ball away from the server and disrupts the flow of the match. Although it is common, too often we view players making horrific line calls. It is one thing to make an innocent error but when the score is close, the eyes of the player seem to change when it is a break point or game point! Is it a coincidence or a planned act that when the game-score is tight so are the line calls? When questioned about the shaky line call, the offender often compounds the issue and makes an offensive statement which always angers his foe. As a coach, I always advise my players to be gentle with their delivery when they argue a call.

More often than not, an opponent will not feel threatened when we politely challenge a court decision. Regrettably, we have observed far too many boys throw their rackets as they miss a shot. Recently, I was stunned when I viewed an adult toss his racket when his PARTNER missed the stroke! I don’t know about you but I’d like to believe that I would walk off the court if my doubles partner lost a gasket if I made a mistake. Luckily for this player, his partner is such a good guy that he chose to hang in there and play on.

Another annoying habit tennis players are guilty of is to yell loudly after an error. Even if the player does not use foul language, he is clearly interrupting others in his quest to vent his temper. In other words, this narcissistic player is completely oblivious to the action around the facility as he goes on and on and on with never-ending chatter. Apparently, this tennis player is so insecure that he just can’t handle the stage and must vent loudly when the pressure mounts. Often, the person is a true pretender; he thinks he is far better than he is and just can’t live up to the expectations.

When you witness a player or players who demonstrate a complete lack of sportsmanship, don’t sit back idly. Immediately report the poor sportsmanship to the head tennis professional or pro shop staff and demand action. On another cheerful note, did you know the Marco Island mixed up doubles league is starting in January? Now, in its third year, Island pro Howie Burnett is proud to announce that the league is growing. If you are interested in playing in this fun, yet competitive, league, (4.0 levels and high- er!) call Mr. Burnett at the Island Club tennis pro shop.

Did you know that the Marco YMCA is running another great tournament next week? Are you aware of our community tennis web site? Please check out www. MARCOCOMTENNIS@HOTMAIL. COM and learn more about future tennis events.

Now, if you want to be really organized, there is the 2nd Annual Hideaway Beach Open doubles event with the following levels: 3.0, 3.5 and our new division 4.0! One question pros often hear is whether players are allowed to ‘play up.’ Ironically, it is beneficial to not be rated TOO high! A surging new 2.5 player may play in the 3.0, 3.5 or 4.0 level. So, if you are entering your next tournament, please consider playing up if you continually dominate at your current level.

When tournaments, like the Hideaway Beach Open, offer at least two matches for the money, playing up is a great alternative. So, in the next four months, there will be great tournaments at Hideaway Beach, Island Club, Marco YMCA and the Marco Racquet Club…Stay tuned!